Pronouncing what may seem like a patent truism, the Supreme Court ruled unanimously on Thursday that biotech researchers have to create something to get monopoly protection to study and apply the phenomenon.   Because Myriad Genetics, Inc., “did not create anything,” the Court struck down its patent on isolating human genes from the bloodstream, unchanged from their natural form.  Because Myriad did create a synthetic form of the genes, however, that could be eligible for a patent, the Court concluded.

The decision was a major blow to a company that believed it had a right to be the sole user and analyst of two human genes, mutations in which show a high risk, for women found to have them in their blood, of breast and ovarian cancer.  But the ruling will give medical and scientific researchers, and family doctors, greater opportunity to help women patients discover their potential vulnerability to those types of cancer.

In a way. the ruling was a silent tribute to screen actress Angelina Jolie, who recently gained huge notoriety not for her acting but for voluntarily having her breasts surgically removed after discovering that she had the threatening mutations in her body.  She, of course, was able to pay the high cost of that test; now, women of less means will be able to afford it, and that was a key motivation for challenging Myriad’s patent rights. 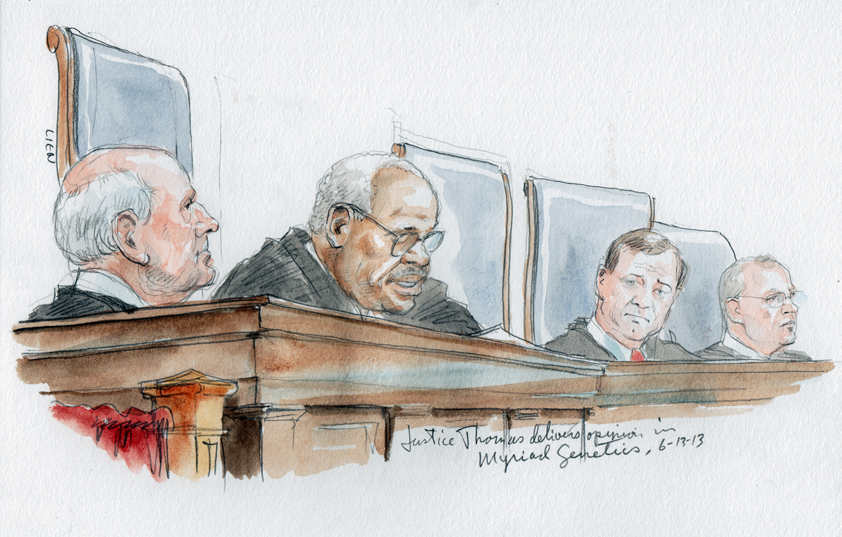 Justice Clarence Thomas’s opinion for the Court ran only to eighteen pages, but those were densely packed with virtually impenetrable references (for the lay person) to such things as nucleotides, covalent bonds, introns, exons and pseudogenes.  Many readers no doubt will share the view of Justice Antonin Scalia, in a short, separate opinion refusing to join in a section “going into the fine details of molecular biology,” of which he said he had neither knowledge or belief.  Scalia said he did understand enough to accept that naturally isolated genes are different from synthetic ones, and that makes a difference in patent law.

The scientific and legal key to the Court’s denial of patent protection to isolated, natural forms of DNA were these sentences: “It is undisputed that Myriad did not create or alter any of the genetic information encoded in the BRCA1 and BRCA2 genes. The location and order of the nucleotides existed in nature before Myriad found them.  Nor did Myriad create or alter the genetic structure of DNA.”

While that was not disputed, because the legal controversy focused rather on what Myriad claimed it did to locate and then isolate the forms of genetic DNA, those agreed-upon factors were enough to convince the Court that “Myriad did not create anything.”   As Justice Thomas commented further: “To be sure, it found an important and useful gene, but separating that gene from its surrounding genetic material is not an act of invention.  Groundbreaking, innovative, or even brilliant discovery does not by itself satisfy the [patent law] inquiry.”

The opinion conceded that Myriad probably did create something when it synthesized DNA, in a form that it called “complementary DNA,” or cDNA.  The challengers to Myriad on cDNA had contended that the sequence in that form had also been dictated by nature.  That may be so, Thomas said in reaction, “but the lab technician unquestionably creates something new when cDNA is made.”

The opinion said in a footnote, however, that the Court was not actually ruling that cDNA is specifically entitled to a composition patent, and noted that the federal government had raised other objections under patent law to that phenomenon.

The Thomas opinion went out of its way to make the ruling seem narrow, indeed — that is, virtually confined to the scientific specifics of what Myriad had done on natural genes and on synthetic versions.  The opinion said that the Court was not ruling on any right to a patent on methods of manipulating the genes, and was not ruling on any applications of what Myriad had learned about the two cancer-suggesting genes, BRCA1 and BRCA2.   Further, the Court had not passed upon the patentability of altering the genetic code in specific DNA forms.