The Port of Los Angeles, the nation’s largest port and an independent division of the city, requires trucking companies to sign standard-form “concession agreements” before operating on its premises.  In American Trucking Associations, Inc. v. City of Los Angeles, Justice Kagan’s opinion for a unanimous Court held that two of the agreements’ provisions are preempted by the Federal Aviation Administration Authorization Act (FAAAA).  The Court deemed premature, and declined to answer, a second question on which it had granted certiorari: whether the Court’s 1954 decision in Castle v. Hayes Freight Lines, Inc. bars the Port from excluding trucking companies for violations of other, non-preempted provisions.  All around, this was a narrow ruling. 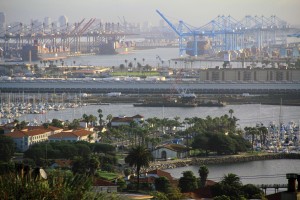 The parties’ dispute arose out of the Port’s Clean Truck Program, which it implemented to address community and environmental opposition to its expansion plans.  The mandatory concession agreements with trucking companies formed one part of this expansive program.  Only two of the agreements’ more mundane requirements were at issue by the time the case reached the Court. The first required trucking companies to post a placard on each truck providing a phone number to call with safety or environmental complaints.  (In explaining that provision, Justice Kagan included a subtle tribute to 1980s pop, using the number 867–5309 as her example.  This song will be hard to get out of your head.)  The other provision at issue required trucking companies to submit an off-street parking plan for all permitted trucks.

As described in more detail in my preview, the first question presented in the case – and the only question the Court decided – was whether, as the Ninth Circuit had held, these two contract provisions are saved from FAAAA preemption by some version of a “market participant” exception applicable when a government entity functions as a market actor.  The Port had located such an exception both in the statutory text, which preempts only state actions “having the force and effect of law,” and in a potentially broader, freestanding market participant doctrine.  And the Port claimed it had acted in a market capacity here, because the concession agreement was essentially a private contract that the Port created for business reasons.  Petitioner American Trucking Associations (ATA) disputed the existence of any freestanding market participant doctrine and anchored its argument to the statutory text.  It argued that the contract provisions plainly have “the force and effect of law” within the statute’s meaning – and are therefore preempted – because they are enforceable by criminal penalties.

ATA’s argument carried the day, with the criminal penalties emerging as the critical factor.  The Court did agree with the Port’s “premise”: that the FAAAA’s force-and-effect-of-law clause applies only to a “State acting as a State,” and not a state acting “as any market actor.”  “But that statutory reading gets the Port nothing,” Justice Kagan continued, because the Port here “exercised classic regulatory authority.”  While the Court acknowledged that the distinction between regulatory and proprietary action is a “rough line” with “soft edges,” it found this case to be an easy call: threatening “the hammer of the criminal law” counts as regulatory conduct “if anything does.”  It matters not, the Court continued, if the Port’s motives were business-related; the availability of criminal sanctions decides the question.  The Court therefore did not need to address in any detail the parties’ arguments regarding what a test for market participation might look like.

The Court could have gone further and addressed the Port’s argument that, beyond the statutory text alone, a freestanding market participant doctrine imposes a barrier to preemption.  But the Court concluded in a footnote that it had “no occasion to consider” that possibility, because the Port had emphasized the statutory approach at oral argument.  Thus, in resolving the preemption question, the Court favored a narrow path in two ways: by finding it unnecessary to describe any metes and bounds of market participation beyond the dispositive factor of criminal penalties, and by avoiding the potentially broader question whether a freestanding exception exists.

As noted, the Court had granted certiorari on a second question, regarding the effect of Castle.  That decision held that a state could not bar a federally licensed motor carrier from state highways based on prior violations of state safety regulations.  According to ATA, Castle forbids the Port from denying access to trucking companies that violate any non-preempted requirements of the concession agreement.  But the Court “decide[d] not to decide” the question.  As the Court’s opinion observed, the parties agreed that the Port could deny access to trucks contemporaneously in violation of the agreement’s requirements, so the real question was whether the Port’s enforcement scheme entails anything more than that.  “[G]iven the pre-enforcement posture of this case,” the Court explained, answering that question now would be “a shot in the dark.”  This represented a modest victory for the Port, which could have found its enforcement powers significantly hamstrung by a broad ruling under Castle.

Justice Thomas joined the Court’s opinion in full and added a brief concurrence questioning the FAAAA’s constitutionality.  He expressed “doubt that Congress has . . . authority” under the Commerce Clause to regulate apparently intrastate matters like the parking and placards of the trucks at issue.  This doubt echoes Justice Thomas’s preferred approach to Commerce Clause questions, but does not signal a likely direction for the Court any time soon.

The decision in Plain English:

The Port of Los Angeles imposed mandatory contracts on trucks wishing to operate on its premises.  The Court held that because two challenged provisions of the contracts – requiring the trucks to carry a placard providing a number to call with complaints, and requiring the trucking companies to submit an off-street parking plan for each truck – have “the force and effect of law,” they are preempted by the Federal Aviation Administration Authorization Act.  The Court chose not to decide a second question regarding the scope of the Port’s ability to bar trucks from entering its premises.