By the numbers: Update on OT11 and an updated Stat Pack (CORRECTED)

Pace of Grants. The Court is well under its normal pace of grants for the current Term. There are currently 15 petitions granted for OT12, plus one case held over from OT11, Kiobel v. Royal Dutch Petroleum Co.. By the same point in past years, the Court had granted 28 cases (for OT08), 29 cases (for OT09), 24 cases (for OT10), and 19 cases (for OT11). As Tom has mentioned during recent live blogs, Court watchers expect the Justices to significantly increase their pace of grants as the Term wraps up over the next month. 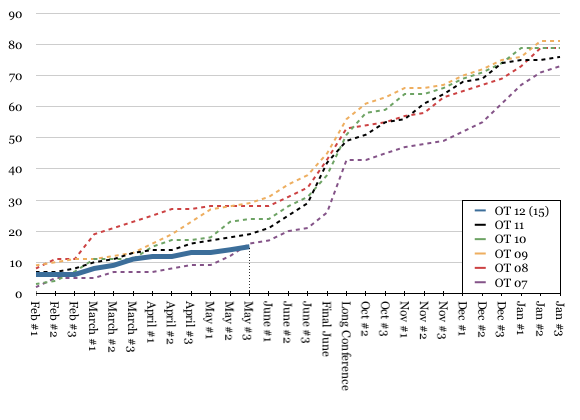 Pace of Opinions. The Court’s pace of opinions has been far more rapid. The Court has decided 58 total merits cases, more than in any year during the Roberts Court except OT08, when it decided 59 cases by the same point, and OT09, when it equaled the current pace with 58 cases decided. 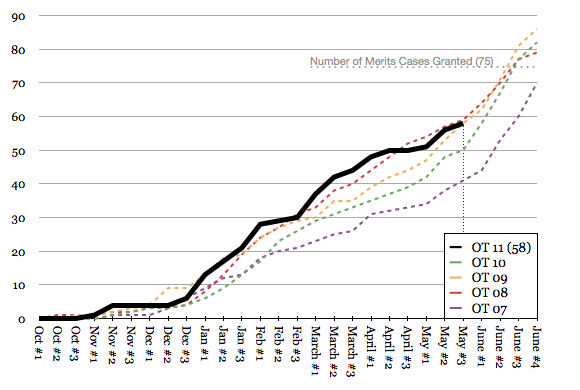 Advocates. Elite members of the Supreme Court bar have had a good year. Paul Clement leads all advocates in private practice with nine appearances, including appearances in cases such as Perry v. Perez, Arizona v. United States, and three times during the Affordable Care Act cases. Carter Phillips had the second-highest tally with five arguments, matching his impressive tally from last year and leaving him tied with Clement for the greatest number of appearances over the past two Terms. Gregory Garre argued four times during OT11, Patricia Millett argued three times, and several lawyers argued twice. Below you can see a table of all advocates outside of the Solicitor General’s office who argued two or more times during the current Term.

You can find a complete list of the advocates who argued two or more times during the Term, including advocates from the Office of the Solicitor General, on page 11 of our latest Stat Pack or here.

Stat Pack. We have once again expanded our Stat Pack and included several new charts. This edition reflects all opinions and orders released to date. You can find it here.

Corrected June 1 at 10:00am: There have been corrections to the following sections: Circuit Scorecard, Frequency in the Majority, and Voting Alignment. There was a typographical error on the Advocates page that has been fixed. The PDFs above have been updated to reflect these changes.