Concepcion and the Arbitration Fairness Act

The following is the first contribution to our online arbitration symposium. The author, Christopher R. Drahozal, is the John M. Rounds Professor of Law and Associate Dean for Research and Faculty Development at the University of Kansas School of Law.Â  He is an Associate Reporter for the Restatement (Third) of the U.S. Law on International Commercial Arbitration and served as the Chair of the Arbitration Task Force of the Searle Civil Justice Institute.

Of course, the political realities are such that Congress is unlikely to enact the AFA. Â A more likely regulatory response would come from the Consumer Financial Protection Bureau (CFPB), which is authorized to â€œprohibit or impose conditions or limitations on the use ofâ€ pre-dispute arbitration agreements in â€œconsumer financial product or serviceâ€ contracts â€œif the Bureau finds that such a prohibition or imposition of conditions or limitations is in the public interest and for the protection of consumers.â€Â  The CFPB could adopt a narrower version of the AFA in response to Concepcion, limited to contracts within its regulatory authority, so long as the statutory prerequisites were met.

So is enactment of the Arbitration Fairness Act (or a narrower version thereof by the CFPB) an appropriate response to Concepcion?Â  I focus on the core holding of Concepcion: that the Federal Arbitration Act preempts state court decisions holding class arbitration waivers unconscionable.Â  Certainly enacting the AFA would address the concerns of consumer groups that businesses might use arbitration clauses, combined with class arbitration waivers, to reduce or eliminate the availability of class relief.Â  If pre-dispute arbitration clauses are unenforceable in consumer contracts, then such clauses cannot be used to avoid class relief.

But enacting the AFA would be an overbroad response to the Courtâ€™s decision in Concepcion â€“ it would do more than simply reverse Concepcion â€“ for two reasons.Â  (Note that for the rest of this post I take as a working assumption that Concepcion should be overruled.Â  That assumption itself is an issue worth debating, but it is not the subject of this post.Â  My point here is that, even assuming Concepcion should be overruled, a ban on pre-dispute arbitration clauses is an overbroad way to do so.) 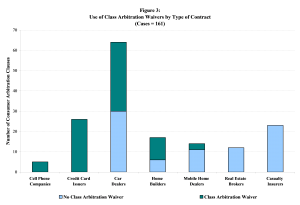 Second, using the Arbitration Fairness Act to reverse Concepcion would be an overbroad response for another reason:Â  it would establish a uniform federal rule rather than permitting states to adopt their own regulatory approaches. Â (Indeed, the same point would apply to narrower regulatory responses to Concepcion, such as requiring all consumer arbitration clauses to permit class arbitration or excluding class actions from the scope of consumer arbitration clauses.Â  While such approaches would avoid the first type of overbreadth discussed above, they would still replace a diversity of state approaches with a uniform federal rule.)

Prior to Concepcion, states had taken differing approaches to the enforceability of class arbitration waivers.Â  Thus, while courts in some states, like California, had held class arbitration waivers unenforceable, courts in other states had upheld such provisions. Â (One classification of court decisions on the issue is available here.) Â Although the petitioners and respondents in Concepcion disagreed about the precise status of the decisions in various states, they agreed that there were a diversity of approaches.

I am well aware that Concepcion itself (indeed, the whole line of Supreme Court FAA preemption decisions, beginning with Southland Corp. v. Keating) is subject to such criticisms on federalism grounds.Â  Concepcion precludes states from making class arbitration waivers unenforceable, while Southland precludes states from making consumer and employment arbitration agreements unenforceable.Â  My point here is simply that such criticisms do not justify enacting the Arbitration Fairness Act, which is no more federalism friendly than Southland.Â  If one wants to overrule Southland, the way to do so is to make the FAA inapplicable in state court (or, more generally, to permit states to regulate consumer arbitration clauses), not to adopt the opposite, but equally uniform, federal rule.Â  But none of the bills introduced in Congress in recent years seeks to do that, just like none of the responses to Concepcion seeks only to reverse that decision.