During an argument in Moore v. Harper that lasted nearly three hours, the justices probed the authority of state courts to supervise state legislatures’ decisions about how to run federal elections. 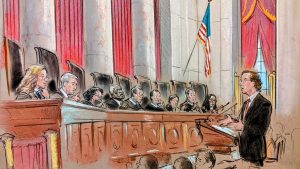 A regular round-up of “relisted” petitions. This week: A First Amendment challenge to a federal immigration law and a dispute over consecutive criminal sentencing.

In Bartenwerfer v. Buckley, the court scrutinized purportedly “careless” drafting of the Bankruptcy Code — but seemed destined to land on a plain-text reading of a key provision.

In 303 Creative LLC v. Elenis, the court appeared ready to rule that a Colorado designer is entitled to exemption from a state law prohibiting discrimination on the basis of sexual orientation.

UCLA election law professor Richard Hasen joins Amy to explain Moore v. Harper, the case in which North Carolina legislators ask the justices to consider a theory that would give state legislatures near complete power to regulate federal elections without interference from state courts.

The morning read for Thursday, Dec. 8

The morning read for Wednesday, Dec. 7

The Supreme Court on Monday announced changes to its rules, which govern litigation before the court and its operations. Although the changes were largely technical, the new rules, which go into effect on Jan. 1, 2023, do contain some significant substantive changes – most notably, the elimination of the consent requirement for amicus briefs.

Under the court’s existing practice, anyone who wants to file an amicus brief in a case before the court must obtain consent from the litigants on both sides of the dispute. If consent is not granted, the would-be amicus must seek the court’s permission to file. Unlike many other federal courts, the Supreme Court – with rare exceptions – normally grants such requests; perhaps as a result, litigants overwhelmingly provide consent.

The Supreme Court heard a confusing and wide-ranging discourse yesterday in MOAC Mall Holdings LLC v. Transform Holdco LLC. For the generalist Supreme Court follower, the case is a technical one, involving the authority of a court of appeals to review a bankruptcy order authorizing a bankrupt tenant to sell its interest in a lease. To give a sense of the context, the parties to the case are the landlord at Mall of America, the largest retail shopping center in North America, and Transform Holdco, a shell entity created to purchase most of the operating assets held by Sears before it filed for bankruptcy in 2019.

The purchaser argues that it successfully has acquired the space Sears formerly occupied in the Mall of America. The court granted review of the lower court’s ruling that it had no authority to review that order, but the argument wandered through several different reasons that the purchaser has interposed to persuade the court not to decide the question on which it granted review. Although the justices commented repeatedly that they found the case and the argument confusing, it is easy to summarize the argument from the perspective of a disinterested observer. Substantially all of the discussion involved one of two threads.