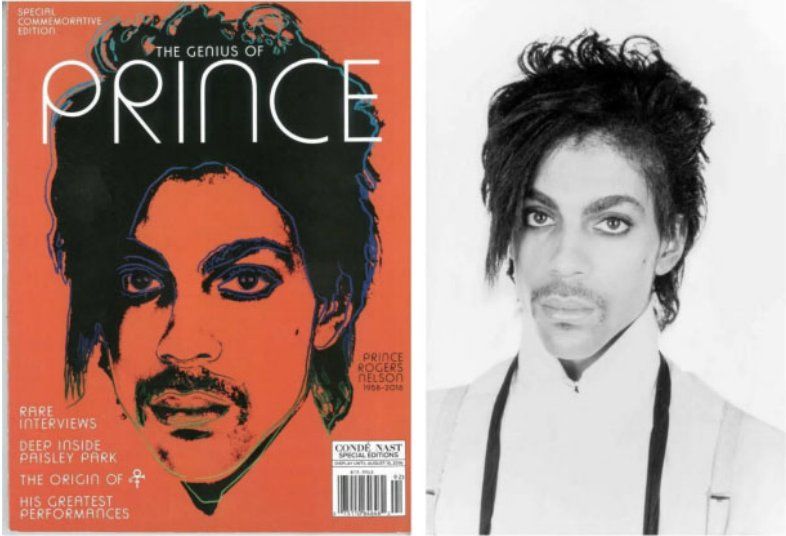 In Andy Warhol Foundation for the Visual Arts v. Goldsmith, the justices get another chance to offer their take on the “fair use” doctrine in copyright law. The case involves a set of images Andy Warhol based on a 1981 photograph of Prince by the award-winning photographer Lynn Goldsmith, herself famous for iconic photographs of musicians like Roger Daltrey and Bruce Springsteen. All agree that Warhol used the Goldsmith image as a basis for his images; Vanity Fair sent the image to Warhol and asked him to use it as a reference for an illustration of Prince. Indeed, the magazine paid Goldsmith a $400 license fee and credited her photograph as the source for Warhol’s illustration (“Purple Prince”).

The problem arose more than 30 years later, shortly after Prince’s death in 2016 (and long after Warhol’s death). At that point, Condé Nast, the parent company of Vanity Fair, published a different one of Warhol’s images from his Prince series, silkscreened in orange rather than purple (“Orange Prince”). The Andy Warhol Foundation charged Condé Nast a $10,250 licensing fee to publish the image. The question for the justices is whether that second use – for which the magazine did not pay Goldsmith – infringes Goldsmith’s copyright in the photograph on which Warhol based all the images.

To sketch a lot of statutory content in a few words, the federal Copyright Act grants a variety of exclusive rights to the “authors” of “works of authorship.” Among other things, that includes the exclusive right to reproduce the work, to display the work publicly, and to prepare “derivative” works “based upon” the work. Those exclusive rights, though, are subject to an exception when someone else’s unauthorized use is “fair.” So, if Warhol’s activity is a “fair use” of Goldsmith’s photograph, then the Andy Warhol Foundation (which owns the copyrights in Warhol’s work) is free to license those images without Goldsmith’s permission and without paying her.

This is far from the Supreme Court’s first case on the subject; a major decision last year applied the fair-use doctrine to approve Google’s use of Java code in its Android operating decision. The decision most relevant here involved a hip-hop group (2 Live Crew) that recorded a parody of Roy Orbison’s song “Pretty Woman”; 2 Live Crew offered to license the song from Orbison’s estate, which refused (apparently offended by the nature of the parody). The Supreme Court held that the parody was a fair use. The opinion pointed out that you hardly can make a parody of something without copying enough of it for the parody to be recognizable, and also that you can’t expect parodists to succeed if they have to get permission from those they criticize.

The court of appeals in this case held that Warhol’s work was not a fair use. It acknowledged that Warhol had added a “new aesthetic” and “new expression,” but concluded that Warhol’s activity was not enough to make the images a fair use. Among other things, it pointedly criticized the trial court’s decision for relying on an “inherently subjective” assessment of the substance of Warhol’s work. The court of appeals also emphasized how frequently derivative works “transform” the message of the original work without being regarded as fair and thus exempt from paying any license fee. Given the celebrities involved in the dispute, few were surprised when the Supreme Court agreed to review the matter. At the court, as you would expect, the matter has garnered considerable attention, with dozens of amicus filings by industry groups and academics on both sides of the matter. 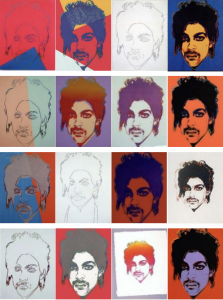 For its part, the foundation emphasizes the high status of Warhol’s work in the modern art community and provides a careful delineation of the expressive choices reflected in the process Warhol followed in producing the 16 images in his Prince series. In the “a picture is worth a thousand words” tradition, the brief includes a full-color reproduction of all 16 of the images. The reproduction displays two things about the images. On the one hand, all of the images involved a direct copying of the shape and delineation of Prince’s face from Goldsmith’s photograph. Conversely, the images – applying varied color choices – changed the color and tone of the photograph into what the foundation’s brief accurately describes as “a flat, impersonal, disembodied, mask-like appearance.” Quoting the Supreme Court’s opinion in the 2 Live Crew decision, the foundation argues that the changes by Warhol were “transformative,” because they “added something new,” which included a new “meaning” or “message.” Largely because the use was “transformative,” Warhol argues that it is fair.

Goldsmith argues that Warhol’s new expression was insufficient to make the work “transformative.” She draws a dichotomy between cases that copy original works out of necessity (like the parody by 2 Live Crew) and those that instead supersede the original work. Warhol easily could have produced flat and impersonal images of Prince that didn’t start from Goldsmith’s photographs – he could have taken his own photographs or licensed any other photographs he found. Moreover, Goldsmith points out, the use to which the foundation put Warhol’s image in the commercial marketplace – magazines publishing stories on the death of Prince – is a direct displacement of Goldsmith’s photograph. It well might be different, for example, if the series of images were displayed in a museum of modern art; they frequently have been displayed in museums and Goldsmith has not challenged that activity.

Given the predilections of the current justices, Goldsmith is on her strongest ground when she resorts to the specifics of the statute. For one thing, she points out that the statutory definition of fair use calls for examination of four factors. Goldsmith argues that the foundation’s focus on whether use is or is not transformative ignores the other three factors in the test that the statute prescribes (nature of the copyrighted work; amount and substantiality of the copying; effect of the use on the market for the original work). In the same vein, Goldsmith (and several of her amici, including the United States) emphasizes that a broad ruling that any new “message” or “aesthetic” is enough to make repackaging a fair use is hard to reconcile with the statute’s grant of an exclusive right to make derivative works. The authors of books, for example, commonly insist on hefty license fees before agreeing to permit the use of their books in movies, even though those movies almost inevitably add substantial new material altering the course of the plot as originally conceived. (Think, for example, of the new and shifting characters in the highly acclaimed Lord of the Rings trilogy. Should the many changes from the books mean that Tolkien’s estate was not entitled to a license fee for production of those highly profitable movies?)

We can expect the justices to be heavily engaged in this one. So I think we’ll have a much better idea what they think by the end of the argument on Wednesday.