Jackson’s nomination hearings will begin March 21. Here’s what to expect. 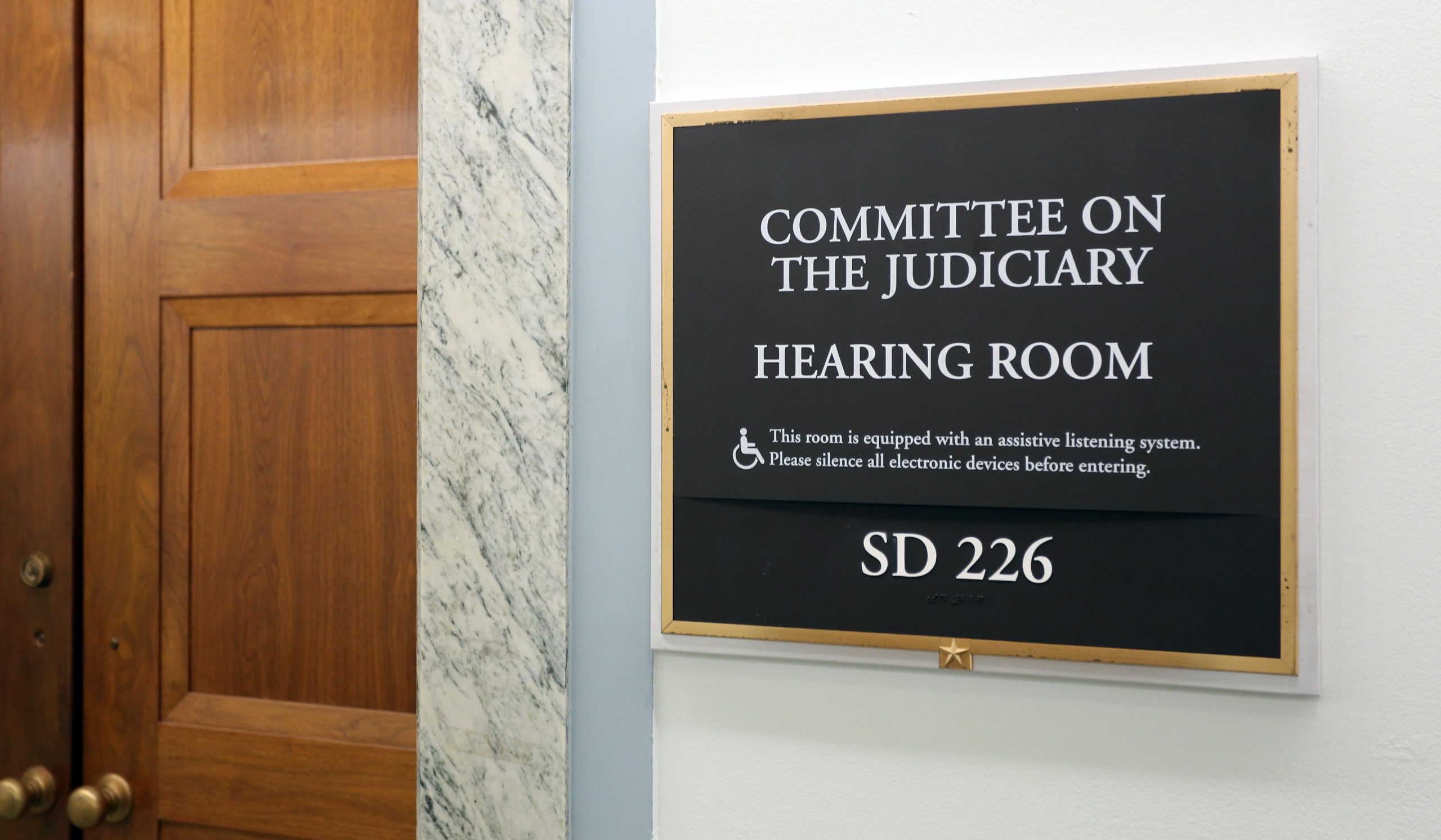 The Senate Judiciary Committee will soon take up the nomination of Ketanji Brown Jackson. (Katherine Welles via Shutterstock)
Share

Amy Coney Barrett navigated a truncated confirmation timeline with a COVID-19 outbreak in a GOP caucus that held a slim majority in the Senate. Brett Kavanaugh was hauled before the Senate Judiciary Committee a second time to address an allegation of sexual assault in high school. Sonia Sotomayor had to glad-hand senators with a broken ankle. Every Supreme Court confirmation has its own complications. And while most observers at this stage expect Ketanji Brown Jackson to be confirmed relatively smoothly to succeed Justice Stephen Breyer, the White House and Senate Democrats are taking no chances.

Jackson began meeting with senators from both parties on Wednesday, and Sen. Dick Durbin, D-Ill., the chair of the Senate Judiciary Committee, scheduled March 21 as the start of four days of nomination hearings, with the goal of Senate confirmation by early April. That swift schedule is quicker than most Supreme Court nominations in recent decades, though not as hurried as the Barrett timeline.

The most obvious challenge for Jackson and the White House is the razor-thin margin by which Democrats control the Senate. The chamber is divided 50-50, with Vice President Kamala Harris able to cast tie-breaking votes. So Jackson could be confirmed solely with Democratic votes – assuming everyone remains healthy and able to vote. (Sen. Ben Ray Lujan, D-N.M., who is recovering from a stroke he suffered in January, expects to return to the Senate in time to vote on Jackson’s nomination.)

But even with that support, Republicans can still complicate the confirmation. Perhaps President Joe Biden hoped to minimize procedural obstruction when he selected Jackson, who garnered three GOP votes when she was confirmed last year to the United States Court of Appeals for the District of Columbia Circuit.

The Constitution dictates in broad terms how the country gets a new Supreme Court justice, but the details of what that process actually looks like is up to the Senate. Under Article II, Section 2, clause 2, known as the appointments clause, the president “shall nominate, and by and with the Advice and Consent of the Senate, shall appoint … Judges of the supreme Court.” The Senate makes up its own rules for what “Advice and Consent” means in practice.

Under the current rules, the Senate Judiciary Committee first considers and investigates the president’s nominee before deciding whether to refer the nominee to the full Senate for a vote. Unlike during previous Supreme Court confirmations, the Judiciary Committee is evenly split with 11 members from each party.

Here are the answers to some procedural questions about Jackson’s nomination as it makes its way through the Senate.

What happens if the committee splits on whether to advance the nomination?

When the parties are not evenly divided, a split committee vote would typically doom a nominee, but that’s not necessarily a problem in the current Senate. Now if the committee deadlocks, the Democrats can force a vote of the full Senate to bypass the committee’s deadlock.

That’s because of Senate Resolution 27, an organizing resolution passed in February 2021 that dictates the procedure for a tie vote in committee. Section 3 of the resolution calls for the committee chair to transmit notice of a tie vote to the secretary of the Senate. Then the majority leader can file a discharge petition to get the nominee on the executive calendar. The petition triggers four hours of debate, evenly divided between the parties. A simple majority vote in the full Senate (with Harris, as usual, standing as a potential tiebreaker) can place the nominee on the executive calendar.

Once the nominee is placed on the executive calendar, the Senate proceeds as it would have had the nominee been voted out of committee.

Can Republicans deny a quorum to conduct committee business?

Judiciary Committee rules require at least two members of the minority party to be present to “transact business,” including voting on a nominee. Senate rules do not have a minority presence requirement, but they do require that a majority of the committee be physically present to vote out a measure or matter — including a nomination. Under the Senate rules, therefore, Democrats need at least one Republican present to constitute a majority of the committee. While voting on a nomination with only one Republican present would violate committee rules, it would be consistent with Senate rules, so it is unlikely the parliamentarian would uphold a point of order on the matter.

But what if all Republicans on the committee chose to boycott the hearings? Technically, that would deny Democrats a quorum and the ability to advance a nomination. But there is no indication that Republicans will unleash that particular arrow from their procedural quiver. The committee’s ranking Republican, Sen. Chuck Grassley of Iowa, has committed to “show up” at the hearings “and do the job that Iowans pay me to do.”

And even if Republicans did deny a quorum, it’s unlikely that such a tactic would be enough to prevent a confirmation. Committee rules aren’t self-enforcing, and the committee chair can simply ignore them. Indeed, when Republicans held the Senate majority in 2020, the Democrats denied a quorum in committee to advance Barrett’s nomination. The committee chair, Sen. Lindsey Graham of South Carolina, bypassed the quorum requirement and gaveled Barrett forward to the full Senate anyway. If necessary, Democrats could try a similar strong-arm tactic, though it might risk alienating independent-minded caucus members Sens. Joe Manchin of West Virginia and Kyrsten Sinema of Arizona.

What happens if the Senate splits on the confirmation vote?

Confirmation requires a simple majority. Jackson could clinch confirmation with only 50 votes if one or more senators abstain or vote “present” (as Sen. Lisa Murkowski, R-Alaska, did in 2018 when Kavanaugh was confirmed 50-48).

If Jackson is confirmed quickly, will she take the bench immediately?

No. In Breyer’s letter to Biden announcing his retirement, he said the retirement will “take effect when the Court rises for the summer recess this year (typically late June or early July) assuming that by then my successor has been nominated and confirmed.” So even if Jackson were confirmed in April, there wouldn’t yet be an open seat for her to fill. And in any event, two additional steps must occur before she could take office: the president must sign a formal document, known as a commission, appointing her to the court, and she must take the two oaths required of Supreme Court justices. Jackson and the White House would simply wait until the court’s summer recess to complete those steps.

There is precedent for confirming judges to seats that will remain occupied for a short time after the confirmation. In spring 2020, for instance, Judge Thomas Griffith of the D.C. Circuit announced he would retire in September of that year. The Senate confirmed Justin Walker to replace him in June, and then Walker waited more than two months before he received his commission on Sept. 2, 2020, the day after Griffith vacated the seat.