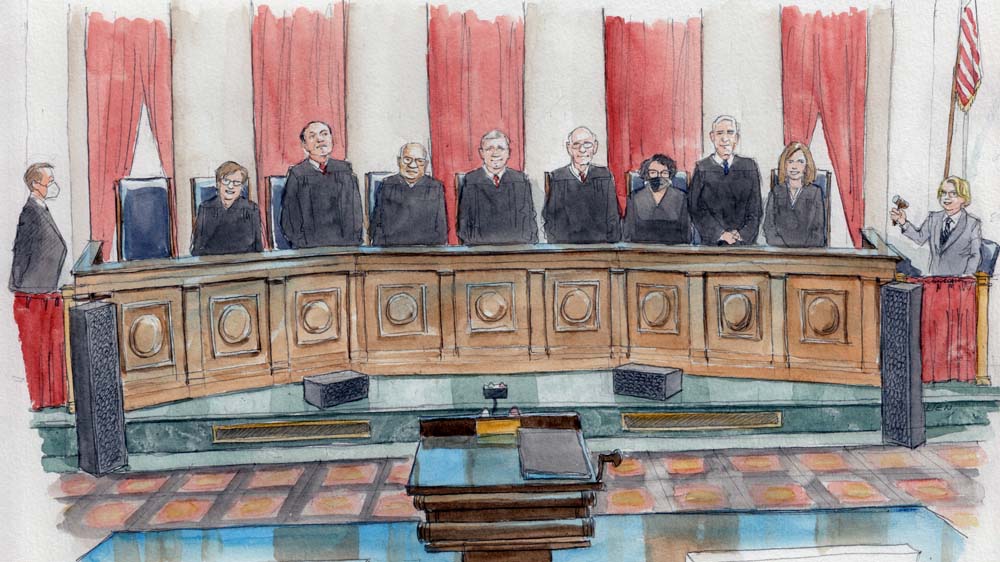 The new October 2021 term is gavelled in, minus Justice Kavanaugh who tested positive for COVID-19 last week. (Art Lien)
Share

When the justices of the Supreme Court returned to the courtroom on Monday for the first time since March of 2020, the atmosphere was simultaneously familiar and yet very different. The justices heard oral arguments in a pair of cases that epitomize the bread and butter of the court’s docket: a long-running water-rights dispute and a case involving the interpretation of the Armed Career Criminal Act. But reminders of the pandemic were ubiquitous. The courtroom was sparsely populated, Justice Sonia Sotomayor wore a black mask (although her colleagues went unmasked), and Justice Brett Kavanaugh dialed in by phone after testing positive for COVID-19 late last week.

The court announced on Friday morning that the 56-year-old Kavanaugh, who has been fully vaccinated against COVID-19 since January, tested positive but was experiencing no symptoms. Later in the day, the court indicated that the other eight justices, as well as retired Justice Anthony Kennedy (who attended Monday’s arguments) had all tested negative. Kavanaugh participated in Monday’s arguments remotely.

Because of the pandemic, the court building remains closed to the public, and attendance at oral arguments is limited to the justices and their law clerks, the lawyers involved in a case, members of the press, and a handful of court guests. On Monday, those guests included Kennedy and some of the justices’ spouses.

Once the oral arguments began, everything seemed to have almost returned to normal. Lawyers removed their masks to argue, and the audience heard the regular exchanges between the arguing counsel and the justices. Roughly 25 minutes into the first argument, Kavanaugh tried to ask a question – which, as anyone who has ever joined an in-person meeting by phone can attest, is not always easy. But on his second try, Kavanaugh was able to ask his question, with his voice projecting out into the courtroom.

One other change from pre-pandemic practices came from Justice Clarence Thomas. Before the justices switched to telephone arguments in May 2020, Thomas rarely asked questions, explaining that (among other things) lawyers should be able to make their case without being interrupted. When the justices adopted a new format for telephone arguments that involved each justice taking turns to ask questions, Thomas was an active participant. Thomas signaled on Monday that he might remain an active questioner now that the justices have returned to the courtroom, asking several questions throughout the morning.

The justices return to the bench at 10 a.m. on Tuesday.