Lessons from the pandemic: Gains, losses and two suggestions for a new normal 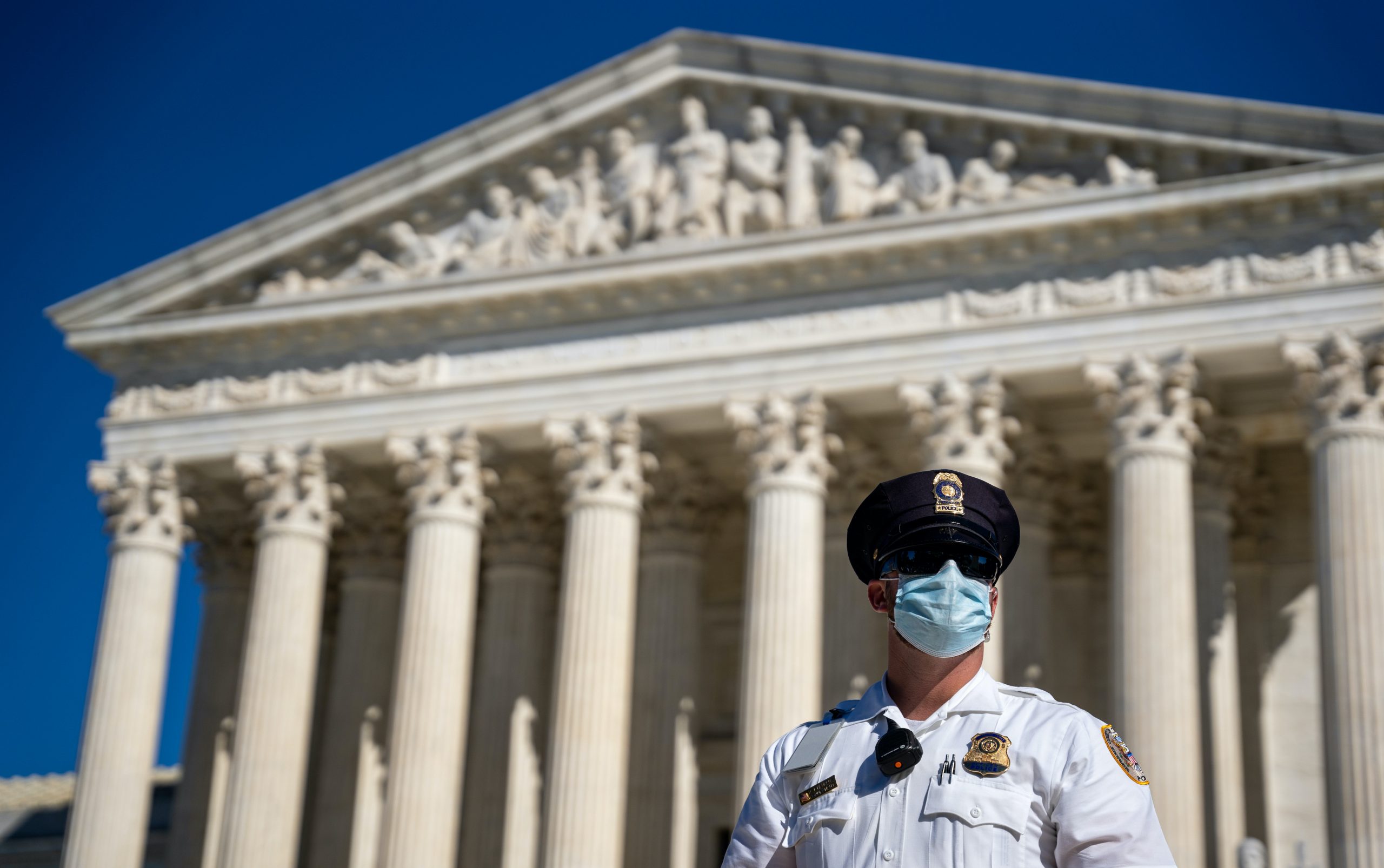 A police officer stands outside the Supreme Court in October 2020. (Julian Leshay via Shutterstock)
Share

Lyle Denniston began covering the Supreme Court in 1958, and he has been writing about the court ever since (including as SCOTUSblog’s reporter from 2004 to 2016). He now writes about the court and the law for his blog, lyldenlawnews.com.

Like all America, and literally all of the world, the Supreme Court must now ask itself how it wants to shape a “new normal” in the wake of the COVID-19 pandemic. For those who have followed the court closely from the outside, since March 2020, there is both hope and deep uncertainty about what might now pass for normal.

A few observations, shaping one’s expectations, can be summed up in these contradictions:

First: The court took a significant step toward transparency (live audio of oral argument) even though the format of the hearings themselves was deeply flawed. Justice Clarence Thomas’s emergence as an active questioner, though long in coming, was refreshing, but it did not make up for the absence of genuinely meaningful exchanges among the justices.

Second: The court struggled valiantly, and with hardly a hitch, to keep up with opinion-writing, even while closeting some of its substantive work on the “shadow docket,” in William Baude’s apt phrase. The quality of the final decisions in argued cases (whatever one thinks of substantive outcomes) remained high, even as the court continued to do less than it is capable of doing, and maybe much less than it ought to do.

At least some of the positives and the negatives were predictable responses to the exigencies of the public health crisis. The question now arising is whether the court will simply return to business-as-usual now that the CDC and other public health authorities have relaxed, somewhat, the COVID restrictions. (Everything may change, of course, if the spread of the new delta variant and vaccine resistance combine in a new surge of illness and death.)

From the outside, we have to assume that the justices are using some of their summer recess to think through the lessons that they are prepared to draw from the pandemic experience. At a minimum, one may hope that the building will soon be reopened to the public and the press with appropriate measures for public health, that a safe way can be found to conduct open oral argument sessions with the justices, the counsel and the audience attending in person, and that opinions will once again be announced from the bench.

For an institution that makes change slowly, perhaps only those obvious measures will be deemed sufficient. It probably is too much to expect the court to begin allowing televised coverage of oral arguments (desirable but perhaps too radical for the present nine), or to significantly expand either argument time or the number of cert grants (both highly desirable but perhaps requiring too much additional work).

What is most needed, from this observer’s perspective, are two things: (1) Abandon entirely any repeat, under any future conditions, of the style of oral argument followed during the crisis; and (2) make far less use of the “shadow docket,” at least in the fashion followed recently.

1. The flaws in “round-robin” oral argument

One must begin with an appreciation of the basic and practical role of oral argument. It is not for counsel to make their case; that is necessary but secondary. Rather, it is for the justices, through their questions and comments, to frame the issues to be explored in the follow-up, conference deliberations. That requires a genuine exchange of thoughts and perceptions (something not at all achieved at the cert-granting stage).

With each justice given an allotted time, enforced by Chief Justice John Roberts, the argument becomes a parade of turns-taking, only occasionally and awkwardly interrelated. This necessarily prolongs the argument (mostly to the benefit of counsel, not the court). It unduly enhances the chief justice’s role, not always exercised with finesse. It tests the patience of most of the justices at least now and then. It fractures comments, diluting the opportunity for genuine conversation and collegiality. Overall, it leaves the listening public with a stilted impression of what judging by a multi-judge court is supposed to be.

2. The abuse of the “shadow docket”

The use of what is essentially motions practice – taking temporary steps through summary orders that do not involve significant briefing or oral argument – to make the near-equivalent of substantive law was not entirely new with the pandemic. But its abuse was clearly more evident during the crisis, and especially in three areas of the court’s recent work: monitoring COVID regulations, reacting to perceived threats to religious worship, and responding to manufactured disputes over presidential ballot counting.

It has seemed that the court was impatient to write more broadly, to settle more than was necessary, than is customary in this area of supposedly limited contemplation and consideration. Much of it also had the flavor of hasty judgment, maybe agenda-driven in these particularly sensitive areas. Perhaps that was the result of working remotely; direct personal exchanges might have had a moderating effect.

In practical effect, this part of the docket appears to be used instead of granting more certs and issuing stays only to maintain the status quo pending review.

With the court now under new scrutiny, especially by President Joe Biden’s commission on court reform, the justices could benefit from serious reflection on their own need for reform from within.