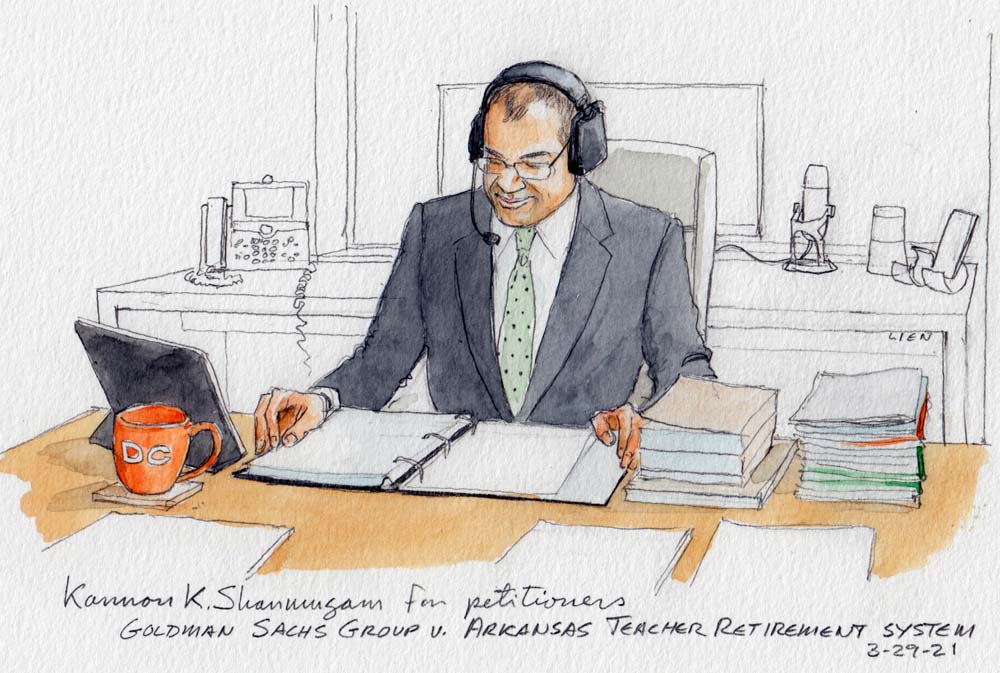 Monday’s argument in Goldman Sachs Group v. Arkansas Teacher Retirement System did not provide much to clarify what – if anything – the justices will decide in this messy and seemingly interminable piece of securities litigation.

As I explain in more detail in my preview, the case presents a pair of technical questions about evidentiary standards and burdens of proof in securities class actions. The central procedural problem is deciding when class-based adjudication is appropriate in securities-fraud litigation. Generally, class-based adjudication is appropriate only if common issues “predominate,” and we know from the Supreme Court’s 1988 decision in Basic Inc. v. Levinson that courts will presume they “predominate” if the case challenges misrepresentations made about stocks trading in a public and well-functioning market. Crucially, Basic also tells us that defendants can rebut that presumption if they can show that the misrepresentation “did not lead to a distortion in price.” Defendants care so much about the problem because once a class action has been certified it is almost inevitable that they will be forced to settle.

Goldman Sachs asks the court to explain exactly what a defendant can do to rebut that presumption. A group of shareholders, led by the Arkansas Teacher Retirement System, allege that Goldman Sachs made a series of false statements that artificially propped up stock prices. Goldman Sachs argues that the statements were so bland (“generic”) that they could not have influenced the price of the stocks in any cognizable way. “Our clients’ interests always come first.” “Integrity and honesty are at the heart of our business.” “We have extensive procedures and controls that are designed to identify and address conflicts of interest.” Etc. The first question for the court is the extent to which the genericity of those statements helps Goldman Sachs to establish that the statements did not affect stock prices. The second question is which party bears the ultimate burden of persuasion if Goldman Sachs’ evidence is enough to rebut the Basic presumption.

It is difficult to provide a succinct assessment of the meandering and scattered argument the justices heard on Tuesday. With apologies for what will seem unduly prolix, the most that I can say is that three general themes dominated the discussion, the first and most substantive of which involved the link between the materiality of the statements and the likelihood that they affected price. On the one hand, we know from an earlier decision (Amgen v. Connecticut Retirement Plans) that the plaintiff need not prove materiality at the class-certification stage. On the other hand, evidence that investors would not regard generic statements as material strongly suggests that the statements would not affect the price. Passages in the opinion of the lower court in this case suggest that because plaintiffs need not prove materiality at this stage, defendants are not entitled to prevail by disproving materiality, even if it is by introducing evidence designed to show that the statements did not affect the stock price. Several justices expressed strong disapproval of that idea.

Justice Clarence Thomas, for example, acknowledged that “Amgen … holds that the plaintiff is not required to prove materiality at the class-certification stage” but questioned whether that rule should “preclude the defendant from disproving materiality.” Justice Amy Coney Barrett followed the same line of reasoning, commenting that “if a statement is immaterial, it’s far less likely that it will actually have an impact on the price, right?” Justice Samuel Alito was even more pointed. When Tom Goldstein (representing the plaintiffs who had invested in Goldman Sachs securities) cautioned against allowing discussion of materiality to dominate the class-certification stage, Alito immediately asked whether he was arguing that “in considering whether the Basic presumption has been rebutted, you may not consider any evidence that would also go to the issue of materiality.” When Goldstein admitted that would go too far, Alito asked whether Goldstein would accept the view offered by Thomas and Barrett: “Should we say the opposite of that? That there is no reason to disregard evidence that would rebut the Basic presumption just because it would also go to the issue of materiality?”

Justice Brett Kavanaugh spent much of his time testing particular phrasings of an answer to that problem. For example, in an interchange with Kannon Shanmugam (representing Goldman Sachs), Kavanaugh seemed to agree with Shanmugam that “the generic nature of the alleged misstatement is powerful evidence of the lack of price impact. You also use ‘critical’ or ‘important.’ What’s your preferred adjective?” His later questions suggested that he settled on the adjective “important,” as he asked both Sopan Joshi (representing the federal government) and Goldstein whether they would agree that “the generic nature of an alleged misstatement is important evidence of a lack of price impact.” His more expansive comments suggests that he, like Alito, Thomas, and Barrett, thinks the answer is clear:

I think we’re here in part because of confusion in some of the lower courts about how to read Amgen and [a 2014 decision in Halliburton v. Erica P. John Fund] together. On the one hand, don’t consider materiality. On the other hand, don’t consider evidence of lack of price impact. And the problem, as you know, is that the two inquiries overlap very significantly. Can we say that the fact that the evidence on lack of price impact from generic statements overlaps with materiality does not matter?

A second theme was frustration at the narrow and shifting basis of disagreement between the parties, which in the mind of some justices suggests that the case is hardly worth deciding. The problem is that both sides have narrowed their positions substantially in the course of litigation. Goldman Sachs originally argued that generic statements were categorically incapable of having any price impact, but now argues only that their genericity is evidence that supports the lack of price impact. Conversely, the plaintiffs argued below that the genericity of the statements is wholly irrelevant. Now the plaintiffs agree that genericity is relevant, but argue that defendants can rely only on expert testimony, rather than evidence or inferences from the statements themselves. For Barrett, among others, the difference between the two parties seemed “pretty narrow.” “So the only dispute between you is whether the judge can rely on common sense or expert testimony only,” she said. “Am I correct about that?” Similarly, Chief Justice John Roberts asked whether there is “any daylight on the substantive question between the two of you concerning the generic statements.” Justice Stephen Breyer suggested that at this point of the litigation “everybody agrees” that the correct answer to the first question is that courts should “take the statement for what it’s worth. Listen to the experts, and don’t check your common sense at the door. That’s what judges do. So why are we hearing that issue?”

Justices Sonia Sotomayor and Elena Kagan seemed unpersuaded that the U.S. Court of Appeals for the 2nd Circuit had even taken the extreme position that Goldman Sachs attributes to it (that genericity is wholly irrelevant). Sotomayor, for example, pointed out to Shanmugam that he had “argued below that generic statements cannot have price impact as a matter of law.” For her, “read in context,” the 2nd Circuit’s two statements that Goldman Sachs challenges were merely responding to Goldman Sachs’ prior position in the litigation.  Sotomayor repeatedly emphasized statements from an earlier 2nd Circuit opinion that, in her view, stated the correct rule more clearly than the opinion under review this week: “Wouldn’t the most efficient answer be to state the law, and the best way to read the 2nd Circuit’s opinion is the way it said the first time and just let this issue … end and go on with the case?” As Kagan put the same point, “It’s hard to find in the second opinion the correct statement of the law. You have to go back to the first opinion to find the correct statement of the law. So why shouldn’t we just vacate and say, ‘Here’s what the law really is; we want you to make sure to do it under that appropriate standard’?”

A third theme is concern about the “inflation-maintenance” theory of securities fraud on which this case (and many others) rests. Under that theory, plaintiffs need not show that the allegedly false statements caused the price to rise; they need only show that some adverse event caused the price to fall and point to earlier false statements that, they argue, helped the securities to maintain an inflated price. Roberts and Thomas were deeply skeptical of that theory. Thomas, for example, was dubious that “the Basic presumption [should] even apply if the cause of the alleged inflated price has never been identified.” Both of them also pressed Joshi how he could defend the idea that a generic statement like “we are a nice company” could be treated as a “fraudulent statement.”

The different justices went off on so many tangents during the argument (many of them not even mentioned in this already lengthy article), so it is not at all obvious what line of analysis the court eventually will adopt. A decision is expected by summer.

[Disclosure: Goldstein & Russell, P.C., whose attorneys contribute to SCOTUSblog in various capacities, is counsel for the Arkansas Teacher Retirement System in this case. The author of this article is not affiliated with the firm.]