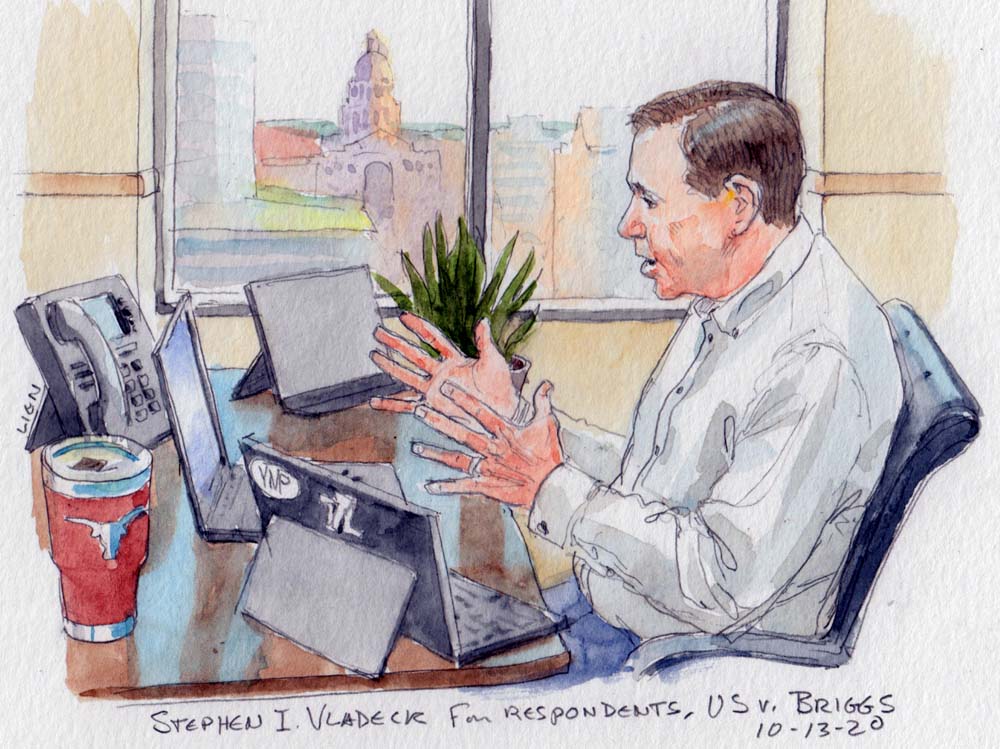 Stephen Vladeck phones in to the argument, with the Texas Capitol in view (Art Lien)
Share

During Tuesday’s telephonic oral argument in United States v. Briggs, counsel for both sides urged the justices to avoid deciding whether the Eighth Amendment ruling in Coker v. Georgia, prohibiting capital punishment for nonhomicide rape, applies to the military. But it isn’t clear whether five justices can agree on the statutory argument of one side or the other, suggesting that it is still possible the court will reach the constitutional issue. 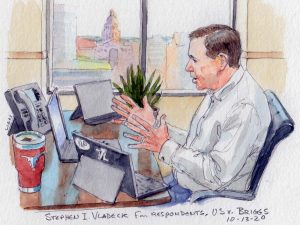 Stephen Vladeck phones in to the argument, with the Texas Capitol in view (Art Lien)

This litigation is the consolidation of three cases involving male military personnel convicted of raping female military personnel, in separate incidents. Michael Briggs, Richard Collins and Humphrey Daniels claim that the statute of limitations should have barred their prosecutions. The government argues that there is no statute of limitations for military rape because Congress exempted any military “offense punishable by death” from any limitations period. The three men counter that the “cruel and unusual punishment” clause of Article 55 of the Uniform Code of Military Justice, like its Eighth Amendment counterpart, generally prohibits the death penalty for rapes not involving fatalities. That, in turn, means there is a statute of limitations for military rape, and it expired before any of the three men were prosecuted. The U.S. Court of Appeals for the Armed Forces agreed with Briggs, Collins and Daniels.

Acting Solicitor General Jeffrey Wall urged the justices to interpret Article 43 of the UCMJ, which states that any “offense punishable by death” has no statute of limitations, as meaning punishable by death under some other provision of the UCMJ – but not under the Eighth Amendment. In particular, Article 120 of the UCMJ authorizes the death penalty for rape. But this argument met with some skepticism.

“Suppose Congress passed a law tomorrow … in some entirely different part of the federal code, and it just said rape shall not be punished by death under any federal law,” Kagan said. “Would that change the outcome?”

“Potentially, it might,” Wall conceded. “If Congress itself put in a provision saying military rape could not be punished by death, then you would have a straight-up conflict between that provision and Article 120.”

Later, Justice Brett Kavanaugh gave Wall a second chance to answer Kagan’s question. If Congress passed a law outside the UCMJ outlawing the death penalty for all federal crimes, including in the military, Kavanaugh asked, would you still say this offense is punishable by death under Article 43?

“I think I would,” Wall responded. “It would be a harder case. … But I do think that putting it outside the code could potentially make a difference. If they put it inside the code, then I think it could unsettle our statutory argument.” Wall obviously continued to think about this point throughout the hearing, as he raised it again in rebuttal: “And so to revise my answer to Justice Kagan somewhat, I think Congress would need to make a contrary judgment in the UCMJ to affect the meaning of Article 43.”

“I am curious that it doesn’t say ‘punishable by death under this chapter,'” Kavanaugh said, echoing Kagan’s observation. “And so that raises an ordinary meaning question.” But he did not push Wall further on the point.

Kavanaugh did push Stephen Vladeck, counsel for Briggs, Collins and Daniels, to reconcile Vladeck’s reliance on Article 55 with the existence of Article 120. How do you get around the fact, he asked Vladeck, that Article 120 authorized the death penalty? Articles 55 and 120 were perfectly consistent when first enacted in 1950, Vladeck replied. Then, in 1953, the Court of Military Appeals expressly held that Article 55 provides service members as much protection against cruel and unusual punishments as the Eighth Amendment, and Congress has never disavowed it, even after Coker, Vladeck continued.

Yet the plausibility of Vladeck’s statutory argument wasn’t the justices’ only concern. Kagan questioned whether it was really only a statutory argument. “Isn’t the canon of constitutional avoidance against you?” she asked. “Isn’t this case an example of whether we have to decide whether Coker and Kennedy [v. Louisiana] apply to the military to decide a pretty routine criminal case?”

“I don’t think so, Justice Kagan, because I think Congress has already decided that,” Vladeck answered. The military courts have uniformly interpreted Article 55 to automatically apply Coker to service members, he said.

Justice Neil Gorsuch inquired along the same lines. Let’s say that whether Coker applies to the military is an open question, he said. What then? “Then I think this court would have to decide the matter as a question of first impression,” Vladeck responded, “because these are criminal defendants on a direct appeal who are entitled to make any claim based on existing law that’s available to them. But again, Justice Gorsuch, I don’t think this court has to reach this question. I think Congress has done it for us.”

Justice Clarence Thomas tried out an interesting statutory interpretation hypothetical on both sides: Is an offense punishable by the death penalty in the military if the executive branch has conclusively decided never to pursue capital punishment for that offense? “Let’s say there is a uniform policy both at the Pentagon and in the White House for many years not to call for the death penalty in the case of rape. Would that policy somehow trump the language in the statute?” Thomas asked.

Wall predictably resisted the notion that such a policy would render the offense not punishable by death. Yet Vladeck also refused Thomas’ invitation. “Not in our view,” responded Vladeck, “because the natural, plain reading of the statute is whether the offense is punishable by death, not whether individual cases are subject to the death penalty.”

Thomas offered one more time. “I’m talking about a universal policy across the administration and in the military that they would never ask for it,” he stipulated. “Let’s say it’s written, it’s whatever formal procedures they use, but it’s still on the books.”

“I take the point, Justice Thomas,” Vladeck said. But “even if the president were to promulgate such a rule, a future president could revoke it.”

If neither side’s statutory interpretation arguments manage to corral a majority, the court might have to reach the question of whether Coker applies in the military context. More than one justice expressed interest in the issue.

“Why isn’t life without possibility of parole sufficient” in the military context, Justice Sonia Sotomayor asked Wall. “Rape divides up platoons and units” in a way that other crimes don’t, he responded. And life without parole would not be sufficient for some rapes, such as the 1961 Austria case, he said.

“Do you think there’s any Eighth Amendment limit on Congress’ power to make offenses in the military punishable by death?” Kavanaugh asked Wall. “I think you could make arguments that the Eighth Amendment doesn’t apply at all,” Wall answered. “And if it applies, it may only apply to barbarous and torturous punishments. But we haven’t tried to make those arguments because, frankly, we don’t need them to prevail. All we need is the court to say that, even if the proportionality analysis of Coker and Kennedy applies, the balance is different,” Wall said.

“Don’t we have to say a little more than that?” Kavanaugh pressed. “The balance is different and the test in the military is less restrictive?” Wall agreed that the court needed to defer to the government on military matters, including military justice.

Vladeck faced skeptical queries on the constitutional issue as well. “None of the analysis in Coker applies at least directly to the military context,” stated Chief Justice John Roberts. “So why should that judgment about the civilian context,” Roberts asked, apply not only to the military, but to the statute of limitations for rape in the military? Rather than respond on the constitutional level, Vladeck told Roberts that Congress had already resolved the question in Article 55.

Justice Samuel Alito tested Vladeck with perhaps the ugliest of scenarios — mass rape by soldiers in occupied territory. “That’s hard to imagine … a member of the American military doing the sort of things that were done, for example, in the former Yugoslavia and many other examples that could be cited through history. But do you think that Congress had that in mind, that we are taking the death penalty off the table for offenses like that?”

Rape as a war crime is an aggravated form of rape that can be charged separately under the UCMJ, replied Vladeck. “So, when Mr. Wall says our position requires this court to take that off the table, frankly, he’s just wrong.”

One way for the court to avoid the constitutional issue without accepting either side’s statutory argument would be to affirm by an equally divided court, which would leave in place the court of appeals rulings dismissing the charges against Briggs, Collins and Daniels. One would have to think that is still on the table, too.