Grieving RBG: Words of sorrow and gratitude from mourners at the court 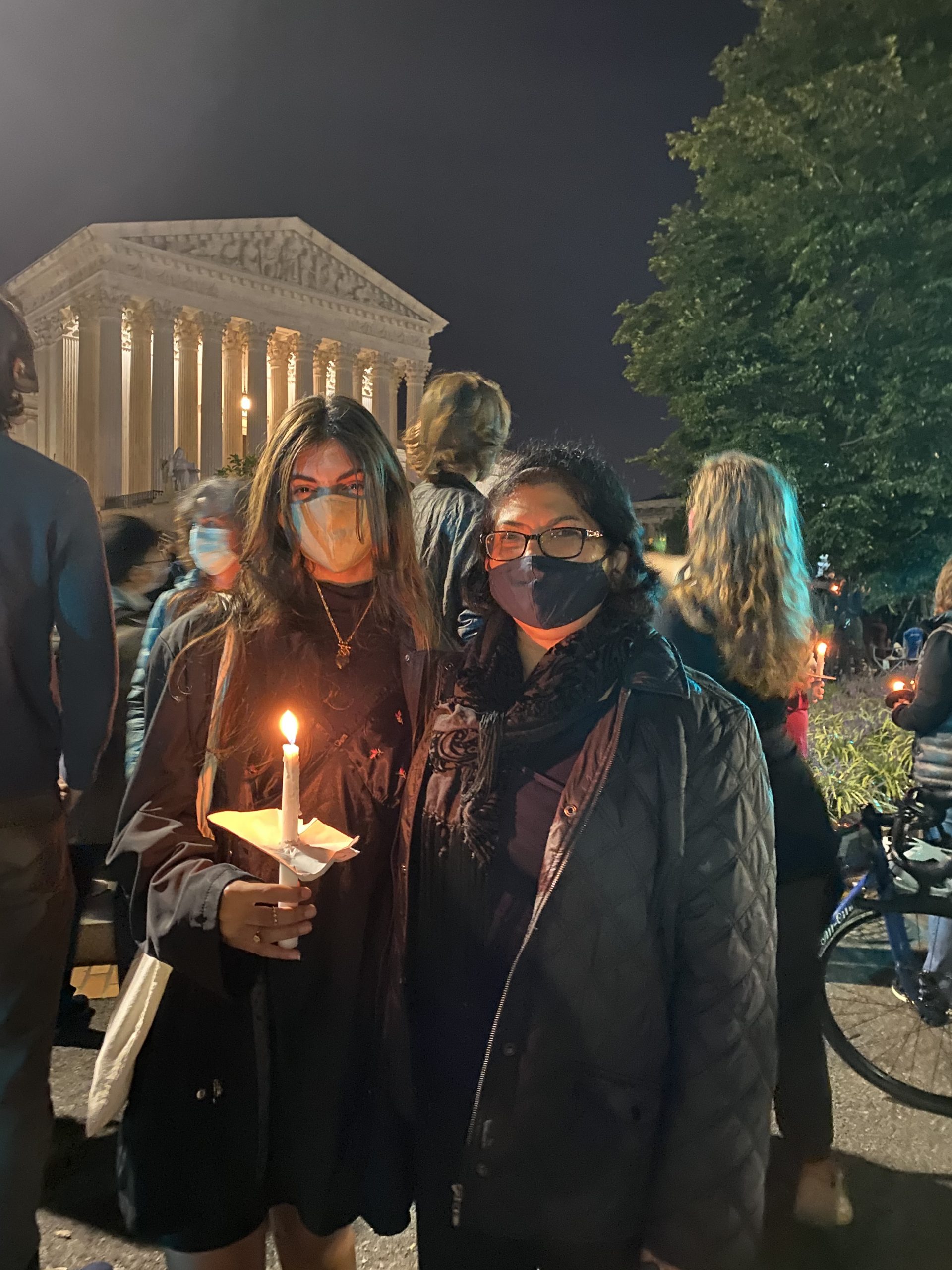 As soon as the public learned of the death of Justice Ruth Bader Ginsburg on Friday evening, mourners began gathering outside the Supreme Court. Leaving flowers, candles and messages in chalk written near the courthouse steps, thousands of people have paid their respects to a woman who inspired a generation and, late in life, attained an iconic status in American culture. Over the weekend, SCOTUSblog’s deputy manager, Katie Bart, interviewed members of the public who gathered in remembrance and mourning. Their words make up the latest episode of SCOTUStalk.

Amy Howe: [00:00:03] This is SCOTUStalk, a nonpartisan podcast about the Supreme Court for lawyers and non-lawyers alike, brought to you by SCOTUSblog.

Katie Bart: [00:00:13] Welcome to SCOTUStalk. I’m Katie Bart. Thanks for joining us. On Friday, September 18th, Justice Ruth Bader Ginsburg passed away from complications related to pancreatic cancer. She served on the Supreme Court for 27 years. The Supreme Court released statements from the eight justices and two retired justices on Saturday. Chief Justice John Roberts called her a “tireless and resolute champion of justice.” Justice Thomas said that she was a “superb justice who exacted the best from each of them, whether in agreement or disagreement.” Justices Elena Kagan and Sonia Sotomayor said that to them, as to countless others, Ruth Bader Ginsburg was a hero. Justice David Souter, who retired from the bench in 2009, said that he “loved her to pieces.” Almost immediately after news of her passing, thousands of people were drawn to the steps of the Supreme Court to mourn and celebrate her life. Here’s Tiffany Thompson on why she visited the court and what Ruth Bader Ginsburg meant to her.

Jill Marie Bussey: [00:01:46] I couldn’t help but be here. I felt called to come to the court. I’m a woman lawyer. And Ruth Bader Ginsburg is a tremendous role model in my life and so many women in my field. When she was appointed to the Supreme Court, I remember that day vividly. I was in college at that time and I remember them doing the background on the news and learning about how she learned from Charles Hamilton Houston and Thurgood Marshall’s approach to challenging the law. And not just inspired me because I had already heard of Charles Hamilton Houston and Thurgood Marshall, but I didn’t know that she took a page from their book and applied it to trying to achieve equality for women. And I then realized that I was able to play high school sports because of her, like there was so much. I just remember that all coming to me when I was in college and I knew I wanted to go to law school at that time. But it was her inspiration that made me think of how I could apply a law degree for good. And now I’m an immigrant attorney, immigrant advocate, and I’ve seen her. I’ve come here to the court and seen cases before her in the court, and I’m just very grateful for her service. And it’s a tremendous loss. But her legacy will live on.

Dawn Popp: [00:03:19] I just felt such a tremendous sense of loss when I heard yesterday. I was just so devastated. And as soon as I heard that something was happening today, I knew I had to be here. I’m a lawyer. And I mean, I think every female lawyer in this country is inspired by her. I mean, she’s a role model and she’s someone that I have looked up to for as long as I can remember. She’s just such an incredible trailblazer in terms of her career before being on the court. And then her decisions on the court have been just so groundbreaking in terms of women’s rights. I mean, I just I every female attorney I know idolizes her. It’s just it feels like a huge, very personal loss. Her whole career. I feel like I have been I’ve been following her. And I always I mean, her dissents are just works of art. And, you know, in addition, in addition to sort of the law that that she has been part of making, you know, just as a writer and as a thinker, I’m just you know, she’s the kind of lawyer that that I aspire to be.

Emma: [00:04:39] Sure, she was pretty much a legend to so many young women, including myself. And it’s just a lot of people, like my friends included, like we’re all kind of like, you know, women like us and we try to like, you know, empower others. I’m 16. And the thing is, none of us really, really know her and we respect her. As we all have all of our lives, but we’ve never really known the stuff that she fought for until now, and we’ve never really it’s never really come to light because we’ve kind of grown up with those privileges.

Emma’s Mom: [00:05:16] Oh, yes, I’m Emma’s mom. And yeah, I think she was an important, definitely an important figure. And at this moment in time, it is just all the more serious. It’s something that you take seriously. It’s disheartening. It’s very it’s you know, you felt the gut wrenching when you heard the news and she meant so much to so many people.

[00:05:47] And one little petite little lady could do so much with her demeanor and her ease of getting in the fight, she thought, and how tenacious she was with her battles with her health as well as the walls going to a school at Harvard with all the men and having to stand out.

[00:06:14] And, you know, we as a culture and a representative, we want to hopefully live up to that and inspire the young people and inspire people just out of the goodness. Right. It’s not vicious or vitriolic. She carried herself very well. She was classy, I think. I think she did a lot.

[00:06:39] When I come to mind, when you think of, like, sorry to say, Mother Teresa, somebody’s bigger than life that took on so much and stood for so much and had the integrity and the principles to live by and to teach young kids. I mean, just her notoriety now with young kids is just amazing. I had graduated from high school in 1991. She was momentous at that time. And you know her. It was just amazing. And, you know, hopefully it will. I hope this moment will remind people it is important to vote.

Girl: [00:07:24] I am here to mourn. And she definitely made an impact on my life. She was just a really amazing person who I did not know personally, unfortunately.

KB: [00:07:38] We will end with words from Justice Stephen Breyer: “A great justice, a woman of valor, a rock of righteousness. And my good, good friend. The world is a better place for her having lived in it. And so is her family, her friends, the legal community and the nation.”

We plan to be back next week with stories and memories from former clerks to Justice Ginsburg.

AH: [00:08:05] That’s another episode of SCOTUStalk. Thanks for joining us. Thanks to Casetext, our sponsor, and to our production team, Katie Barlow, Katie Bart, Kal Golde and James Romoser.