Empirical SCOTUS: If Ginsburg were to leave the court, her departure might resemble Thurgood Marshall’s 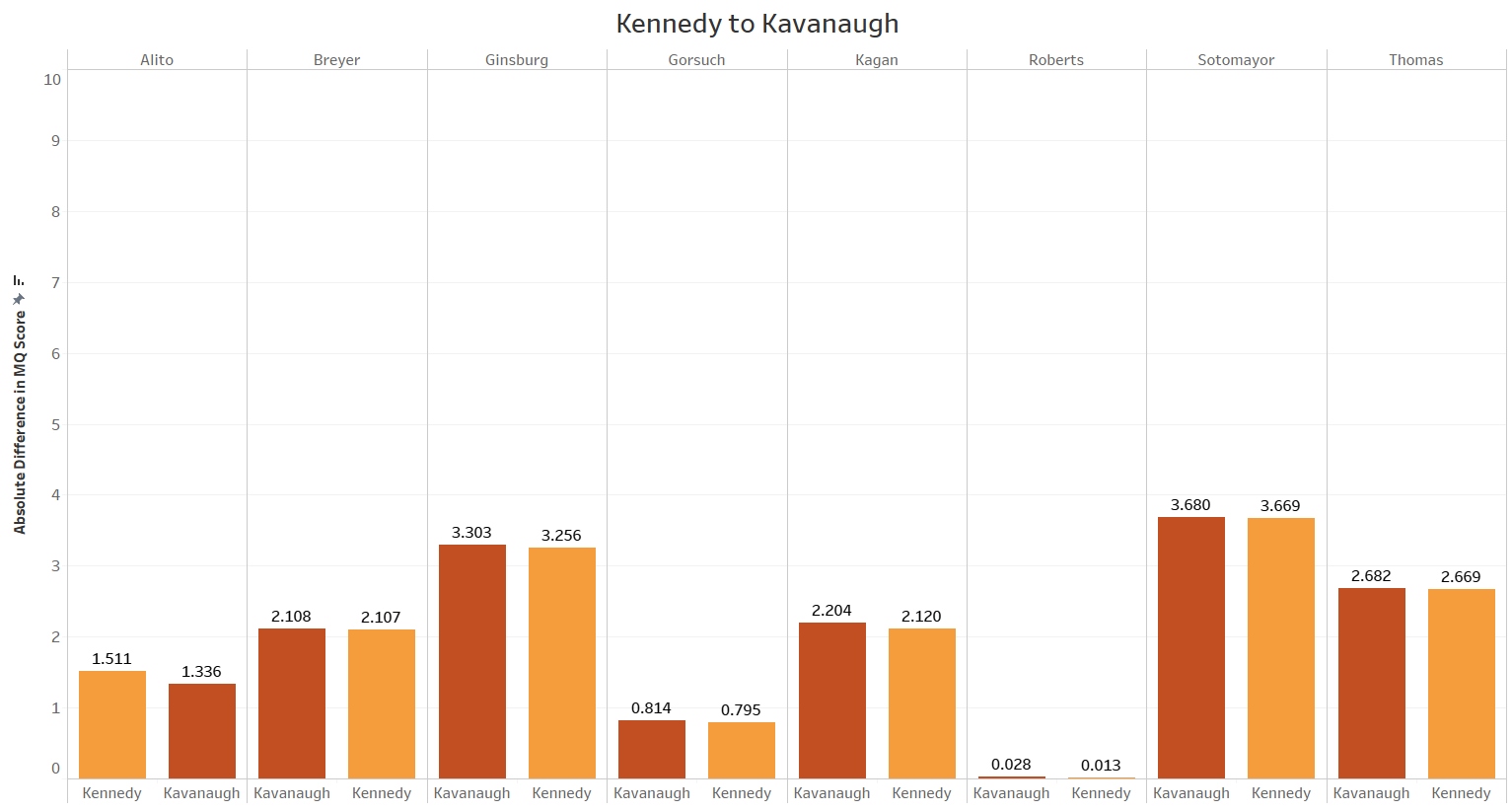 Justice Ruth Bader Ginsburg’s health is in the news again this year. She announced last month that she was being treated with chemotherapy — the fourth time since 1999 that she has battled cancer. After she was diagnosed with pancreatic cancer in 2009, she resisted pressure to retire from the Supreme Court under the Obama administration. With multiple hospital stays this year and the cancer recurrence, many question how long she will be able to stay on the court and whether her tenure will outlast Donald Trump’s presidency. Some liberals continue to express frustration that Ginsburg did not retire under President Barack Obama.

Retirements and replacements at the court occur in different patterns. A potential retirement by Ginsburg harkens back to Justice Thurgood Marshall’s retirement in 1991. Like Ginsburg, Marshall was a liberal leader on the court. Before joining the bench, Ginsburg founded the ACLU Women’s Rights Project, and Marshall established the NAACP Legal Defense and Education Fund. Marshall’s health was in decline during the Reagan years, and once President George H.W. Bush was elected in 1988, he might have guessed he would need to step down before the end of the Bush presidency. Still, Marshall was known to somewhat sarcastically confide to his clerks, “If I die, prop me up and keep on voting,” not wanting a conservative justice to be placed in his stead. In the end, Marshall retired from the court with Bush still president in October 1991, citing health and age. He was replaced by Justice Clarence Thomas, who has become one of the most conservative justices. The replacement of Marshall with Thomas was one of the biggest ideological shifts in a single seat.

An often-used metric to assess ideology on the court is Martin-Quinn scoring. Although MQ scores do not directly measure whether a justice is liberal or conservative, they do measure justices’ voting agreements with each other by placing all justices on the same scale and bridging these agreement scores across time. The statistical modeler then needs to define a liberal-conservative dimension by deciding on a prototypic liberal and conservative justice to sit on either side of the axis. Since all justices are then on the same scale, the MQ Scores are not just pairwise measures between two justices.

MQ scores are somewhat arbitrary in magnitude, but they have never exceeded positive 10 for conservative justices or negative 10 for liberal justices. These bookends are meant to provide some sense of the scores’ usual range, which is meaningful in a relativistic sense. Most importantly, similar MQ scores mean that justices are closely aligned in their voting, while greater distance between scores means that two justices often disagree. 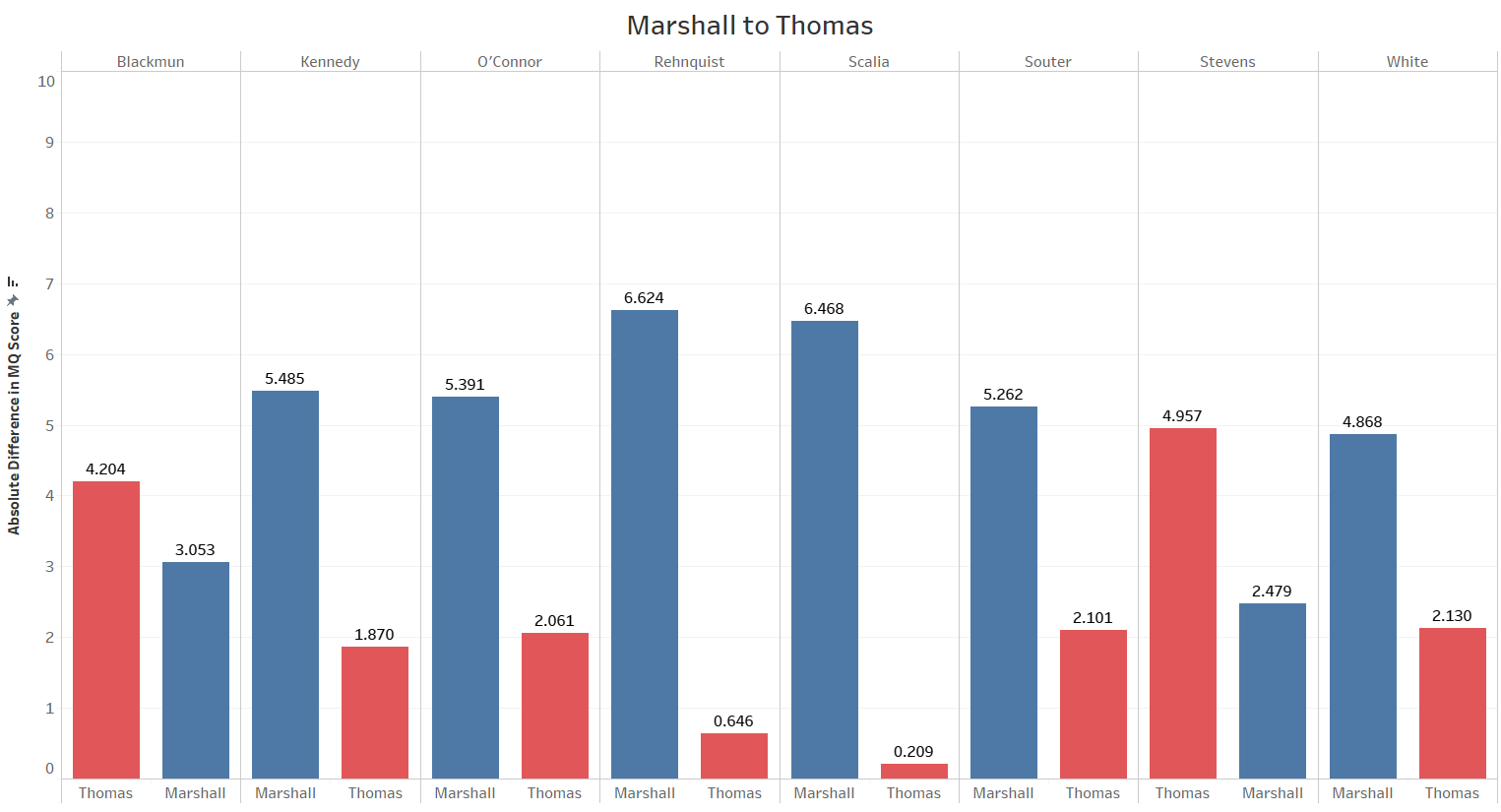 Two of the justices that stand out with these distance measures are Chief Justice William Rehnquist and Justice Antonin Scalia. As both justices were predominately conservative, they tracked closely to Thomas — which is evident from the low distance value. On the other hand, these same justices have the widest score differences from Marshall, who was the most liberal justice on the court at the time of his retirement. Marshall, like Ginsburg, sat on a predominately conservative court in his final years, and he was in the majority only 67% of the time in his final term. Thomas, in contrast, was in the majority nearly 77% of the time during his first term.

An analysis of a different Supreme Court seat underscores the magnitude of the ideological shift from Marshall to Thomas. The next chart compares the score differences of Justice Anthony Kennedy in his final year on the court with the score differences of his successor, Justice Brett Kavanaugh, in his first year. Kennedy was in the majority 92% of the time in his final term. He also tended to vote quite conservatively that term: He voted with the conservative justices in all 14 5-4 decisions that broke down along ideological lines. Kavanaugh was in the majority 88% of the time in his first term and was in seven conservative majorities in 5-4 decisions, compared with just one occasion when he was the swing vote for the liberal justices. Not surprisingly, then, Kennedy’s MQ score differences in his final term track quite similarly to Kavanaugh’s in his first term – an indication that the shift from Kenendy to Kavanaugh did not significantly alter the court’s ideological balance.

Where does Ginsburg fit into all of this? Like Marshall, Ginsburg is a liberal justice on a predominantly conservative court. Her 75% frequency in the majority this past term is on the low end of the current slate of justices and is between those of Marshall in his last term (67%) and Thomas in his first (77%). 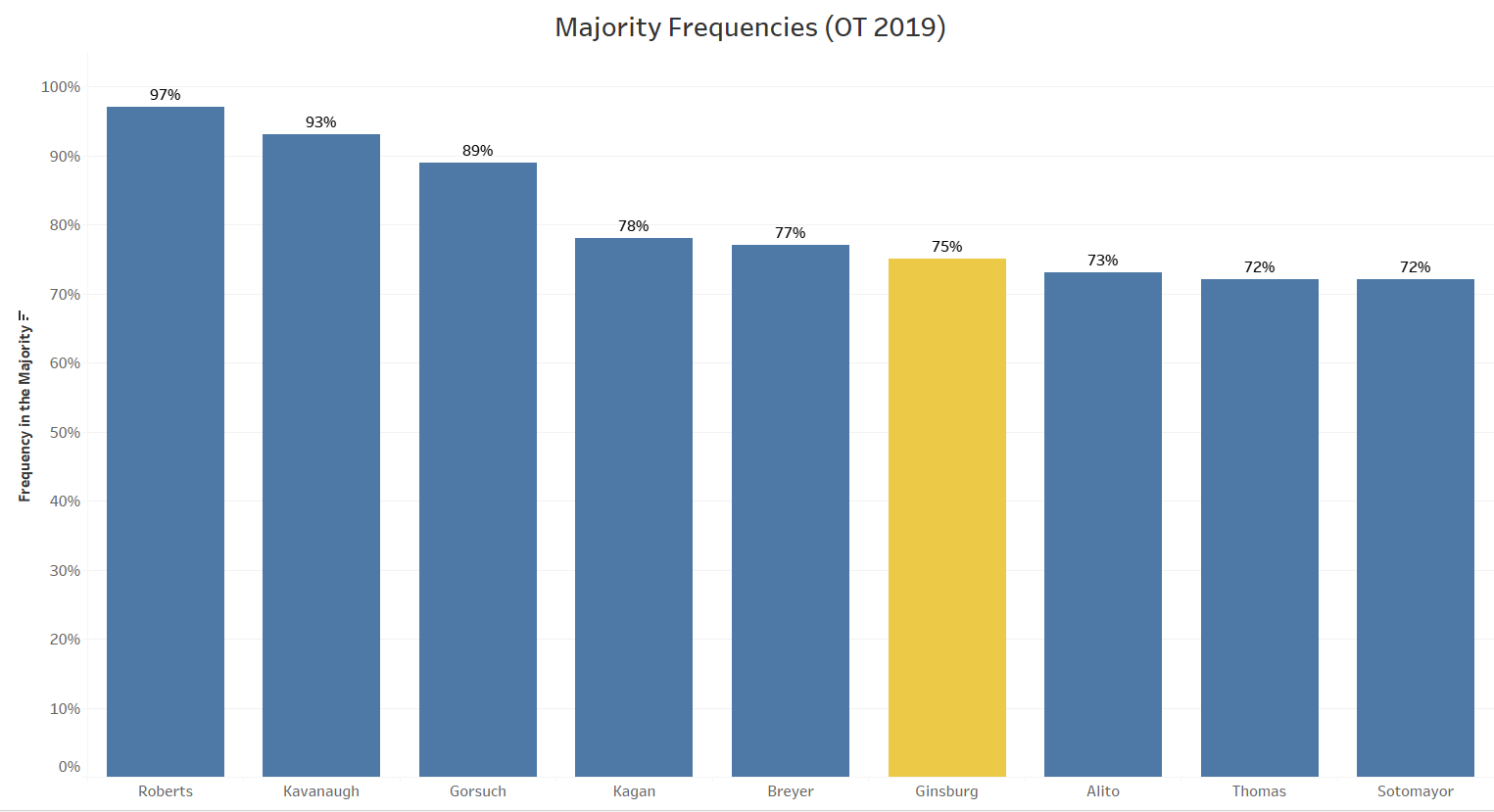 Six of the justices fall into a narrow band of majority frequencies between 72% and 78% for OT 2019. Only Chief Justice John Roberts, Justice Neil Gorsuch and Kavanaugh fall outside of this band at the higher end of the spectrum. Possibly more telling are the justices’ rates in the majority in the court’s 14 cases that were decided 5-4 or 5-3 during the recent term. The five more conservative justices were in the majority in 10 of them. Roberts sided with the more liberal justices in two others, and Gorsuch sided with the liberals in one. The final 5-4 decision, Georgia v. Public.Resource.Org, included justices of mixed ideologies in the majority. Ginsburg was in dissent in that case, making her overall frequency in the majority of 5-4 or 5-3 decisions this past term only 21%. 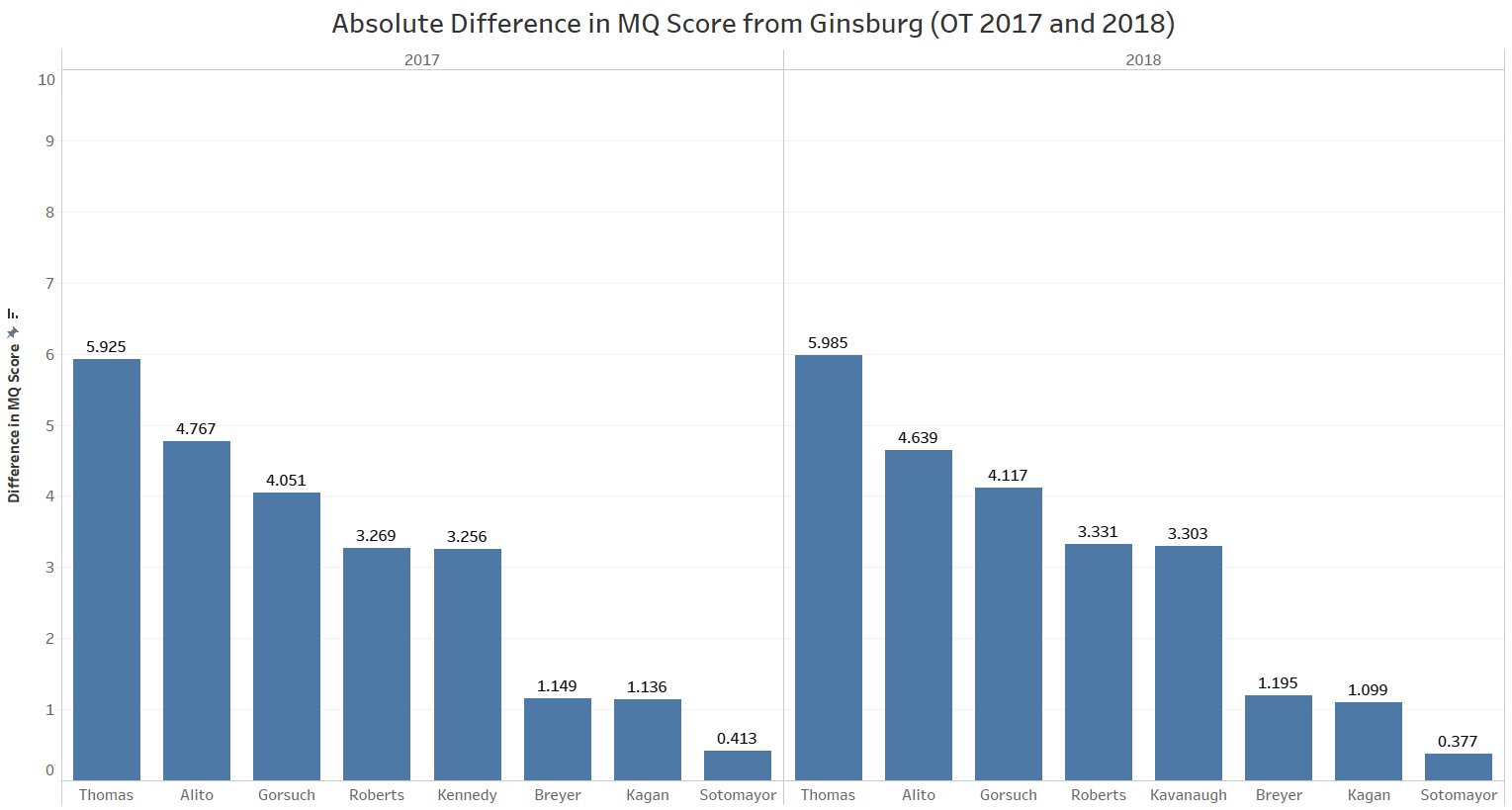 This leaves a few possible scenarios for the future of the court depending on how long Ginsburg remains.

Ginsburg needs to retain her spot on the court until a new president is sworn in, not just elected, to ensure someone other than Trump fills her seat. If Trump fills Ginsburg’s seat, chances are the justice will be at least as conservative as Roberts and Kavanaugh and will very possibly be closer to edge of the conservative continuum, like Thomas and Justice Samuel Alito. A few Republican presidents have appointed justices who have drifted in the liberal direction over time, but this is unlikely now given the vetting that goes into nominations. A seismic shift from a Trump-filled Ginsburg vacancy would likely resemble the transition from Marshall to Thomas.

If, on the other hand, Ginsburg were to retire with a Democratic president in office, her seat would likely be filled by a justice who aligns most closely with Justices Stephen Breyer, Sonia Sotomayor and Elena Kagan. This shift would look much more like the one from Kennedy to Kavanaugh.

Only time will tell which transition we’ll encounter. The likelihood of Ginsburg remaining on the court for another four years if Trump is reelected seems low. Ginsburg’s health over the next five months and the results of the 2020 election, both for president and for the Senate, will likely dictate whether the court takes an even sharper turn to the right or whether it remains at least somewhat similar to how it looks today.