Opinion releases in July are also an unusual twist. Probably due to the court’s delayed argument calendar, the court released eight merits opinions in July. The last time the court had issued any decision in July was on July 1, 2014, when it released an unsigned opinion in Williams v. Johnson. And prior to this year, the court’s last signed decision in July was United States v. Winstar in 1996. The last time the court released at least nine decisions in July was in 1986 under Chief Justice Warren Burger.

Chief Justice John Roberts was a frequent member of the court’s majority this term. He was in the majority in 97% of the term’s cases. The only other justice to decide 50 or more cases in a term and maintain such a high frequency in the majority since OT 2005, when Roberts joined the court, was Justice Anthony Kennedy (he achieved the feat three times). 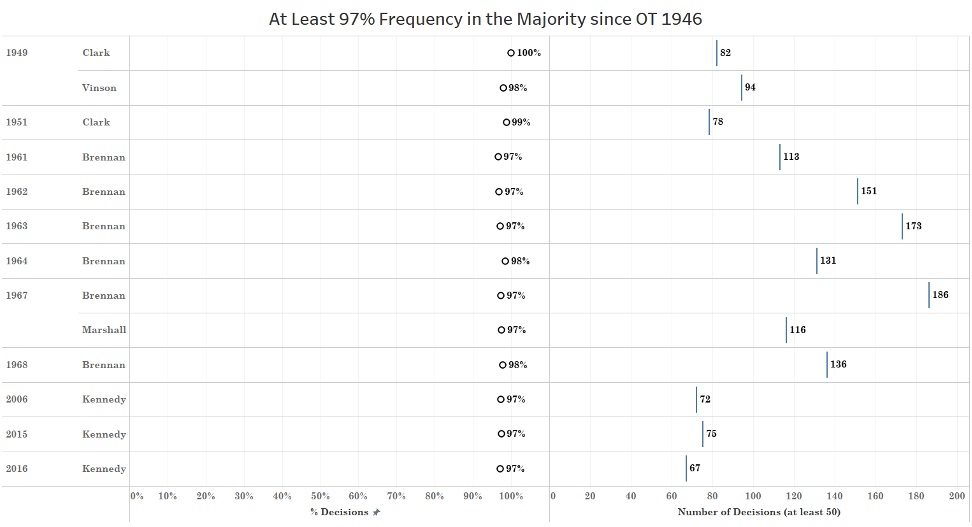 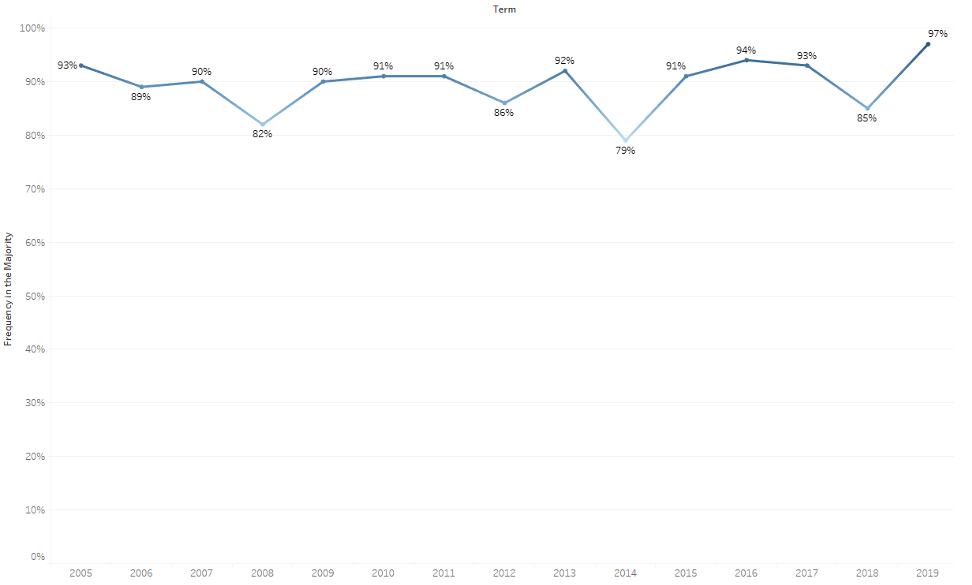 In this role as an anchor justice, Roberts held together diverse coalitions of justices in some of the most important cases of the term. This was a feat occasionally attributed to Kennedy during his tenure, in instances such as Masterpiece Cakeshop v. Colorado Civil Rights Commission, in which Justices Elena Kagan and Stephen Breyer concurred in Kennedy’s 7-2 decision instead of siding with their more liberal colleagues Justices Ruth Bader Ginsburg and Sonia Sotomayor in dissent. Roberts likewise held together 7-2 majorities in both cases dealing with President Donald Trump’s tax returns on the last day of the term: Trump v. Vance and Trump v. Mazars. Justices Clarence Thomas and Samuel Alito were the only dissenters in both cases. And one day prior to those opinion releases, the court issued two other 7-2 decisions in Little Sisters of the Poor Saints Peter and Paul Home v. Pennsylvania and Our Lady of Guadalupe School v. Morrissey-Berru. In those cases, Kagan and Breyer concurred rather than joining Ginsburg and Sotomayor in dissent.

With Roberts as the anchor, though, a clear majority bloc seems on less solid footing than in the past. Although conservatives might have envisioned Kavanaugh’s arrival at the court – replacing the more moderate Kennedy – as likely to solidify a strong right wing on the court, this has not been clearly the case. Roberts and Kavanaugh have both been frequent members of the court’s majority in each of the past two terms, with Roberts in the majority appreciably more this term (97%) than last (85%), and Kavanaugh at 93% this term compared to 88% last term. Alito and Thomas, however, have not shown increased propensity to join the court’s majorities, as Thomas was in the majority 72% of the time in each of the last two terms, and Alito dropped from 79% to 73%.

The tea leaves on the court moving forward are complicated to read. While Ginsburg and Sotomayor have seemingly pushed to the left, Alito and Thomas appear entrenched on the right. The rest of the justices remain somewhere closer to the center, with Roberts as the court’s anchor. Many will watch to see whether Roberts helps move the court further to the right in future terms, but as it stands now, he seems content to remain an active member of the court’s majority with justices from either camp, even in politically charged matters like those involving the president. As we move toward the third term with both Kavanaugh and Gorsuch on the bench, we will see whether this continues to truly be Roberts’ court.

This Stat Pack would not be complete without the tireless efforts of Kalvis Golde and Andrew Hamm. The United States Supreme Court Database was used for historic data in this post.

Update: After their initial release on July 10, 2020, this post and Final Stat Pack were updated on July 20 to reflect the court’s release of an additional merits opinion in Barr v. Lee.