Courtroom access: A misleading “mash-up” of pauses at the podium 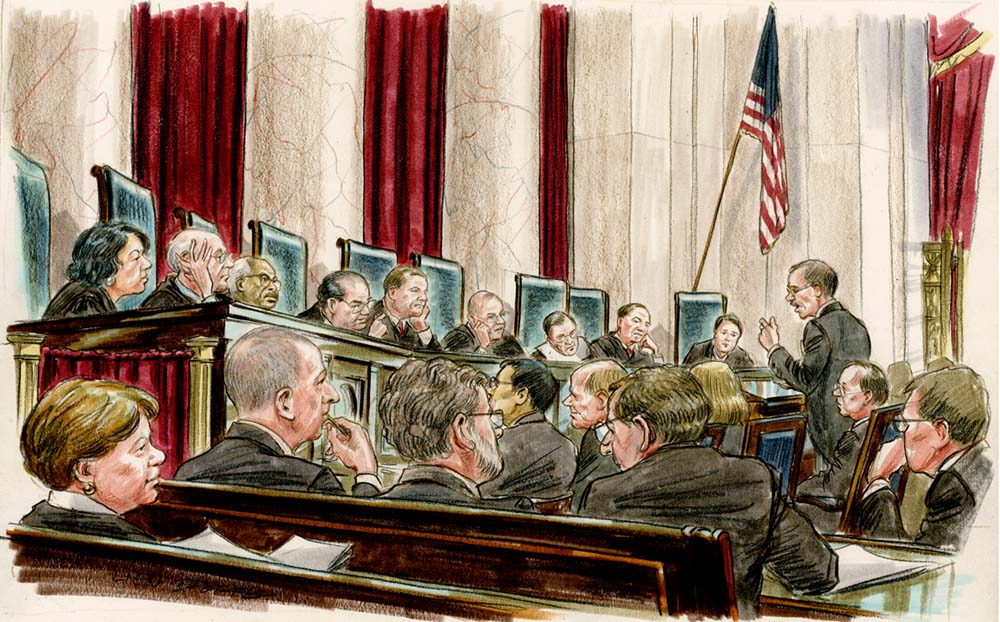 Verrilli at the podium during his ACA argument on March 27, 2012 (Art Lien)
Share

Tuesday, March 27, 2012, was the second of three days of oral argument in the most important Supreme Court case of the Obama administration: the challenge to the Affordable Care Act’s individual mandate. When Solicitor General Donald Verrilli stepped to the podium that morning, with the fate of the administration’s signature achievement at stake, the weeks of preparation and practice had taken their toll on his voice.

Verrilli at the podium during his ACA argument on March 27, 2012 (Art Lien)

Verrilli recalled in a 2016 interview with NPR, “My throat kind of seized up a bit, so I took a sip of water, and it went down the wrong way. And I just literally couldn’t get the words out for a little bit. And not surprisingly, I guess my attention sort of wavered. I lost my focus.” Here’s how the first minute or so of Verrilli’s argument went:

Although the government’s position that the individual mandate could be upheld as a tax ultimately prevailed, Verrilli’s performance was widely panned by commentators at the time. Calling it “one of the most spectacular flameouts in the history of the court,” Mother Jones noted that “Verrilli stammered as he began his argument. He coughed, he cleared his throat, he took a drink of water. And that was before he even finished the first part of his argument.”

But one influential group went even further. The Supreme Court had taken the rare step of providing same-day audio of the argument, which it occasionally does in extremely high-profile cases. (Usually, the audio is made available on Friday afternoon of an argument week.) The next day, the Republican National Committee put this anti-Obamacare ad on YouTube, using Verrilli’s delivery to demonstrate that the ACA is a “tough sell”:

In the RNC version, Verrilli stops twice to take sips of water and then to say, “Excuse me,” and resumes his argument by stuttering, stumbling over his words, and then pausing for six or seven seconds. But in reality, Bloomberg’s close comparison of the ad and the original audio revealed, “Verrilli took a sip of water just once, paused for a much briefer period and completed his thought — rather than stuttering and trailing off as heard in the edited version.” RNC Communications Director Sean Spicer told Bloomberg that “the video was a ‘mash-up,’ condensing and splicing together several separate pauses and stutters by Verrilli during the first two minutes of his argument, produced to illustrate how much difficulty he had defending the health-care law.”

Some court-watchers worried that this example of how audio can be manipulated to misrepresent oral argument might discourage the court from opening up its proceedings further by allowing video cameras in the courtroom. But live video of arguments might not be as easy to doctor as audio. And people who watched the argument inside the courtroom weren’t as critical of Verrilli’s performance as those who only heard it. One veteran Supreme Court reporter recounted that “in the room, you saw what was happening. You knew that he had to take a sip of water.” An advocate who witnessed the argument agreed: “It was just a frog in his throat. If you’d … been able to see that, it would have been much harder to lampoon him in the way that so many people did. In fact, you would have had a more accurate record of what happened in the courtroom.”