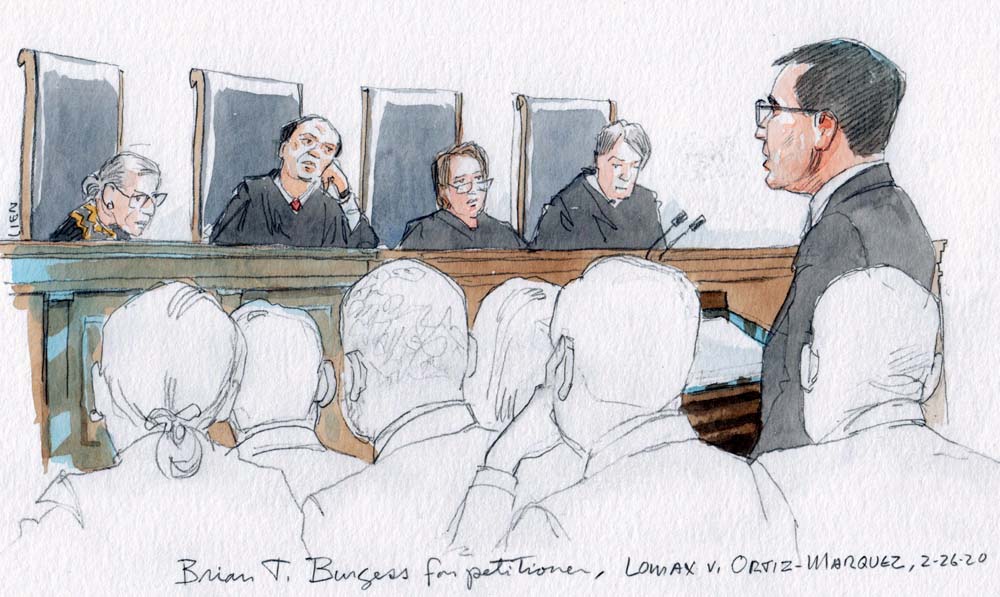 Under the PLRA’s “three strikes” provision, 28 U.S.C. § 1915(g), absent “imminent danger of serious physical injury,” prisoners may not file or appeal a federal civil action in forma pauperis if they have had three or more federal civil actions or appeals dismissed as “frivolous, malicious, or fail[ing] to state a claim.” (For prisoners, IFP status does not waive the filing fee, but rather allows them to pay fees over time, after filing.) The issue in this case is what counts as a strike, and in particular (in the court’s own version of the question presented), “Does a dismissal without prejudice for failure to state a claim count as a strike under 28 U.S.C. §1915(g)?”

The court heard from attorney Brian Burgess for the plaintiff, Arthur Lomax; Colorado was represented by its solicitor general, Eric Olson, with the amicus support (and shared argument time) of U.S. Deputy Attorney General Jeffrey Rosen. (It’s one of the perks of being the DAG to argue one case in the Supreme Court. The case is usually, as here, a small one; the main point of this exercise may well be the courtroom drawing for the DAG’s wall. Still, perhaps Rosen enjoyed the break from Ukraine-related matters and the like.)

The argument on Lomax’s side that seemed to grab the justices’ attention was a functional one. It makes no sense, several justices posited, to distinguish between a district court order dismissing a complaint with leave to amend and a district court order dismissing the action without prejudice, with leave to refile. Yet the state concedes both that the former is available under the PLRA and that it is not a PLRA strike.

Justice Brett Kavanaugh began this line of inquiry: “So a lot of district judges will grant leave to amend freely, but a number of others for a lot of reasons, clearing the docket and otherwise, will dismiss without prejudice. And yet those two things, which are functionally identical, for the prisoner, will be treated differently in terms of the strikes under your view, is that right?”

And Justice Elena Kagan emphasized the randomness of district judges’ choice between these two paths:

Maybe it just depends on the culture and practice of particular district courts. … Some of my clerks who have clerked on the D.C. District Court suggested to me that the incentives all cut in favor of dismissing without prejudice, rather than giving leave to amend, because of the way they count their docket. So, if that’s correct, if courts are doing this randomly or if some are subject to one set of incentives and others subject to an opposite set of incentives, but they’re all trying to do the same thing, which is to deal with a complaint that has not pled sufficient facts and telling the person go do it again, why should we treat those two cases differently for purposes of counting strikes?

There were similar contributions from Justices Ruth Bader Ginsburg and Sonia Sotomayor.

Neither Olson nor Rosen offered any answers that put this point to rest. Olson’s best response was that the choice between a dismissal (of the complaint) with leave to amend versus a dismissal (of the action) with leave to refile isn’t random at all—“Rule 15 requires leave to amend to be freely given, where justice requires, whether or not it’s as of right,” he said. In other words, there is no need to worry about overeager district judges hurrying to dismiss cases without prejudice; dismissals of the action, even without prejudice, ought to be occurring only where justice does not require that the plaintiff be able to amend the complaint.

Rosen’s response was to emphasize the need to shut down prisoner litigation: “[I]f we say that ones without prejudice are not going to be strikes, that means, in effect, … inmates may file an unlimited number, in terms of not paying a filing fee, an unlimited number of IFP actions without consequence.” (Nobody called Rosen on this, but actually, IFP prisoners—unlike other IFP litigants—do pay filing fees; what IFP status gets them is the right to pay the fees over time, not in advance.) My own impression? Count the justices as unpersuaded.

Justice Samuel Alito had an additional response. In a question to Burgess, Alito raised the prospect of unintended anti-prisoner consequences: If only a dismissal with prejudice counts as a PLRA strike, that might induce irritated district judges to hand down such dismissals to shut down frequent filers. Burgess countered that he was not worried, trusting district judges (disciplined by the possibility of reversal if they disallowed amendment when amendment could cure the issue).

A second argument from Kagan—this one taken directly from Lomax’s brief—was more technical. She said:

Rosen’s response was to try to persuade the court that the plain statutory text resolves the issue, because “the word ‘dismissal’ encompasses both.” He pointed out that the PLRA does not mention Federal Rule of Civil Procedure 41, under which Rule 12(b)(6) dismissals are presumed to be with prejudice: “I don’t think there’s any reason to go to the language of Rule 41 because its language dealing with what counts as an adjudication on the merits is not language in the statute. So I don’t see that it actually provides interpretive benefit.” The justices who spoke seemed not to bite at that; they wanted to know how to resolve the ambiguity they perceived in the statute.

With interpretive space opened by the ambiguity, several policy issues got airtime:

Should PLRA strikes be deemed appropriate only if a prisoner acted badly by filing a loser case?  Kavanaugh asked: “Suppose a prisoner files a suit and the district judge, instead of granting leave to amend, dismisses without prejudice; the prisoner corrects the error, fixes the defect, files a suit and prevails. Not only is it sufficient to state a claim, prevails in the case. You would still say that prisoner has a strike even though they won the case? … Doesn’t that strike you as odd, that you have a winning case and you get a strike under the PLRA?”

Should we feel bad for courts faced with large amounts of prisoner litigation? Chief Justice John Roberts thinks perhaps we should: “[S]ince  … one of the driving factors [of the PLRA] was to ease the burden both in volume and in court time, why shouldn’t we at least consider that rather than entirely the blameworthiness of the filers?” And later: “Why do you assume that a procedural defect doesn’t tax the resources of the court? And it’s not just the court; it’s the entire judicial system and—and the, you know—as I said, the service of process and all these other things. Why is that?”

Does it matter that affected plaintiffs may not be nice people? Rosen several times went out of his way to emphasize the plaintiff’s crime. No pick-up on the point by any justice.

With no questions at all from Justices Clarence Thomas, Stephen Breyer and Neil Gorsuch, this is a hard vote count. But if forced to bet, I’d say the transcript favors Lomax.