Argument analysis: Court likely to rule that a defendant preserves appellate challenge to length of sentence merely by arguing for lower one, but precise wording of opinion will be important 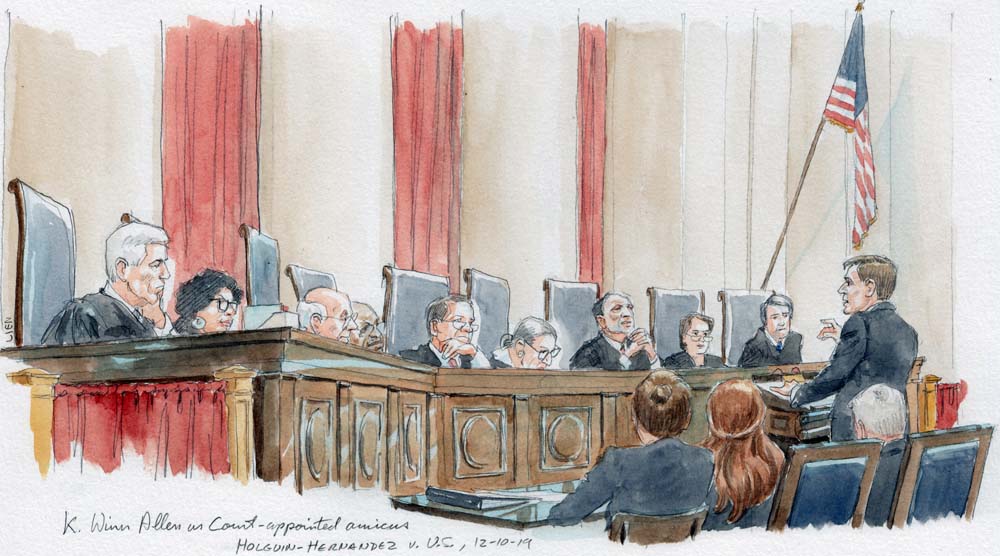 Justice Byron White, who as a retired justice hired a law clerk named Neil Gorsuch, once wrote that “a prime function of this Court’s certiorari jurisdiction [is] to resolve” conflicts between the federal circuits. Yesterday the court heard argument in Holguin-Hernandez v. United States to review a sentencing rule of the U.S. Court of Appeals for the 5th Circuit that is out of step with nine other circuits. The argument was unusually brief, just over 45 minutes, and the transcript reads as somewhat desultory. It seems clear that the 5th Circuit will be reversed; indeed, one can wonder why the court even bothered with briefing and argument (but see below). A need to fill the argument calendar? Or perhaps Gorsuch, who asked no questions, is imbued with White’s circuit-split-correction spirit. In any case, Justice Sonia Sotomayor asked the only really difficult question: “How do we write this opinion?” in order to offer the doctrinal “clarity” that the solicitor general has requested.

The facts that led to a surprising grant of full review

As I previewed last week, in a 2018 criminal supervised-release revocation case, Gonzalo Holguin-Hernandez argued for either no prison time or “certainly less than the guidelines.” He gave a number of reasons, but the judge imposed 12 months (the low end of the federal Sentencing Guidelines range), saying that “the underlying case … means something.” On appeal, the 5th Circuit reviewed only for “plain error” because, the court said, Holguin-Hernandez “failed to raise his challenges in the district court.” The court seemed to be applying its long-standing rule that unless a defendant who has argued for a lower sentence also registers an objection when a higher sentence is imposed, only deferential plain-error review will be allowed on appeal. All other circuits have rejected that requirement.

No surprise. Federal Rule of Criminal Procedure 51 plainly states that “exceptions to rulings or orders of the court are unnecessary,” and section (b) of the rule makes clear that “[a] party may preserve a claim of error by informing the court – when the court ruling is … sought – of the action the party wishes the court to take.” So here, when Holguin-Hernandez sought certiorari, the solicitor general’s office initially waived its right to file a response and then, when asked, conceded that the 5th Circuit’s rule was in error. (However, the solicitor general argued, then and now, that Holguin-Hernandez’s sentence was appropriately reasonable, even if remanded for the proper standard of review.) But the Supreme Court nonetheless granted certiorari, and appointed K. Winn Allen, a former law clerk to Justice Samuel Alito, as amicus to defend the 5th Circuit’s rule.

What must a defendant’s lawyer say to preserve full appellate sentencing review?

Arguing for Holguin-Hernandez, attorney Kendall Turner noted that Rule 51 plainly “tells parties how to preserve claims of error for appeal,” and “[t]here’s no need to tell the court twice.” There is no “practical merit” to a requirement that the defendant must again say “I object,” and, as Turner noted in rebuttal, the “[n]ine courts of appeals” that do not require a repeated objection “show that the Fifth Circuit’s rule is not necessary to the effective functioning of courts.” She emphasized the government’s agreement with this view, and said that the amicus was “tr[ying] to defend the judgment below on alternative grounds” – grounds that Justice Elena Kagan later pointed out are not “what the question presented is.”

Chief Justice John Roberts asked what would happen if a defendant presented “a reason” on appeal that was “not even addressed by the defendant below?” Turner, and ultimately all the arguers, appeared to agree that a “fair notice standard” should apply. That is, a defendant must give district judges “fair notice” of their reasons for a lower sentence, to give the judge an opportunity for correction. If arguments or reasons for a lower sentence are never presented in the district court, then they may be forfeited or at most reviewable only for plain error. Alito also made the point that there may not always be “one particular, precise sentence” that is necessarily correct; courts of appeals review for “reasonableness” of sentences, which, as Justice Brett Kavanaugh noted, is a “very deferential” standard. For these reasons, Alito asked, should a defendant have to say more about why they think a lower sentence should be ordered? No, both Turner and Assistant to the Solicitor General Morgan Ratner agreed: “[A] defendant who argues [in the district court] for a lower sentence … preserve[s] the claim” on appeal that the sentence imposed was unreasonably high.

Winn Allen, the court-appointed amicus, steadfastly defended the 5th Circuit, and argued that a defendant should also be required to state the “grounds” and “facts and circumstances” in support of their sentencing request in order to preserve sentencing arguments for appeal. Of course, the 5th Circuit’s summary affirmance on this record does not seem to be consistent even with this more detailed proposal. But in any case, as Turner and Ratner both argued, the rule that Allen proposed is not consistent with the language of Rule 51, and a “fair notice” standard has generally served well to give lower courts guidance about what arguments are, or are not, well-preserved.

As I noted in my preview, full review rather than summary reversal may have been granted here in order to clarify how precisely to preserve and review the details of sentencing appeals. Ratner explained that such guidance could provide “significant value” – but she also added that “there could be some potential … to introduce confusion if [the court’s opinion] is not clear about just what is … and is not preserved” in district-court sentencing arguments. Sotomayor’s question, therefore, captured the challenge facing the court: The justices will want to get it precisely right in any resulting opinion, and they may disagree about the details. Whoever is assigned the majority opinion will have a delicate and, for thousands of federal criminal defendants as well as district judges, important task.

Kavanaugh, who was particularly active in this low-profile-case argument, repeatedly made the point that, in the end, any daylight between full appellate review for “substantively unreasonable” sentences and “plain error” review is “extremely small.” They “sound like” the same thing, when they are applied in practice. Kavanaugh’s observation provided a touch of real-world candor. Roberts, however, made the point that “substantively unreasonable” means “nothing more than an erroneous application of” statutory sentencing factors, implying that it produces a harder “look” at the facts than plain-error review might. Both Ratner and Allen maintained that the result here can make a difference in some cases. As I noted for this blog in August 2018 when Kavanaugh was nominated, he appears to have “a particular interest in federal sentencing and the Sentencing Guidelines.” It will be interesting to see whether he draws this assignment.

One last note: Seven lines toward the end of the argument show how remarkably polite the justices can be toward each other. As often happens, two justices began to speak at the same time:

JUSTICE KAVANAUGH:  And you –

JUSTICE KAGAN:  No, go ahead.

JUSTICE KAGAN:  This outside the range …

Of course, the more senior justice “won” here; the current chief justice and all the justices are notably committed to that practice. The moment itself was not unusual, although it is not often captured so clearly in a cold transcript. But, to me, such Alphonse-and-Gaston deference may be a reflection of a relatively small group of justices’ trying to recover from two exceptionally bruising confirmation years.

This case is not a blockbuster, and a dispositive opinion can be expected in a couple of months. But it is not unimportant. Many federal criminal litigators, as well as hundreds of federal judges, will be focused not so much on the result as on what the Supreme Court says is required in the tens of thousands of federal criminal sentencings each year.

Recommended Citation: Rory Little, Argument analysis: Court likely to rule that a defendant preserves appellate challenge to length of sentence merely by arguing for lower one, but precise wording of opinion will be important, SCOTUSblog (Dec. 11, 2019, 10:30 AM), https://www.scotusblog.com/2019/12/argument-analysis-court-likely-to-rule-that-a-defendant-preserves-appellate-challenge-to-length-of-sentence-merely-by-arguing-for-lower-one-but-precise-wording-of-opinion-will-be-important/