A “view” from the courtroom: A few more words 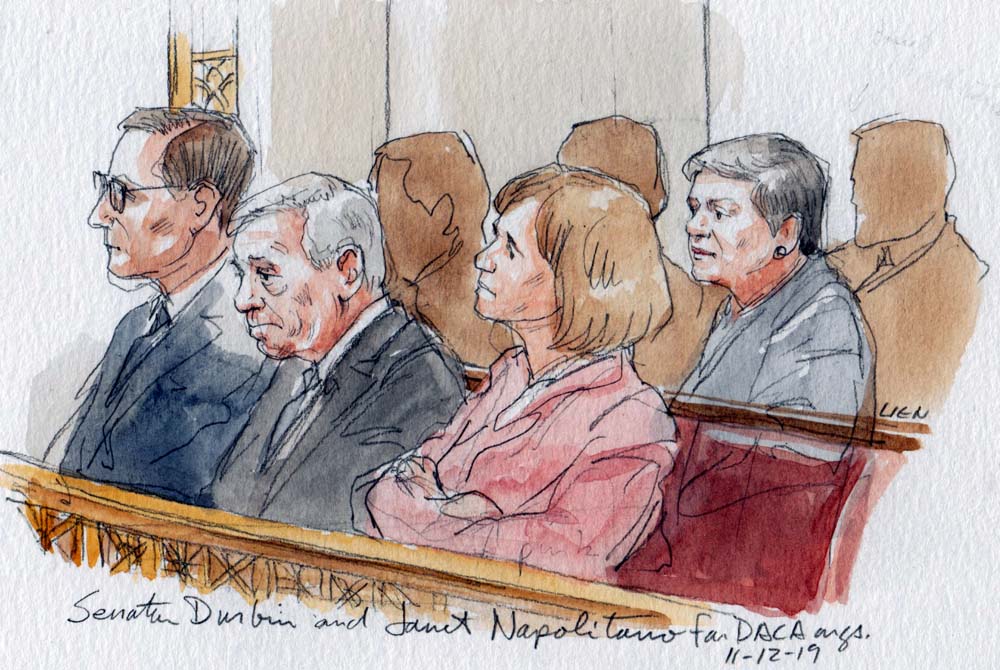 Another month, another blockbuster argument in the Supreme Court. Last month it was whether Title VII of the Civil Rights Act of 1964 prohibits employment discrimination based on sexual orientation and transgender status. Today, it is the Trump administration’s efforts to rescind the Deferred Action for Childhood Arrivals program, known as DACA.

We may yet have a similar blockbuster for each of the remaining five sittings of the court this term.

In the front row of the public gallery, Sen. Richard Durbin of Illinois, the Democratic whip in the Senate, has taken a seat minutes after appearing on CNN to call President Donald Trump’s efforts to rescind DACA “cruel.”

Behind Durbin sit five of the six DACA recipients who are named plaintiffs in the McAleenan v. Vidal case out of New York City, one of several consolidated cases before the justices today. Some of their lawyers in the bar section tell me that respondents Martin Jonathan Batalla Vidal, Antonio Alarcon, Eliana Fernandez, Carlos Vargas and Carolina Fung Feng are in that row.

One row behind them is Janet Napolitano, who was secretary of the Department of Homeland Security under President Barack Obama and who signed the memorandum that put DACA into effect. Now she is president of the University of California system, which is a plaintiff in one of the challenges to the Trump administration’s action to end DACA and the lead respondent here.

On the other side of the aisle, both figuratively and literally, is Ken Cuccinelli, the Republican former attorney general of Virginia and the acting director of U.S. Citizenship and Immigration Services, which is part of DHS. He is sitting in the middle section of the public gallery, while Durbin and Napolitano are in the section on the south side.

There are surely more so-called Dreamers here, including some who spent a long time waiting in the public line. And for the first time, there is a DACA recipient sitting at the counsel table.

As CNN Supreme Court reporter Ariane de Vogue noted over the weekend, Luis Cortes, a 31-year-old graduate of the University of Idaho College of Law who came with his parents to the United States from Mexico when he was one year old, is joining Theodore Olson at the table. Cortes became something of an expert in immigration law after his father was deported to Mexico, and he was in law school when DACA came into effect and allowed him the ability to get work as a lawyer.

When U.S. Solicitor General Noel Francisco arrives in the courtroom, he greets the opposing counsel, as is customary, including Olson, Cortes and Michael Mongan, the solicitor general of California, who will split the argument time with Olson on the respondents’ side.

Meanwhile, Josh Blackman of South Texas College of Law, a frequent commentator on the court, arrives just after the justices take the bench but while bar admissions are ongoing. He showed up at the court at about 3 a.m. but was initially relegated to the lawyers’ lounge, where bar members may listen to live audio of the arguments. He is upgraded to the last row of the bar section just before the arguments begin.

Amy Howe has this blog’s main report of the argument in Department of Homeland Security v. Regents of the University of California, which was alternately focused on the administrative-law wrinkles in the case and more sweeping sentiments about immigration law and policy.

Breyer engages Francisco at one point about “reliance interests,” not just for the estimated 700,000 recipients of DACA but also for countless groups and organizations that have filed amicus briefs on their side — although “countless” is not quite the word because Breyer and/or his law clerks have counted them.

Francisco patiently waits for a chance to dive in to answer a trademark lengthy Breyer question, interrupting the justice by muttering “Right” and “Uh-huh.” Finally he gets to answer, responding that then-Secretary of Homeland Security Kirstjen Nielsen, the author of one of the two key decision memos at issue, “explicitly considered the reliance interests, including all of the things that you just listed that were set forth in excruciating detail in the numerous district court decisions that have ruled against us.”

Francisco has a harder time interjecting an answer during a lengthy question — some might call it a speech — by Justice Sonia Sotomayor.

“I’ve always had some difficulty in understanding what’s wrong with an agency saying, we’re going to prioritize our removals, and for those people, like the DACA people who haven’t committed crimes, who are lawfully employed, who are paying taxes, who pose no threat to our security, and there’s a whole list of prerequisites, we’re not going to exercise our limited resources to try to get rid of those people,” she says. “I know you’re going to argue contrary to what I just said.”

Francisco is chomping at the bit to do so. “So I guess I have three responses, your Honor.”

But Sotomayor is not finished. “All right,” she says. “But let me just finish my question.”

She continues to talk about the Trump administration memos and reliance interests, concluding, “I think my colleagues have rightly pointed there’s a whole lot of reliance interests that weren’t looked at, including the … current president telling DACA-eligible people that they were safe under him and that he would find a way to keep them here. And so he hasn’t and, instead, he’s done this. And that, I think, has something to be considered before you rescind a policy.”

“Putting all of that aside, I’m going to get to my question,” Sotomayor adds, to laughter.

Chief Justice John Roberts interjects: “And maybe we’d have an opportunity to hear the three answers.” Sotomayor wraps up by asking where “is all of this really considered and weighed?”

Francisco says, “So, your Honor, four answers now. I think I’ve added one.”

He starts with a reference to Obama, and just as Sotomayor has declined to mention Trump by name, Francisco does the same with Trump’s predecessor.

“I think that the prior president didn’t, couldn’t, and hasn’t made any kind of promise that DACA would remain in effect in perpetuity because it would have been impossible to make that promise,” Francisco says. “In fact, every one of my friends on the other side, I think, has agreed that we could rescind DACA at any time if, at least in their view, we did provide a little bit more detailed of an explanation.”

“[A]ll that they seem to be saying is we have to write a few more words,” he says.

Arguing for the challengers, Olson and Mongan faced their own difficulties, including questions about whether the action is reviewable at all, a raft of thorny administrative law questions and suggestions from some justices that the Nielsen memorandum may have offered valid rationales for winding down DACA.

“What good would another five years of litigation over the adequacy of that explanation [in the Nielsen memorandum] serve?” asks Justice Neil Gorsuch.

Olson pivots toward a recent decision written by the member of the court who may hold the cards in this case, the chief justice.

“What they could have said is that we understand all of these people, working for all these people, we understand what people are going through, provide a reason[ed], rational explanation, to use the words of this court just a few months ago in the Census case, to explain those things, to explain why a policy is being changed and make a contemporaneous decision.”

After 80 minutes of argument, and more than a few words, the case is submitted.