Empirical SCOTUS: Is oral-argument talking time all it’s cut out to be? (UPDATED) 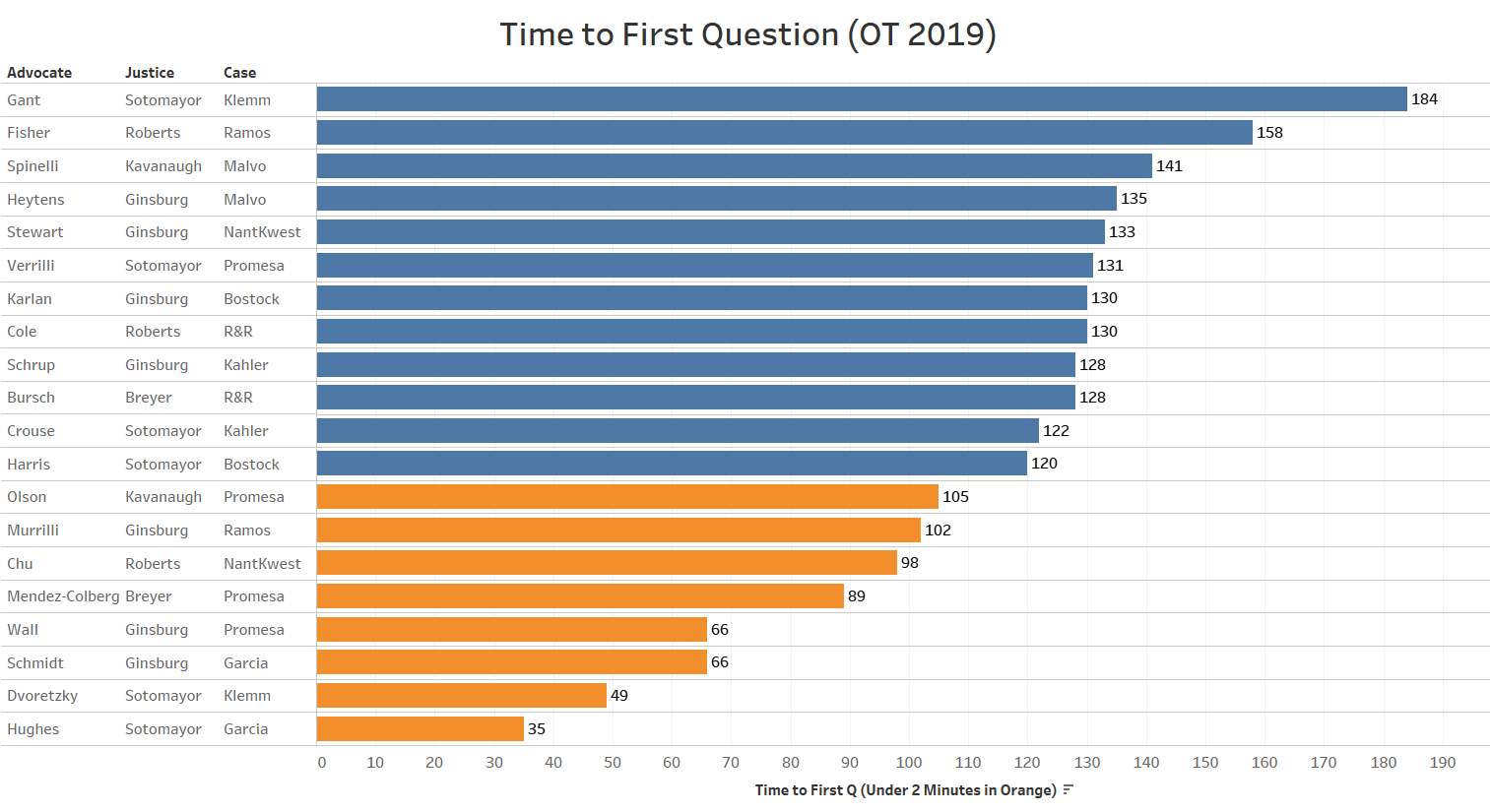 Supreme Court oral arguments are not entirely what they seem. Although at first blush they may appear to be an opportunity for attorneys to make their arguments directly to the justices, they often become occasions for the justices to test out their theories of a given case and to gauge other justices’ positions on given topics. That is one of the reasons why the justices almost always direct the flow and tenor of each argument.

Justice Stephen Breyer, for instance, is notorious for his lengthy mid-argument orations. Although attorneys still often speak more than individual justices in each argument, they generally have little time to expound on points they feel are important to the case unless these topics are of equal interest to one or more of the justices. Perhaps for this reason, new Supreme Court Guidelines state: “The Court generally will not question lead counsel for petitioners (or appellants) and respondents (or appellees) during the first two minutes of argument.” These two uninterrupted minutes of speech should give the attorneys an opportunity to make points that otherwise would be lost in the mix of the justices’ questions.

This has potential to be a drastic change from past practice. Last term, the attorney who had the shortest amount of time for opening remarks before a justice interjected was Michael Huston in Smith v. Berryhill. Huston spoke for 11 seconds before Justice Sonia Sotomayor jumped in with her first question. (Timing was measured from oral-argument recordings on Oyez.org.) This point in the transcript is shown below.

There were 33 instances last term in which a merits party’s counsel spoke for 30 seconds or less to open an argument before a justice began with questions. The average amount of speaking time for introductory remarks across the 2018 term was just over 54 seconds. Only five attorneys crossed the two-minute threshold during the term. The longest uninterrupted opening remarks were from Thomas Goldstein in Air & Liquid Systems v. Devries and Cecillia Wang in Nielsen v. Preap (Wang had the longest time to speak to open an argument, at 280 seconds.). 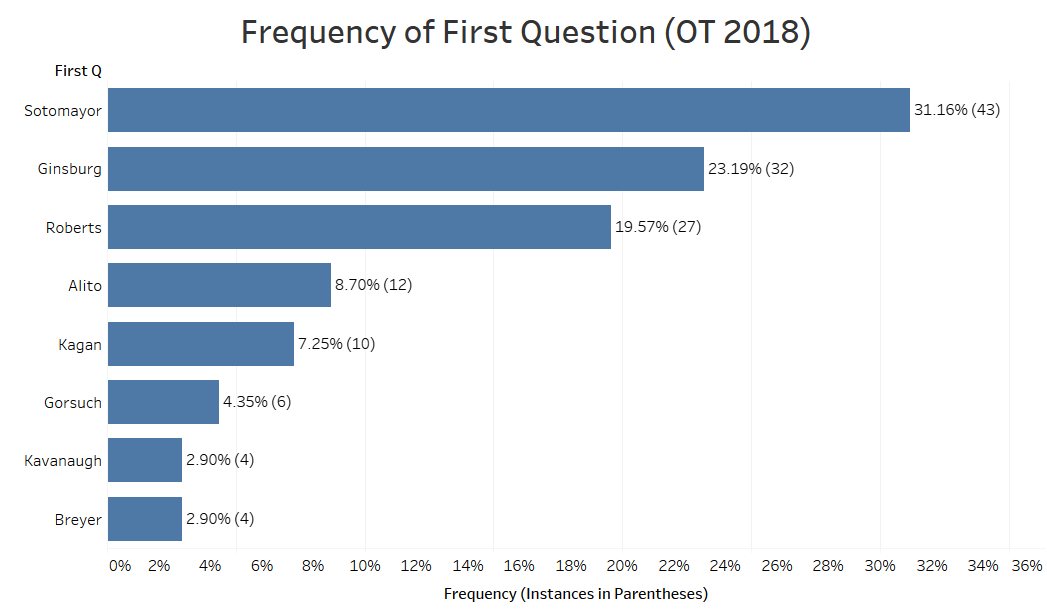 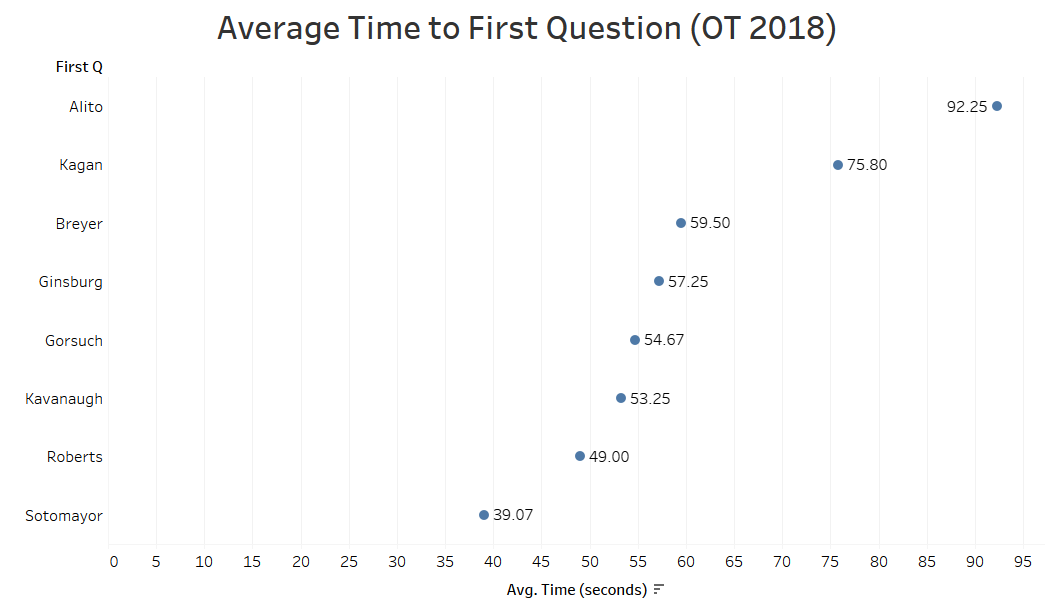 At 39 seconds, Sotomayor was almost 10 seconds quicker than Roberts, the second-fastest justice to the first question. On the other end of the spectrum, Justice Elena Kagan waited almost 76 seconds on average to ask her first question when she was the first questioner, and Justice Samuel Alito averaged over 92 seconds before he jumped in first. 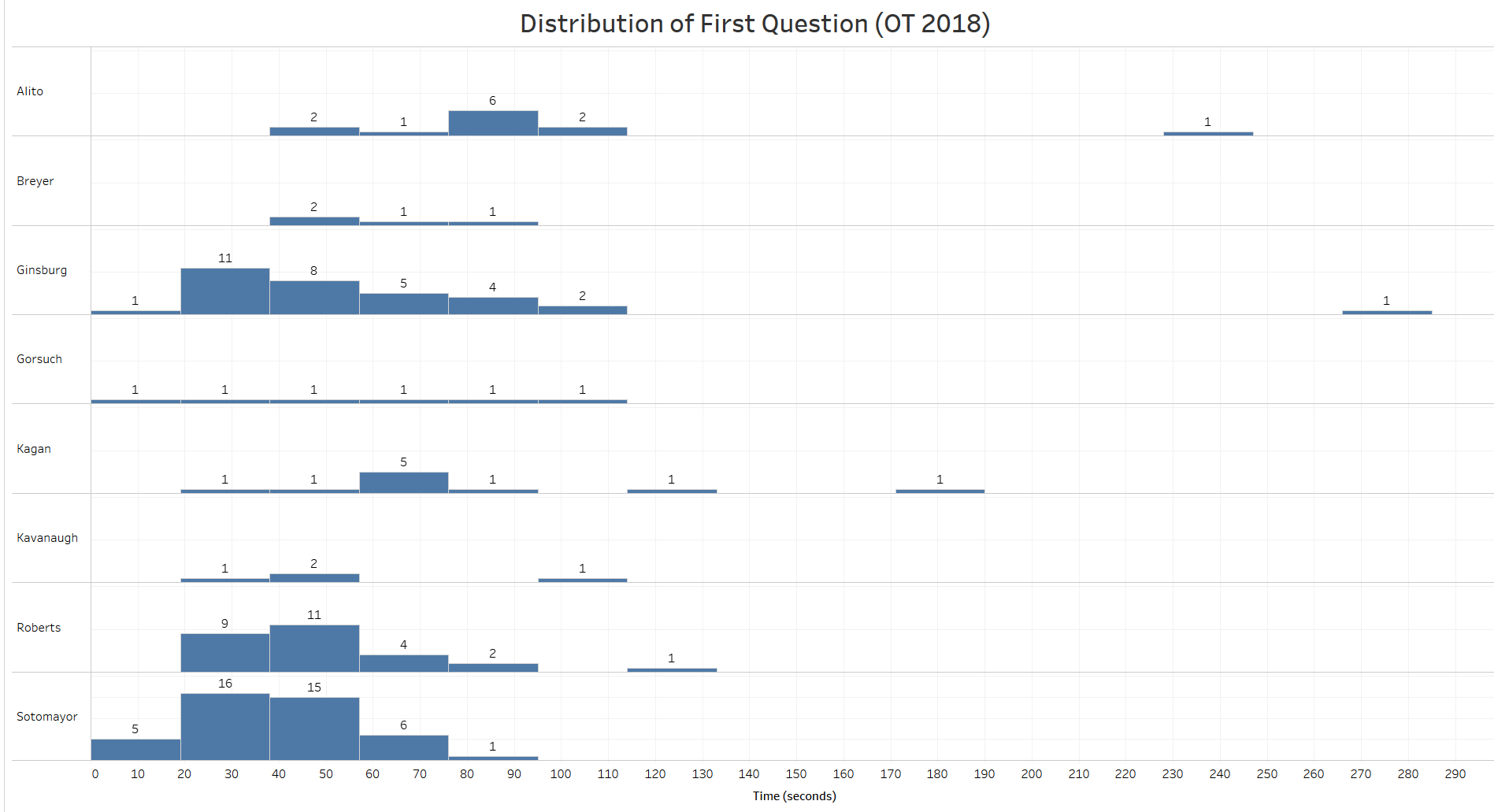 When we divide the advocates by sex, there are few noticeable differences in how the justices entered into the arguments. 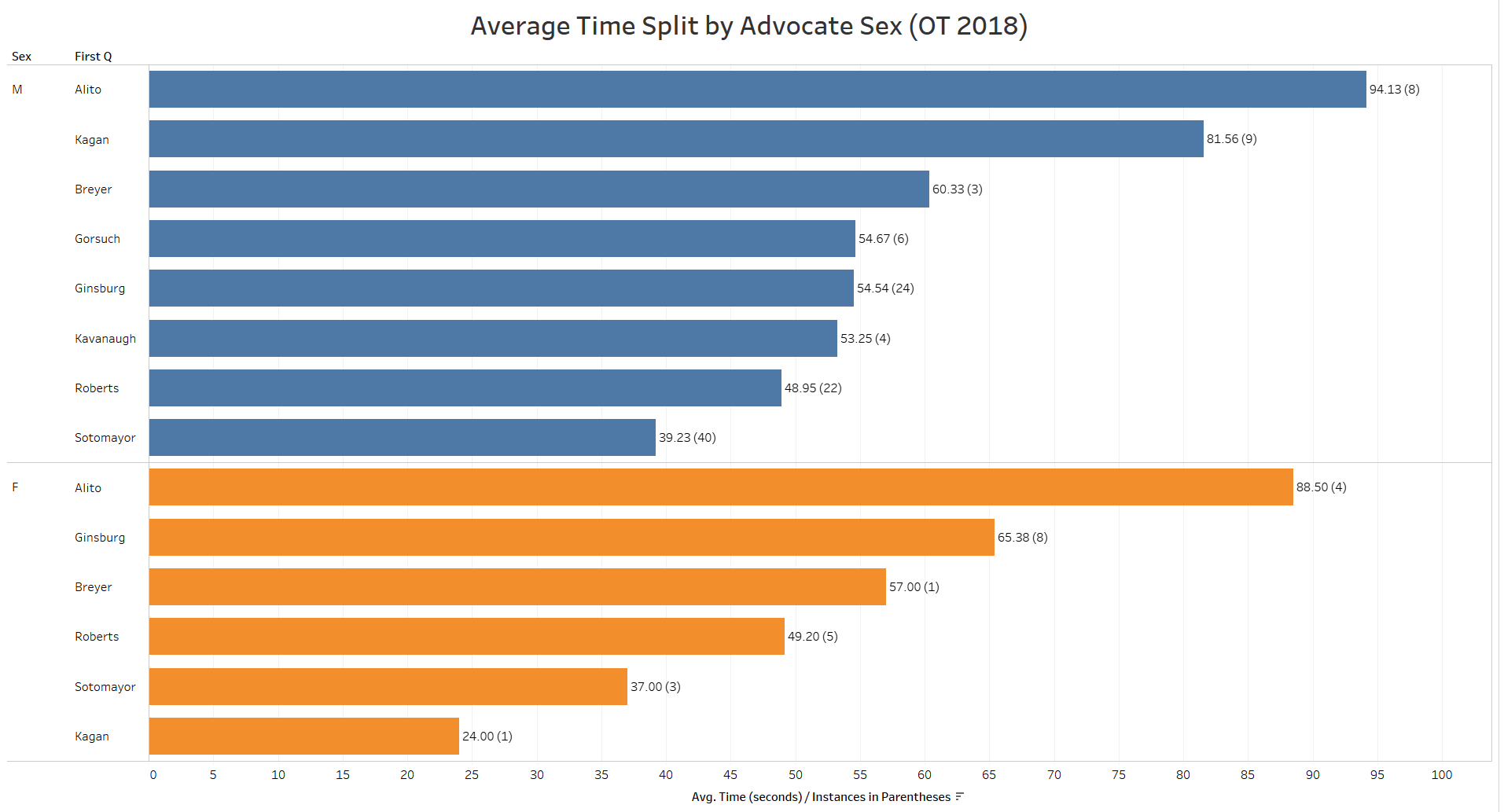 So far in 2019, the two-minute waiting principle has played out more as an aspiration than as a rule. 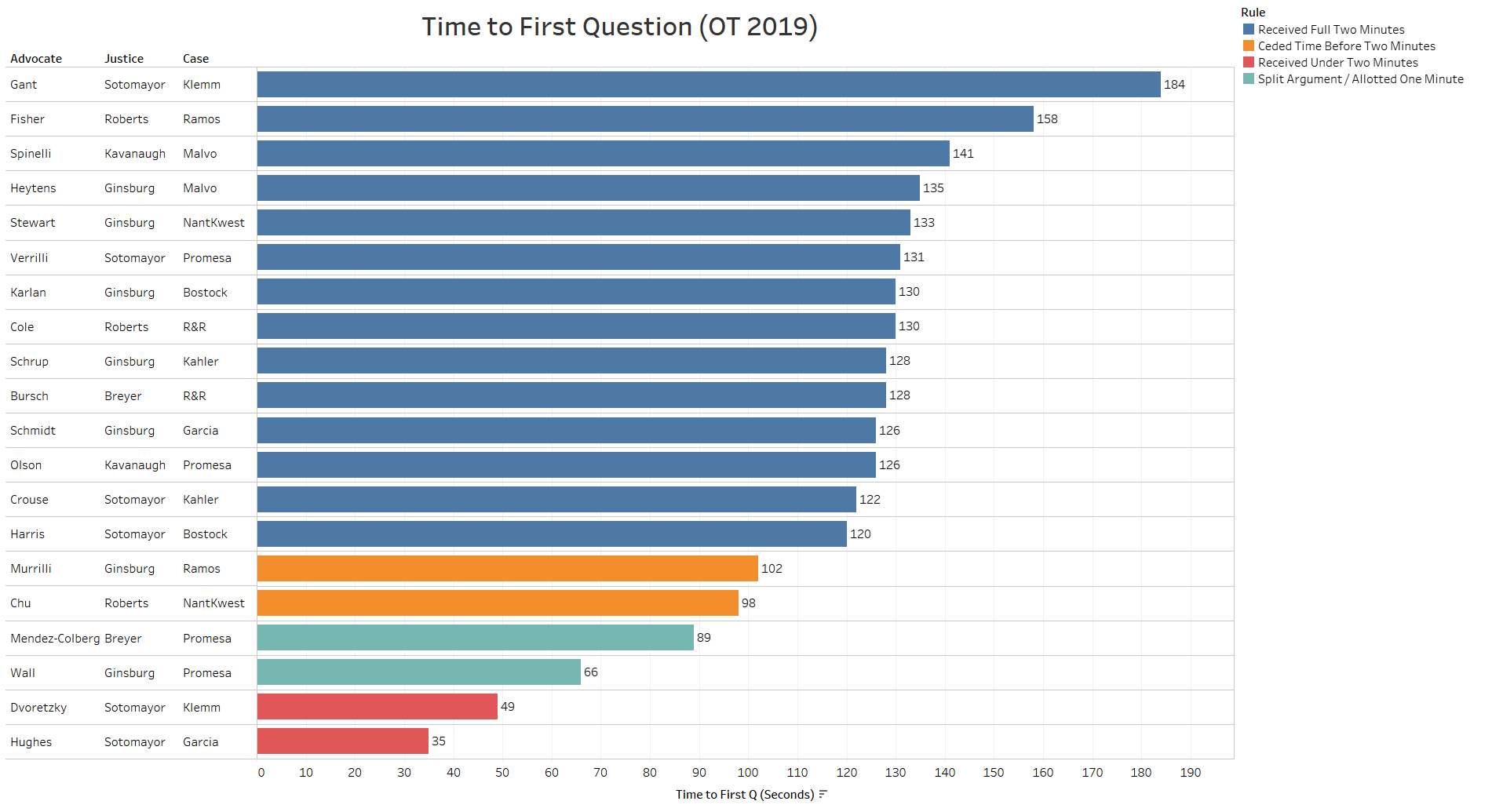 Sotomayor stymied advocates from reaching the two-minute marker in their opening remarks twice so far this term. Twice advocates did not make it to the two-minute marker on their own accords. Although the justices may seek to offer advocates more time to give uninterrupted remarks at the beginning of each argument, more work will need to be done before this intention becomes a consistent reality.

This post has been corrected to reflect accurate data for the number of arguments in which advocates did not speak uninterrupted for the entire opening portion allocated to them by a new Supreme Court guidance.