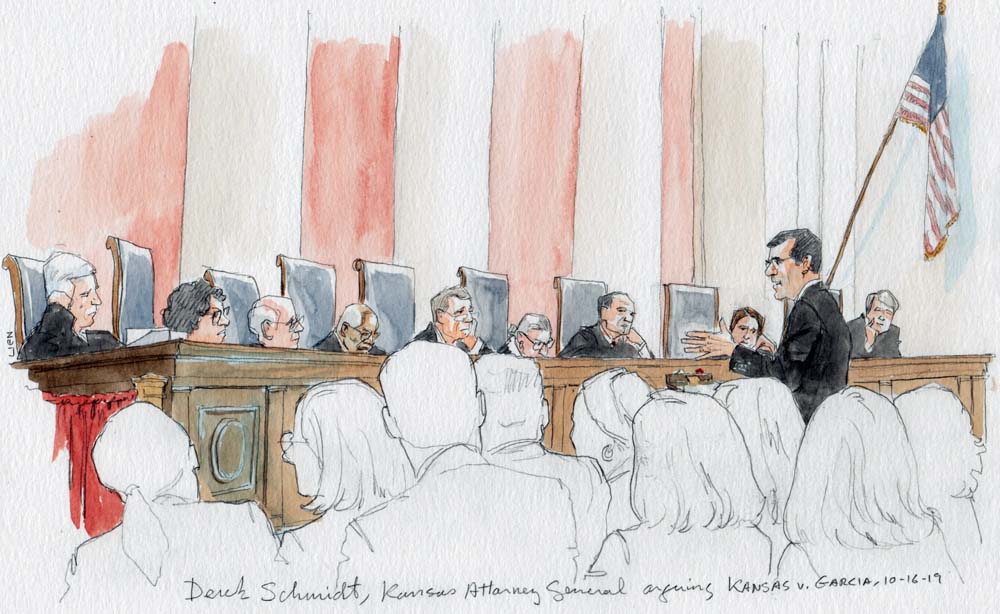 The Supreme Court heard oral argument yesterday in Kansas v. Garcia, which presents a potential conflict between state identity-theft prosecutions and federal immigration law. The justices must decide whether the federal Immigration Reform and Control Act preempts the state’s prosecution of unauthorized noncitizens who used stolen social security numbers to gain employment. After a lively hour of argument, during which all but the famously reticent Justice Clarence Thomas asked multiple questions, the fate of Kansas’ application of its identity theft laws to the noncitizen-defendants remains difficult to predict. Generally speaking, however, the court’s liberal wing seemed disposed towards finding the state prosecutions preempted, whereas Justices Neil Gorsuch, Brett Kavanaugh and Samuel Alito appeared skeptical of the noncitizens’ preemption arguments.

IRCA sets out the federal process for verification of work authorization – the completion of the I-9 form – that everyone seeking employment in the United States must satisfy. IRCA’s Section1324a(b)(5) provides that the I-9 form “and any information contained in, or appended” to it “may not be used for purposes other than for enforcement of” IRCA itself or specific federal crimes related to false statements, fraud, misuse of visas and other immigration documents, and perjury. In this case, Kansas prosecuted several noncitizens based on false identity information entered on federal and state tax-withholding documents (the W-4 and K-4 forms, respectively). Those tax forms contained the same identity information entered on the I-9, and were submitted contemporaneously with the I-9, as part of the employment process. In the opinion below, a majority of the Kansas Supreme Court agreed with the noncitizens’ claim that IRCA precluded the state from applying its identity-fraud statutes to them.

Kansas Attorney General Derek Schmidt defended the state prosecutions by suggesting that IRCA only preempted use of the I-9 itself, but not use of the same information on the tax forms. He immediately faced questions from Justice Ruth Bader Ginsburg, who noted that the tax forms were submitted with the I-9 as “one package” to procure employment. She noted that the state’s theory would allow for easy circumvention of IRCA’s preemption provision, because procuring employment is likely to involve the submission of identity information on forms other than the I-9. Kavanaugh and Justice Elena Kagan probed the same point, noting that tax forms almost always go together with I-9 forms, allowing the state to prosecute in every case despite IRCA’s proscription. In response, Schmidt argued that in enacting IRCA, Congress was only concerned with the then-novel use of the I-9 itself, and how employers might use the information in those forms.

Kagan then queried whether Arizona v. United States, the court’s 2012 case striking down several provisions of Arizona’s omnibus immigration-enforcement law, compelled the court to find that the state prosecutions are preempted. Specifically, Kagan described Arizona as having decided that states could “not prosecute unauthorized employees for seeking employment” and questioned whether Kansas’ position “eviscerates everything” the court said in that case. Schmidt resisted Kagan’s characterization, suggesting that, unlike Arizona, Kansas was vindicating a traditional state interest in addressing fraud, and that Kansas’ prosecutions were not “targeting folks because of their status.”

Next up, Assistant to the U.S. Solicitor General Christopher Michel argued as amicus curiae in support of Kansas. Almost immediately, Ginsburg homed in on the federal government’s seemingly diametric shift on IRCA’s preemptive scope, apparently referencing the Department of Justice’s pro-preemption arguments as the suing party in Arizona and as amicus in a 2016 case in the U.S. Court of Appeals for the 9th Circuit. Michel maintained that DOJ had not changed its position. Instead, he argued that DOJ’s prior position, that IRCA preempted state regulation of “work authorization,” was consistent with its current position that IRCA did not preempt state regulation of the “general requirements for obtaining a job,” which includes prosecutions based on information in tax forms. Justice Stephen Breyer, along with Sotomayor and Kagan, challenged that distinction, repeatedly suggesting that Michel’s position would allow Kansas to regulate virtually every instance of identity fraud in the employment process, effectively nullifying IRCA’s preemption provision.

Paul Hughes, representing the noncitizen, Garcia, attempted to persuade the justices that IRCA mandates preemption because Kansas’ theory of prosecution in this case depended on identity fraud to show work eligibility. The prosecution was based on Garcia’s bid to show he was authorized to be employed under federal law, so IRCA preempted the application of state law even though Kansas prosecutors ultimately used information from tax forms and not the I-9. Importantly, Hughes emphasized that Garcia’s “theory of preemption is a limited one,” which was triggered by the state prosecutor’s basing an element of the offense on the employment-authorization process.

In response to questions from Chief Justice John Roberts and Sotomayor, Hughes clarified that IRCA would not preempt application of the state law to identity fraud in obtaining drivers licenses, getting into college or applying for a credit card. Further, in response to a question from Alito, he agreed that IRCA likely would not preempt application of the state identity-fraud law if the state were to enact job requirements, like criminal background checks or proof of age, that entail provision of identity information. In that example, Hughes conceded, the state’s purpose in collecting identity information likely would not be related to verifying work authorization under federal law, and therefore state prosecution would not be precluded by IRCA, even if that identity information was also entered on the I-9.

After identifying the types of state prosecutions allowable under IRCA, Hughes faced a series of skeptical questions from Alito, Kavanaugh and Gorsuch. The three justices pressed him on whether his limiting principle – which depended on the state’s particular theory of prosecution – is tenable. Gorsuch, in particular, appeared wholly unconvinced. He seemed to find Hughes’ approach either impractical, because it turns at some level on Kansas’ particular reason for prosecuting, or trivial, because in the future Kansas would simply proffer another rationale unrelated to procuring employment (a “different set of magical words[,]” in Gorsuch’s formulation), for using information contained in tax forms. Vividly highlighting the latter critique, Gorsuch pointedly asked, “[S]o we are …deciding how many angels are dancing on the head of this pin?,” and queried whether the court should dismiss the case as improvidently granted. Hughes responded that when the facts suggest that a state is using information related to verifying work eligibility, Garcia’s preemption theory would have meaningful bite. In this particular case, he noted, the state could have pursued tax charges, but instead chose to prosecute identity fraud, resulting in a prosecution that looked exactly the same as a prosecution based on information in the I-9. Thus, IRCA preempted the application of Kansas law in this instance, and would continue to do so in similar situations.

Near the close of Hughes’ time, both Alito and Ginsburg asked him to clarify whether he was making an express or implied preemption argument. These questions were likely prompted by the Kansas Supreme Court ruling below. There, as explained in my argument preview, a five-justice majority split on the preemption doctrine animating its result, with four justices agreeing that 1324a(b)(5) was an “effective” express preemption provision, and one justice concurring on the basis that the state prosecutions were impliedly preempted. In response to Alito and Ginsburg, Hughes conceded that implied preemption was likely the “best way to look at this.” He invoked the Arizona majority’s use of field preemption to enjoin Arizona’s alien-registration scheme, arguing that Congress, with IRCA, similarly intended the federal government to maintain exclusive authority to prosecute fraud in the process of procuring work authorization.

At the end of the argument, the likely outcome remained unclear. The justices seemed equally troubled by how easily the state’s interpretation of IRCA could be circumvented to allow state prosecutions in nearly every instance as they were by Garcia’s theory of preemption, which depends on parsing the basis for the state’s use of identity information in its prosecutions. In the end, the decision will likely depend on whether the justices believe there is a meaningful difference between the work-authorization process and the attendant requirements for procuring a job more generally. To the extent the justices are persuaded by the distinction, Kansas will prevail. In contrast, if the justices understand the entire process of establishing work eligibility to include items such as tax documents submitted with the I-9, they will likely have to conclude that IRCA precludes these state prosecutions.