Introduction: The Roberts Court – One year after Kennedy’s retirement 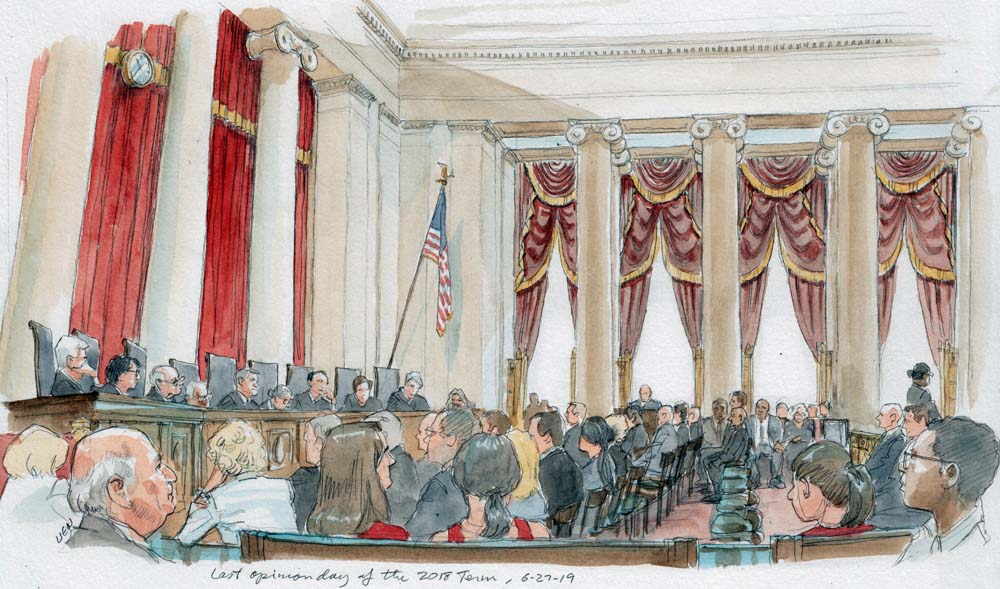 Speaking at the judicial conference of the U.S. Court of Appeals for the 2nd Circuit in June, Justice Ruth Bader Ginsburg told her audience that Justice Anthony Kennedy’s 2018 retirement was “the event of greatest consequence for the current Term, and perhaps for many Terms ahead.” Less than three weeks later, Ginsburg’s assessment proved accurate when the Supreme Court issued its ruling in a pair of cases involving allegations of partisan gerrymandering. Last year, with Kennedy still on the bench, the justices declined to reach the merits of two partisan-gerrymandering cases, or to say whether federal courts should play a role in reviewing partisan-gerrymandering claims at all. Instead, they sent those cases back to the lower courts. But with Kennedy replaced by Justice Brett Kavanaugh, a closely divided Supreme Court shut the door to partisan-gerrymandering claims altogether. 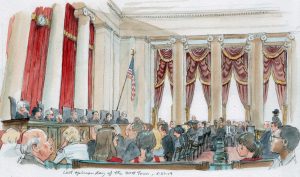 The Supreme Court’s decision on partisan gerrymandering was one of the most significant rulings of the term, along with its decision concluding that the Trump administration’s justification for including a question about citizenship on the 2020 census was a pretext. For the most part, the October Term 2018 was made up of lower-profile cases – indeed, there was some speculation that the justices were purposely trying to avoid controversial cases to stay out of the spotlight. But the justices did tackle contentious issues such as the death penalty, religion, abortion and immigration, and those issues are likely to confront the court again next term.

During the first few months of the term, it seemed that Kennedy’s retirement could lead to a shift in the court’s approach to death-penalty cases. In October, before Kavanaugh joined the court, the justices heard oral argument in the case of an Alabama inmate with dementia, who argued that executing him would violate the Constitution’s ban on cruel and unusual punishment. One month later, the justices – including Kavanaugh – heard the case of a Missouri inmate who suffers from a rare medical condition that causes blood-filled tumors to grow in his throat. The state’s plan to execute him by lethal injection, the inmate argued, could result in his choking to death on his own blood.

Chief Justice John Roberts joined the court’s four more liberal justices in a narrow ruling for Vernon Madison, the Alabama inmate. The majority sent the case back to the state courts for them to consider whether Madison’s dementia had left him so incompetent that he cannot be executed. But in an opinion by Justice Neil Gorsuch, a divided court rejected Russell Bucklew’s claim that executing him by lethal injection would be unconstitutional because it would cause him severe pain: Like other inmates challenging the method that the state planned to use to execute them, the court ruled, Bucklew needed to show that there was another method of execution that would reduce the risk of pain.

The justices will return to the death penalty again on October 7, when they hear oral argument on whether the Constitution allows a state to abolish an insanity defense. The question arises in the case of James Kraig Kahler, whose lawyers tell the court that he was convicted and sentenced to death for killing four members of his family “while suffering from depression so severe that he experienced extreme emotional disturbance, dissociating him from reality.”

In 2016, Kennedy provided the fifth vote to strike down a Texas law that (among other things) required doctors who perform abortions to have the right to admit patients at nearby hospitals. Less than three years later, the justices fielded a request from abortion providers in Louisiana to block the state from enforcing what they described as a virtually identical law. Roberts and the four liberal justices granted that request, putting the law on hold indefinitely; the justices will consider the providers’ petition for review in the fall.

In May, after considering the petition at 15 consecutive conferences, the justices weighed in again on issues relating to abortion – this time, an Indiana law that would require fetal remains to be cremated or buried and bar abortions based on race, sex or disability. The U.S. Court of Appeals for the 7th Circuit declared the law unconstitutional, but the Supreme Court gave the state a partial victory: In an unsigned opinion issued without oral argument, the Supreme Court allowed the state to enforce the fetal-remains provision, but left in place the part of the lower court’s ruling that struck down the ban on abortions based on the race, sex or disability of the fetus. The justices did not, however, act on another petition from Indiana – involving a challenge to a state law requiring a woman seeking an abortion to obtain an ultrasound at least 18 hours before the abortion – before they left for their summer recess.

October Term 2018 was a relatively quiet one for issues relating to religion. In June, by a vote of 7-2, the court ruled that the presence of a 40-foot cross, erected nearly a century ago as a memorial to soldiers killed during World War I, in a traffic circle outside Washington, D.C., does not violate the Constitution’s establishment clause, which bars the government from favoring one religion over another. But the ruling was fairly narrow, leaving many thornier issues about religious symbols on public property, and the court’s establishment clause jurisprudence more broadly, for another day.

One case involving religion is already on the court’s docket for next term. In Espinoza v. Montana Department of Revenue, the justices will consider a dispute over public funding for parents who send their children to religious schools. The Montana Supreme Court struck down a state law that authorized tax credits to provide scholarships for private schools, including religious schools; now the Supreme Court will review that ruling.

Shortly before Kennedy stepped down, the Supreme Court issued its decision in the case of Jack Phillips, a Colorado baker who, citing his religious beliefs, declined to make a custom wedding cake for a same-sex couple. In an opinion that Kennedy wrote for the court, the justices ruled for Phillips, but without reaching the merits of Phillips’ claim that requiring him to make a cake would violate his rights under the First Amendment. Instead, the court concluded, the Colorado administrative agency that had ruled against Phillips had treated him unfairly by being too hostile to his religious beliefs. But the question presented by Phillips’ case could return to the Supreme Court soon: In June, the Washington Supreme Court ruled against a florist who had refused to provide custom floral arrangements for a same-sex wedding. Attorneys for the florist, Barronelle Stutzman, have announced that they intend to petition the Supreme Court for review of that ruling.

Immigration will also be a hot topic in the upcoming term. Before leaving for their summer recess, the justices announced that they would weigh in on the Trump administration’s decision to end the “Deferred Action for Childhood Arrivals” program, known as DACA, which allows young adults who were brought to this country illegally as children to apply for protection from deportation. And other cases relating to immigration could arrive at the court soon, including challenges to the Trump administration’s new rules limiting the circumstances in which migrants can apply for asylum.

The Supreme Court is likely to issue many of its decisions in these high-profile cases in June of next year – right in the middle of the 2020 presidential campaign. If so, the Supreme Court could play a key role in the campaign, and its rulings may highlight the significance of even a single justice. This week SCOTUSblog will host a symposium looking at the Supreme Court after Kennedy’s retirement, with legal experts from both sides of the ideological spectrum weighing on some of these issues. We hope you enjoy the discussion!

Posted in Symposium on the Roberts Court after Kennedy, Plain English / Cases Made Simple