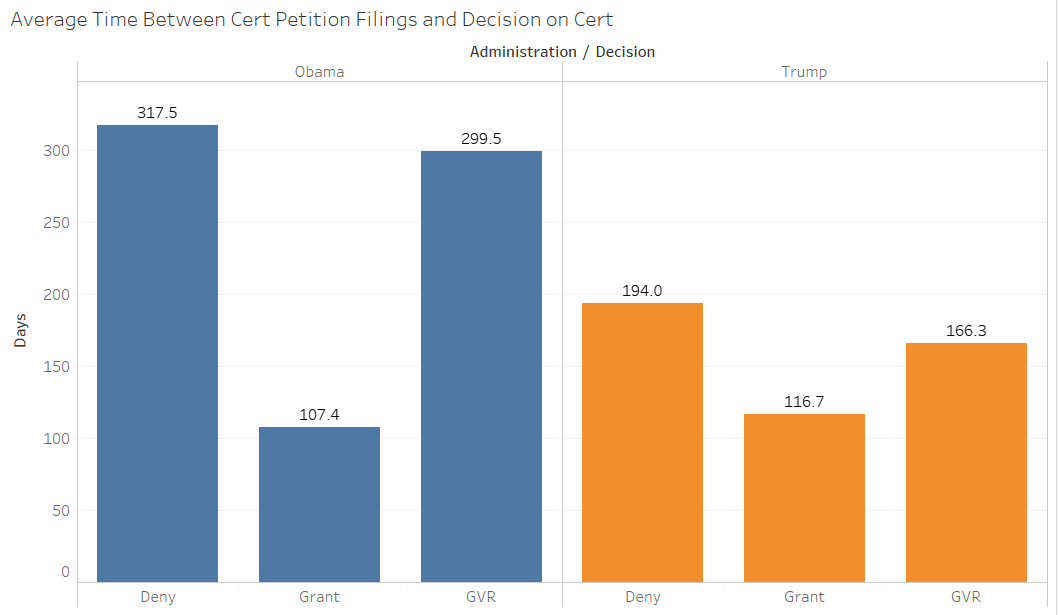 The Office of the Solicitor General (OSG) is involved in more Supreme Court litigation on a yearly basis than any other entity. The OSG also plays a unique role in this litigation because it provides the court with information, which is often related to the incumbent administration’s policy views. This singular position has been written about at length in various books and articles including Rebecca Salokar’s expansive 1994 work, “The Solicitor General: The Politics of Law.”

Empirical work on the OSG has revealed additional details about the relationship between the Supreme Court and the OSG. David Thompson and Melanie Wachtell’s 2009 article looking at the OSG’s certiorari petition procedures, for example, shows that when the court requested a response from the United States in October Term 2004, the likelihood of a cert grant rose from 0.9 percent to 8.6 percent. Empirical SCOTUS previously ran a piece that showcased the OSG’s participation at the Supreme Court in terms of number of filings and another that looked at various administrations’ OSG success in Supreme Court cases on the merits.

This piece examines various modes of OSG participation in the Supreme Court at the cert stage for a subset of cases from the OSG under President Barack Obama and the OSG under President Donald Trump. In the end, this shows that the court has responded differently at times to the two OSGs and presents possibilities for reconciling these differences, including divergent policy views and procedures.

The main source of data for these analyses is the OSG’s website, which houses a substantial number of the OSG’s Supreme Court filings from the past decade or so.

The OSG’s website contains 42 cert petitions from Trump’s OSG through the beginning of May 2019, including 10 still awaiting a response from the Supreme Court. Fifty-six petitions from Obama’s OSG were randomly selected as a comparison group. The first figure shows the different petition/case issue areas for these petitions as coded by the OSG on its own website. 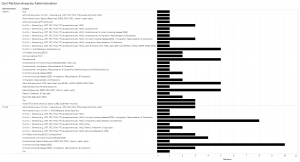 This figure shows some initial differences in focus of the two OSGs, as the Trump sample is weighted more heavily toward immigration and criminal/habeas cases. The OSG under Obama shows a bit more parity in terms of petition type, with a high relative number of filings in areas like labor and employment and natural resources.

How did these petitions fare? Even though the sample is smaller for the petitions from Trump’s OSG, below are some preliminary comparisons and results. The upper-level columns show the raw numbers of petitions while the lower level columns show the relative percentages for the two administrations’ OSGs. The abbreviation “GVR” – which stands for grant, vacate and remand — means the Supreme Court both grants the petition and sends it back to the lower court, generally for review based upon a new controlling decision. 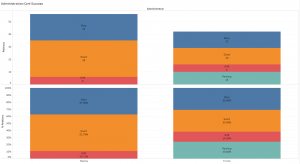 Another area of difference is in the time it took the Supreme Court to render a decision on the OSGs’ petitions. 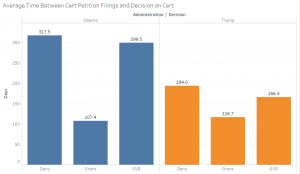 In a non-insignificant number of instances, the Supreme Court requests the OSG’s views on whether it should grant cert in a case. The procedure — known as calling for the views of the solicitor general or “CVSG” — conveys the trust the justices place in the OSG’s assessment of cases and whether they are proper for Supreme Court resolution. The OSG responds with a cert-stage amicus brief in such cases, generally recommending that the court either grant or deny the petition. The court’s subsequent responses, either according with or diverging from the recommendations of the OSG, further illustrate the proximity of the relationship between the OSG and the court at certain points in time. Amy Howe reviewed several of the recent CVSG responses from Trump’s OSG for SCOTUSblog. These did not make it into this analysis because the court has yet to come back with a decision on cert in these cases. 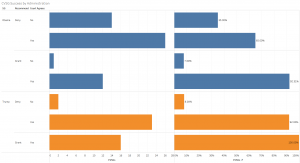 According to the invited-cert-stage-amicus-briefs section of the OSG’s website, by the middle of May 2019, the Supreme Court has yet to deny a petition that the OSG under Trump recommended the court grant after a CVSG. The OSG under Obama was also highly successful in this regard, with a 92-percent grant rate based on recommended grants. The results differed greatly when the two OSGs recommended that the court deny petitions. In such cases the court agreed with the assessment of Trump’s OSG 92 percent of the time, while it only agreed with Obama’s OSG 65 percent of the time. Without reading too much into this differential, it seems safe to say that the justices either agreed with the OSG under Trump more frequently (at least so far) or put greater faith in the recommendations of Trump’s OSG.

When we look at the CVSG filing-time differences between administrations’ OSGs and the Supreme Court’s subsequent decisions on cert, the differences are only slight. 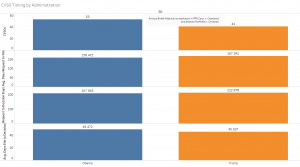 Two interesting points to note from these graphs are that the OSG under Trump took an average of about nine days longer to file CVSGs after a request from the Supreme Court than the OSG under Obama (level two of the figure). Secondly once the OSG’s amicus brief was filed, the court responded with a cert decision about four days faster for Trump’s OSG than it did for Obama’s OSG (level four of the figure).

A final way that the OSG participates in cert is by responding to cert petitions. Due to the large number of petitions in which the U.S. is listed as the respondent, the OSG does not immediately file responses in all cases and instead waives the right to respond in many. In a handful of cases in which the OSG waives a response, the court decides that a response from the OSG would be helpful and calls for a response (a process known as a “CFR”).

Another nuance of petitions is that indigents who cannot afford the Supreme Court’s filing fees can have the fees waived. Such petitions are known as “in forma pauperis” or “IFP” petitions. IFP petitions tend to have an appreciably lower success rate on cert than paid petitions.

Both administrations’ OSGs were successful in preventing cert in a large majority of these cases, although Obama’s OSG was a bit more successful overall. 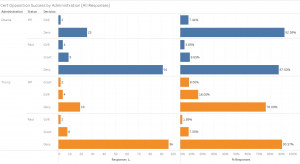 The Supreme Court denied cert in 92.6 percent of cases with IFP petitions for which Obama’s OSG filed a response. Note that many of these were based on responses to CFRs, which raise the likelihood of a grant. The court also denied 87.5 percent of paid petitions when Obama’s OSG filed a response. The court denied paid petitions at a similar rate for Trump’s OSG, at 90.57 percent. A greater percentage of IFP petitions were granted or GVRed after Trump’s OSG responded to the petitions, leaving the denial rate at 76 percent, or about 15 percent lower than that for Obama’s OSG.

When the CFR cases were isolated, one of the results was quite surprising. 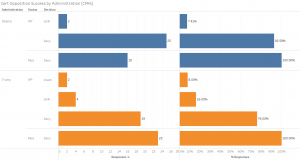 Out of the 16 paid cases with CFRs under Obama’s OSG and 23 paid cases with CFRs under Trump’s OSG, all petitions were denied. This inevitably relates to the sample of paid CFR responses drawn, but shows that a CFR in a paid case does not always enhance the likelihood of a grant, especially in recent years. Because all of the IFP filings in the overall responses were also in response to CFRs (the OSG website did not initially include IFP responses in the random sample selected) the numbers for IFP response are the same here as they are in the figure for all responses, as both show a higher deny rate for Obama’s OSG than for Trump’s OSG. Although there is no separate set of responses to IFP petitions without CFRs in this analysis, the OSG almost always waives the right to respond to IFP petitions and has historically had a very high rate of denials when it responds in IFP cases without CFRs.

Most of these statistics are surprisingly similar for Obama’s OSG and for Trump’s OSG. The most telling difference between the two is the Supreme Court’s responses to amicus briefs filed in response to CVSGs. The differences in the court’s adherence to recommendations from Trump’s OSG over Obama’s OSG, especially when Trump’s OSG recommended that the court deny cert, implies a higher level of trust for the current administration’s OSG. These rates will obviously fluctuate as Trump’s OSG weighs in on more petitions and so by the end of this administration’s time in office, we might well see differences from what we have today. At this point, however, this difference may illuminate a key distinction between the court’s relationship with Trump’s OSG and its relationship with Obama’s OSG.