Empirical SCOTUS: Is Kavanaugh as conservative as expected?

On Monday, April 1, 2019, the Supreme Court decided the case Bucklew v. Precythe, with the five conservative justices in the majority and the four liberals in dissent. To some, including legal scholar and CNN analyst Steve Vladeck, this ruling ushered in a new conservative court without the moderating anchor of Justice Anthony Kennedy. Going even further, Slate’s Mark Joseph Stern referred to the decision as “beyond appalling,” while Think Progress’ Ian Millhiser described it as “the most bloodthirsty and cruel death penalty opinion of the modern era.” This decision at the very least separates this nascent court like never before as, for the first time, the current justices divided along ideological lines in a highly divisive case dealing with civil liberties (The justices also split 5-4 along the same lines in the immigration detention case Nielsen v. Preap.).

By focusing on these decisions, along with some of his other rulings including his dissent in the abortion stay application June Medical v. Gee, Kavanaugh can easily be characterized as another justice on the far right who will inevitably push the Supreme Court into a conservative era perhaps like never seen before. Indeed, it would be surprising to find Kavanaugh on opposite sides of an abortion or death penalty decision from his conservative counterparts. That said, Kavanaugh’s first set of votes on the Supreme Court presents a picture that may (1) differentiate him from some of the other conservative justices and (2) help us understand where exactly he fits on the court’s ideological spectrum. This post uses data on current justices’ first sets of cases when they joined the Supreme Court to set a baseline for comparison to Kavanaugh’s votes thus far in the 2018-2019 term.

Justices prior to Kavanaugh

Justice Clarence Thomas, the longest-serving current justice, was in the court’s majority 22 times and in dissent four times in his first set of decisions in orally argued cases. (To track Kavanaugh the cap was set to 22 decisions, yet all decisions made on the same day as a justice’s 22nd day were incorporated into this analysis.) 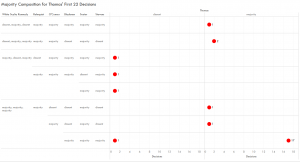 There were eight Supreme Court compositions in Thomas’ first set of decisions (Note that in these graphs when vote spaces are empty and without an intervening line, these votes are the same as the votes above until the next line is reached.). The court was unanimous in 17 out of the first 26 cases in which Thomas voted. Thomas voted most closely with Justice Antonin Scalia. The only case in which their votes were not the same was Dawson v. Delaware, in which Thomas was the lone dissenting justice. On the other end of the spectrum, Thomas and Justice Harry Blackmun voted in divergent directions in nine of these first 26 decisions, and Thomas and Justice John Paul Stevens came out on opposite sides in eight. Thomas’ early voting decisions already placed him toward the right edge of the court ideologically.

The next justice to join the Supreme Court was Justice Ruth Bader Ginsburg in 1993. Ginsburg is the only sitting justice who was in the majority in every one of the first set of cases she heard on the court. 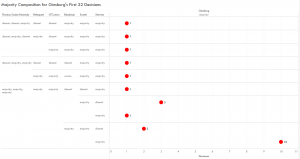 Fewer of Ginsburg’s first set of cases were decided by a unanimous Supreme Court than Thomas’, with 10. Also unlike Thomas, who had no 5-4 decisions in his first set of cases, Ginsburg had two. She authored the first, Ratzlaf v. United States, which dealt with criminal bank fraud. The majority in that case was ideologically mixed, with Stevens, Kennedy, Scalia and Justice David Souter joining Ginsburg. Kennedy authored the second, United States v. James Daniel Good Real Property, which examined forfeiture rules for property associated with criminal violations. Ginsburg was in the majority, along with Kennedy and the liberal justices Souter, Stevens and Blackmun.

Focusing on voting relationships, at one end of the spectrum Ginsburg voted in the opposite direction from two justices – Blackmun and Thomas — five times. Contrastingly, she was closest to Souter, who only voted once in the direction opposite to hers. These early pictures of Ginsburg’s and  Thomas’ voting behavior already begin to portend how they will decide cases, and which justices they will often side with, throughout their tenure on the court.

Fast-forwarding to 2005, we next look to Chief Justice John Roberts’ first set of decisions on the court. 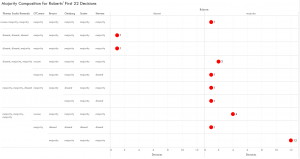 Roberts was in dissent twice and in the majority 23 times in his first 25 decisions. He voted on the same side as Scalia in each of these decisions. He voted in the direction opposite to Stevens’ most often, with five such instances. Roberts was also involved in two 5-4 decisions in his first set of cases. He was in the conservative majority for the first, Brown v. Sanders, an Eighth Amendment capital-punishment case, along with Scalia, Justice Sandra Day O’Connor, Kennedy and Thomas. Roberts was in dissent in the other case, Central Va. Community College v. Katz, which looked at sovereign immunity as a defense in bankruptcy proceedings, joining conservatives Scalia, Thomas and Kennedy. These decisions early in Roberts’ career on the Supreme Court already aligned him with the more conservative justices and placed him in opposition to the court’s liberals.

Now focusing on President Donald Trump’s nominees to the Supreme Court, the timing of Justice Neil Gorsuch’s nomination differed a bit from the other justices previously described, as he began his career on the court toward the end of a term rather than at the beginning. 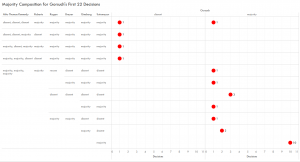 Gorsuch dissented four times in this set of decisions and he was in the majority on 20 occasions. At both ends of the spectrum, he voted on the opposite side from liberal Justices Stephen Breyer and Sonia Sotomayor eight times, and he was only once on the opposite side of a vote from Thomas. Because Gorsuch began his work on the court toward the end of the 2016-2017 term, and the court tends to decide its more contentious cases near the end of its terms, his first set of decisions involved more 5-4 votes than the first sets of any of the other justices, with five. From the 2016-2017 term, he was in dissent in McWilliams v. Dunn along with conservatives Justice Samuel Alito, Roberts and Thomas. In the second 5-4 decision he was in a conservative majority along with Kennedy, Roberts, Alito and Thomas in California Public Employees’ Retirement System v. ANZ Securities, Inc. The majority composition was the same for the court’s 5-4 decision in Davila v. Davis. At the beginning of the 2017-2018 term, Gorsuch was in dissent in Artis v. District of Columbia along with conservatives Thomas, Alito and Kennedy, and he authored the majority opinion in Murphy v. Smith, which was joined by Roberts, Alito, Thomas and Kennedy. In Gorsuch’s case, we can see his conservative contours taking shape with this early set of decisions.

Kavanaugh’s first set of decisions places him to the right of the Supreme Court, but he doesn’t align with the right to the same degree as some of his more senior colleagues on the court. 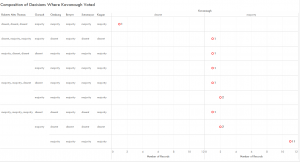 As previously mentioned, Kavanaugh has participated in two 5-4 decisions thus far. In both Nielsen and Bucklew, the Supreme Court split along ideological lines with Roberts, Alito, Thomas, Gorsuch and Kavanaugh in the majority, and Justices Elena Kagan, Ginsburg, Sotomayor and Breyer in dissent. These decisions also show the potential for a strong conservative majority when all five of the conservative justices’ views are aligned.

To examine Kavanaugh’s voting alignments at a more granular level, we can look at his agreement levels with each of the individual justices. The justices are split into the liberal and conservative sets. The figures show when Kavanaugh was in the majority or dissent on the X-axis, and when each of the other justices was in the majority and dissent on the Y-axis. The justices’ votes are aligned when they are both in majority or dissent (quadrants four and two), and they are not aligned when one is in majority and the other is in dissent (quadrants one and three).

These percentages of association with the liberal justices become even more meaningful when compared with the same figures for the conservative justices.

Although Kavanaugh is perhaps a milder conservative than expected at this point in the 2018-2019 term, he sided with the conservatives in the two cases in which his vote made the biggest difference – Bucklew v. Precythe and Nielsen v. Preap. It will not be surprising to see Kavanaugh side with the conservatives in these highly contentious cases, but it will be interesting to see if Kavanaugh and Roberts (whose possible shift to a more moderate position on the court was discussed in a recent post) make up the more moderate end of the conservative spectrum, with Gorsuch, Alito and Thomas more toward the edge of the continuum.

Voting composition figures for the remaining justices’ first set of votes can be found below. 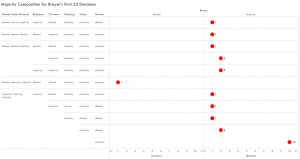 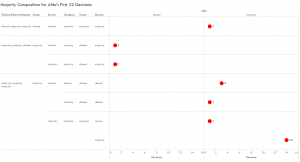 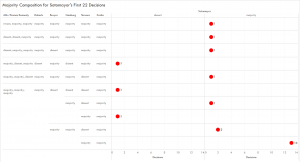 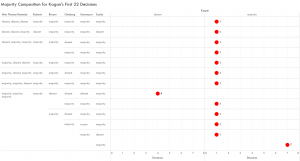