Argument analysis: The familiar yet fresh debate in Franchise Tax Board of California v. Hyatt 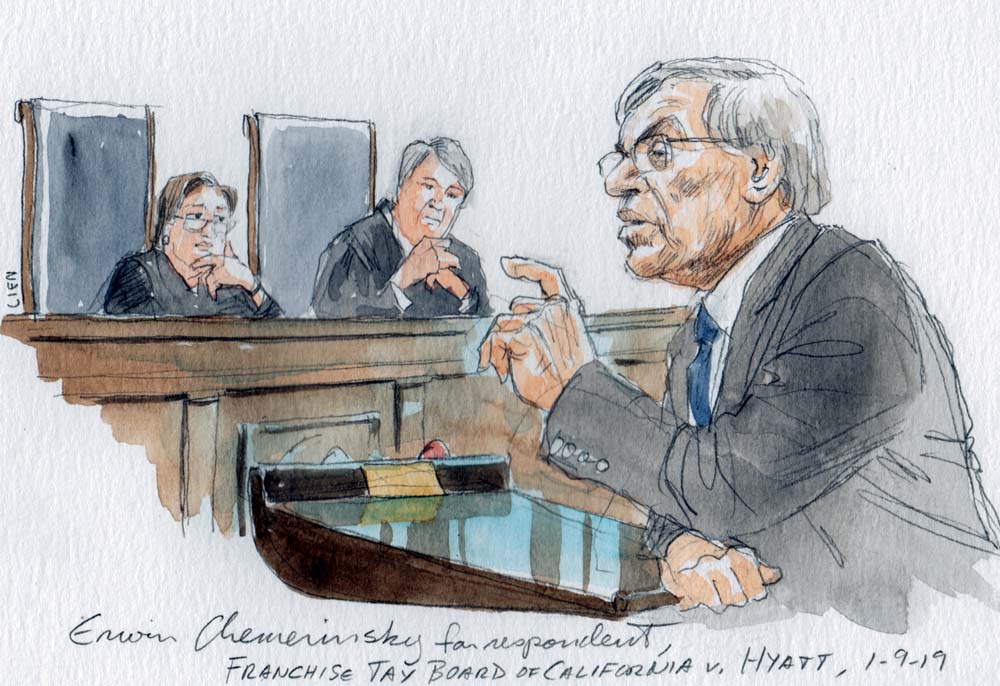 Federal courts aficionados have been looking forward to the oral argument in Franchise Tax Board of California v. Hyatt, and the event did not disappoint. The question was whether to overrule the decades-old precedent Nevada v. Hall, which held that states lack sovereign immunity in one another’s courts. The argument largely broke down according to familiar ideological lines, but the discussion still had verve and creativity, in part thanks to the performances of veteran advocates Seth Waxman and Erwin Chemerinsky. The justices’ engagement may also reflect that this case has become a repeat visitor at the Supreme Court. For example, Justice Stephen Breyer noted that he was so familiar with the relevant historical sources “because we had this case before.” 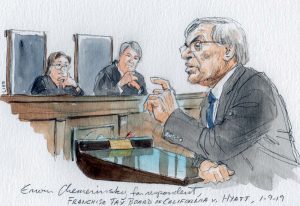 Representing the board, Waxman painted a vivid historical picture. Before the Constitution, the states regarded each other as separate sovereigns who were bound by principles of international law but still imbued with the “raw power” to engage in reprisals. Then the Constitution created a “more perfect Union” in which the states no longer relied on the “wild west of international law.” In particular the states obtained the benefit of sovereign immunity in one another’s courts — which is just the principle that the board needs to prevail in this case. But several justices were skeptical of Waxman’s pat historical account. Justice Sonia Sotomayor led off by asking what constitutional text supported the board’s position, and Breyer soon sparred with Waxman over a series of founding-era cases.

In a comment that may have been partly sarcastic, Justice Samuel Alito noted that “we are all always very vigilant not to read things into the Constitution that can’t be found in the text” and then reiterated Sotomayor’s question about the source of state sovereign immunity. Justice Brett Kavanaugh soon joined in, asking why something that the states supposedly regarded as so important would not have been addressed in the constitutional text. Waxman responded in part by rattling off doctrinal rules based on the Constitution’s structure, without express textual foundation. Chemerinsky, Gilbert Hyatt’s counsel, later countered that when the Constitution aimed to “limit state power, it did so explicitly,” as suggested by the 10th Amendment.

Justice Elena Kagan was alone among the justices in referring to the friend-of-the-court brief filed by Professors William Baude and Stephen Sachs, but she brought it up repeatedly and for an interesting reason. Baude and Sachs essentially agree with Hyatt that Hall was rightly decided, but they couple that conclusion with a claim that Hyatt’s Nevada-court victory should probably be unenforceable in any other states’ courts because of principles traceable to the 19th-century law of judgments. Rather than endorse either half of the Baude-Sachs account, Kagan raised their view as an alternative to the historical narrative that the board put forward. Whereas the board argued that states benefited from the Constitution by obtaining a new sovereign immunity in each other’s courts, Baude and Sachs contend that the states retained their authority not to implement one another’s judgements when those judgments transgress certain international standards. According to Kagan, both of those accounts “are just hypotheses. And what’s the evidence for any of them?” That line of argument allowed Kagan to take advantage of the Baude-Sachs argument while ultimately supporting current practice and meaningful relief for Hyatt.

When he took the podium, Chemerinsky quickly emphasized the historical principles of interstate comity that had helped slash the damages award in Hyatt’s own case. Comity, Chemerinsky argued, offered an alternative way to protect states from abusive litigation. But Sotomayor responded, “I just don’t see comity being enough,” and then pointed to principles of personal jurisdiction as additional help. Later, Chemerinsky noted that the Supreme Court had already created another protection in ruling against Hyatt: During this case’s second trip to the justices, the Supreme Court held that “damages would be limited to the amount that the forum state would be liable.” Breyer also suggested a type of self-help short of physical conflict: If one state started to permit abusive suits, other states might “all start suing” the abusive state, whose “attitude would change.”

Alito eventually posed the basic intuitive challenge that Hyatt confronts: Is it really “plausible that there would be great concern about a state’s being sued in a federal court, which is a more neutral tribunal, but no concern about a state being sued in … the courts of another state?” Chemerinsky answered yes, both because the Framers were focused on potential abuse by the new federal government and because the founding-era states “didn’t want to give up their own power.” But Alito did not seem to agree. And the court has relied on similar intuitions when ruling in favor of state sovereign immunity.

In a more lighthearted exchange, Alito wondered what it would be like “if we had the California republic, which is something some people in California would like.” Alito suggested that if California “overwhelms” Nevada “in every respect,” then state sovereign immunity should play a critical role in protecting the weaker state. Chemerinsky responded that there is in fact a power disparity between the states and that the problem does not actually arise with great frequency.

The argument also featured an interesting debate about what to make of the friend-of-the-court briefs filed by a great majority of states. Waxman pointed out that, all told, 47 states had expressed support for overruling Hall. That impressive display suggests that states generally have use for immunity in one another’s courts. But Sotomayor asked why all those states didn’t simply “move to get the Constitution amended”? The result would be a popular repudiation of Hall somewhat like the 11th Amendment’s repudiation of the 1793 decision Chisholm v. Georgia. Waxman responded that “[o]ur Constitution is not amended lightly” and that similar arguments could have been made against the court’s other structural holdings.

Later, Chemerinsky doubted that “you can equate a brief filed by state attorney generals with the position of state governments,” including the states’ judiciaries and legislatures. And he further suggested that the attorneys general simply “don’t want to have to defend suits” that immunity might block. Chief Justice John Roberts bristled at that idea, saying: “It’s a pretty remarkable assertion that we shouldn’t understand representations of the states’ attorneys general to represent the views of the state.”

Of course, the justices debated the role of stare decisis. Breyer intriguingly suggested that courts’ fidelity to precedent enables lawyers to counsel their clients to obey the law. Otherwise, a client might point to the possibility of a future overruling as a basis for transgressing current legal principles. The upshot is that, “every time we overrule a case, it’s like a little chink in an armor.” In response, Alito asked if the best way to foster public respect for the law is for the court to acknowledge when it has made a “big mistake” and “correct it,” rather than clinging to an old, admitted error.

Kavanaugh was perhaps the most focused on exploring the proper basis for overcoming stare decisis in this case. Early on, Kavanaugh asked if it mattered that the court’s opinion in Hall rested on reasoning inconsistent with later precedents. After all, then-Justice William Rehnquist had dissented in Hall before becoming chief justice and eventually leading the court to expand state sovereign immunity.

In a separate exchange, Chemerinsky suggested that stare decisis required the court to ask, “Is there anything today that’s before the court that it didn’t have when the earlier case was decided?” Kavanaugh was skeptical. In his view, strict adherence to that changed-circumstances principle would have prevented many past overrulings. Instead, Kavanaugh suggested, overruling is proper when a precedent is “egregiously wrong,” has “severe practical consequences,” and generates “no reliance.” Of course, Chemerinsky had already disputed that each of those qualities applied to Hall.

The briefing had exposed several procedural hurdles that might have obstructed the court’s consideration of the sovereign immunity issue, but the justices seemed uninterested in them. Chemerinsky mentioned his law-of-the-case argument a few times, including in the conclusion of his argument. But no justices engaged. And Baude and Sachs’s 11th Amendment concerns likewise went unmentioned.

The argument was lively even though only six justices actively participated. Justice Ruth Bader Ginsburg was absent due to her ongoing medical recovery, and Justice Clarence Thomas was silent in accordance with his custom. Interestingly, Justice Neil Gorsuch also asked no questions, and that choice may reflect the start of a pattern. Last year, Gorsuch was silent in another case that involved a request to overrule precedent — namely, Janus v. American Federation of State, County, and Municipal Employees, Council 31. In Janus, Gorsuch ultimately joined the other conservative justices to overrule a precedent in a 5-4 vote. This case may be headed in a similar direction.