Empirical SCOTUS: With a little help from academic scholarship 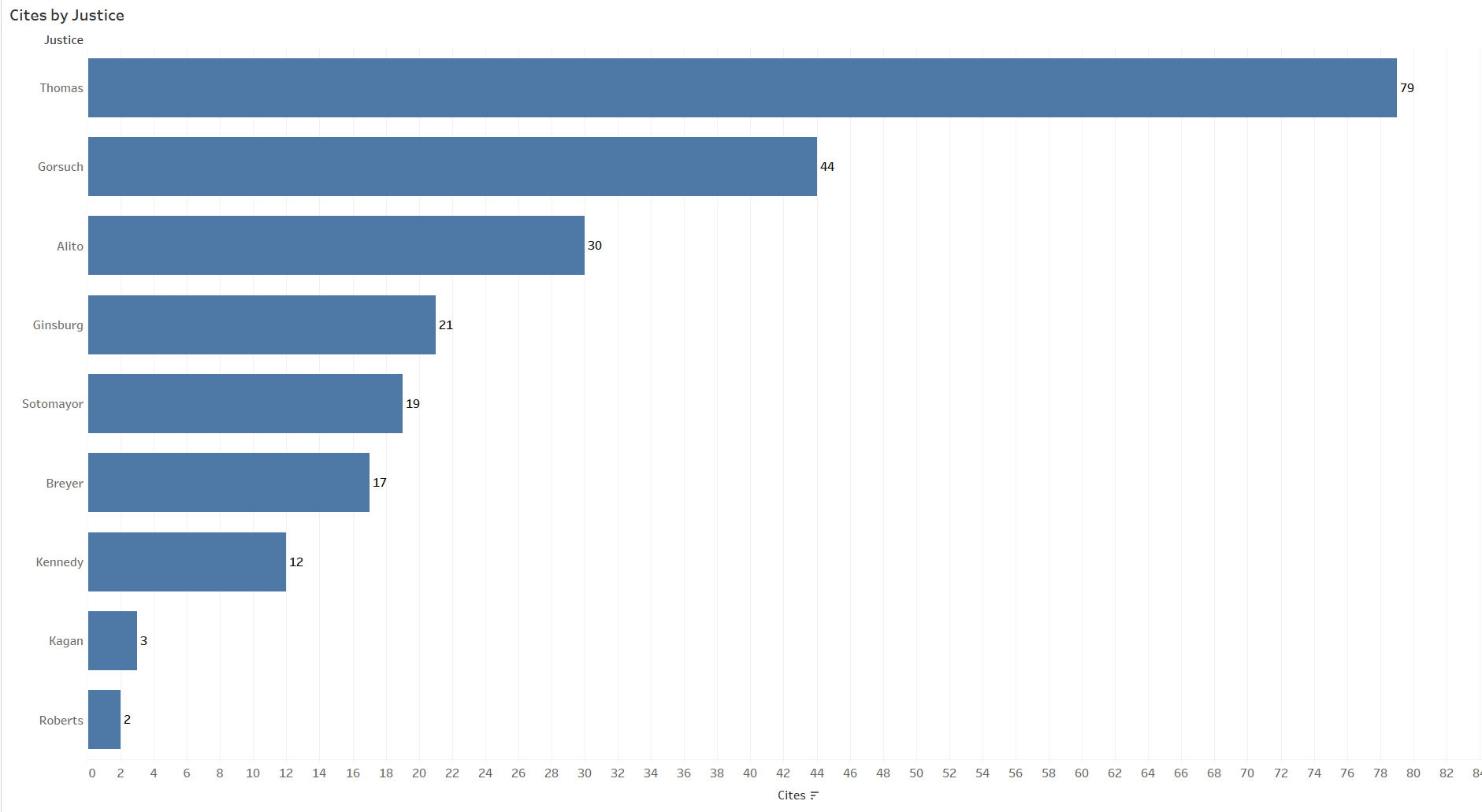 Judges’ citations tell a lot about their dispositions. We can glean relationships between cases, judges’ perspectives on these cases and judges’ relationships with other judges based on case citations. For this reason, empirical scholars have spent much time and energy analyzing judges’ citation patterns. A slew of Supreme Court researchers have written fascinating pieces about the justices’ case citations (Two of the many are from Fowler et al. (2007) and Cross et al. (2010).).

To locate academic articles, all citations including those to cases were captured. Cases and other non-article related material such as legislation and books were removed. This left a dataset of journal articles that could then be filled in with accompanying information such as the authors of these articles.

The hope and expectation are that the current dataset uniquely identifies all articles cited by the justices in specific opinions so that each unique observation is based on a justice’s citation to an article in a given opinion. If the same justice cites the same article twice it is counted only once, but if two different justices cite the same piece in separate opinions in the same case, the cited article is counted twice. The post includes a total of 227 article-opinion observations.

The justices have several audiences that are interested in the Supreme Court’s dispositions. Political scientist Lawrence Baum authored a book called “Judges and their Audiences” that provides a powerful analysis of these relationships. These relationships are particularly important when considering why justices cite academic articles, as it becomes apparent that the relationship likely moves in both directions. The justices cite articles to support and defend their propositions, but they also potentially do so because they know that the legal academic elite read their opinions and this audience values these citations.

There is a wealth of information in this dataset even with only two terms’ worth of data. One finding is that although the court cites journal articles quite heavily in some opinions, this practice varies considerably by case. Below is a chart of the cases from the 2016 and 2017 terms in which justices cited more than two journal articles. 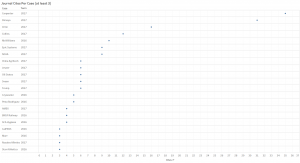 As you can see, there is a significant drop-off from the 35 observations in Carpenter v. U.S. and 31 in Sessions v. Dimaya to the 16 in Ortiz v. U.S. and 12 in Collins v. Virginia (Notice also that all four of these cases with the most citations to journal articles were heard during the 2017 term.).

The 227 observations were hardly evenly distributed among the justices, as the next chart shows: 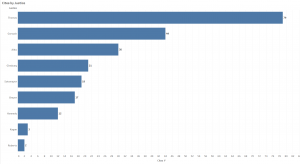 Justices Clarence Thomas and Neil Gorsuch were much more likely to cite journal articles than their colleagues on the court, as Thomas had by far the most such cites and Gorsuch had all of his cites in a little over one term. Thomas cited the majority of these articles in his dissenting opinions; 39 of his citations came in dissent compared to 33 in concurrence, and only 7 in majority opinions. Gorsuch on the other hand mainly cited articles in his concurrences with 23, compared to 19 in dissent and only two in the majority. Justice Samuel Alito also differed substantially in the types of opinions in which he cited articles, citing 23 articles in dissent, with only five such cites in majority opinions and two in concurrences. 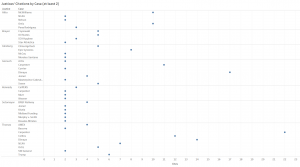 Not surprisingly, Thomas had the most citations for any justice-case with his 22 in Carpenter. Gorsuch had the next most with 17 in Dimaya. Overall there were 39 instances when a justice cited more than one journal article.

Looking at this practice from another angle, we can see that the justices tended to cite elite law reviews most frequently, although they cited a wide variety of law journals across all opinions. 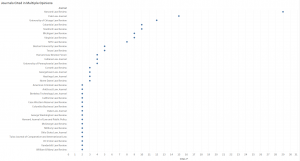 Over the past two terms the justices cited Harvard Law Review in 29 opinion-observations. Yale Law Journal was cited next most often with 15 cites, followed by University of Chicago Law Review with 12. Several journals outside of schools’ flagship law reviews received multiple cites, including the online Harvard Law Review Forum, the American Criminal Law Review and the Antitrust Law Journal.

Justices also had their predilections for particular journals during these two terms, or at least they tended to cite articles from some journals and not others. Justices with multiple opinion-cites to specific journals are shown below. 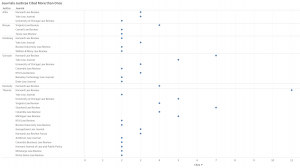 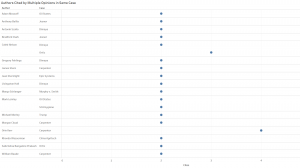 Fourth Amendment scholar Orin Kerr, a former Kennedy clerk, had four cites in Carpenter alone as the justices cited four different articles that Kerr wrote. In that case Thomas cited two of Kerr’s articles while both Gorsuch and Kennedy cited one. The only other author with more than two observations from the same case was Caleb Nelson, a former Thomas clerk, with three cites in Ortiz. 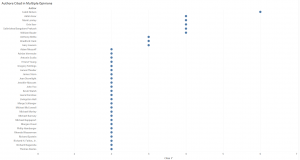 These data can also be parsed by the schools where the various authors teach (note several authors are deceased or no longer in academia while other authors are practitioners rather than academics). 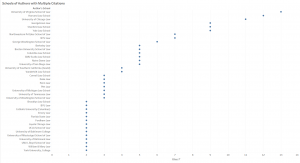 Professors at the University of Virginia were cited in the most observations with 13. Most of these cites were driven by UVA professors Caleb Nelson and Saikrishna Bangalore Prakash, who was cited in four observations (twice by Thomas and twice by Alito). The justices cited an assortment of Harvard Law professors, who accumulated 12 opinion-cites, with only one professor, Adrian Vermeule, cited in more than one observation. Following Harvard Law, University of Chicago Law’s faculty tallied 11 opinion cites, while faculty from Georgetown Law, Stanford Law and Yale Law each accumulated nine opinion-cites. 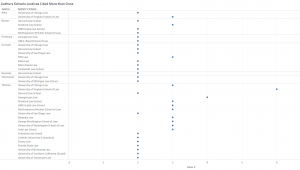 Overall, citations to journal articles from the past two terms tell us several important factors about the relationship between the justices and academia. First, the justices prefer articles from elite institutions’ law reviews. This relationship is quite logical as law reviews vie to publish top authors and top authors vie to have their articles published in top journals. It should be heartening for other authors to notice the diversity of journals cited, though, as even journals outside of the top tier made their way into multiple opinions.

Second, certain justices tend to cite journal articles more frequently and do so in particular cases and in particular opinion types. This is exemplified by Thomas’ many journal cites in his dissent in Carpenter.

Third, particular experts’ articles are tracked more closely than those from other authors. Indeed, there are even citation relationships between justices and their former clerks. The justices and their current clerks have a finite amount of time to write opinions and so inevitably they do not equally divide their time among all articles on their radar. This is also evident in the large number of cites to Orin Kerr, Mark Lemley, Caleb Nelson and others.

Finally, certain institutions have become more successful in recruiting faculty whom the justices cite most frequently. University of Virginia Law is notable in this respect as its faculty members were cited more often than those from higher ranked schools such as Harvard and Yale. Georgetown is another good example of a school whose faculty were cited more frequently than those from several other schools that precede it in school rankings. Ultimately the justices cited authors from many institutions, both elite and otherwise, and this is a testament to strong legal faculty across the country. Patterns in these analyses help to illustrate certain justices’ preferences as well as how they and their clerks expend their research time and energy. Clearly, they spend much of their time scouring journal articles when they are not busy analyzing and dissecting cases. Journal articles are a prominent part of the court’s modern jurisprudence and so the importance they play in the trajectory of the law should not go unnoticed or be underappreciated.