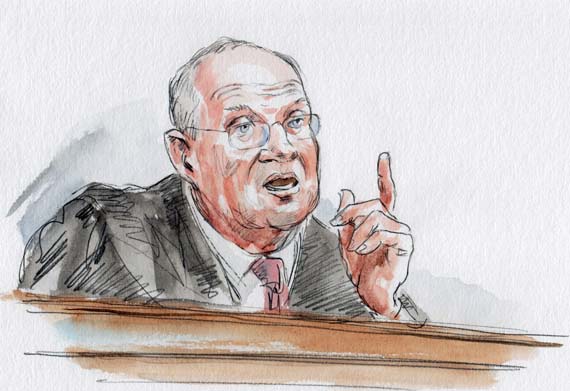 Leah Litman is an assistant professor of law at UC Irvine School of Law. She clerked for Justice Anthony Kennedy during the October 2011 term.

Other justices are celebrated for hiring counter-clerks — clerks who are hired because they often disagree with a justice, not in spite of it. In Justice Anthony Kennedy’s case, all of his law clerks are his counter-clerks. There probably is not a single lawyer in the United States whose views align entirely with the justice’s, and there probably hasn’t been one for a while. And it says something good about him that he would hire someone like me, who was constitutionally incapable of telling him what he may have wanted to hear, even now.

By the time the justice interviewed me, he had certainly grown accustomed to disagreement, but maybe hadn’t grown to like it. During the interview, the justice brought up one of the rare areas of law in which he found himself in dissent and asked what I thought about the direction the Supreme Court had taken. I replied that I thought the court had gotten it right. I also couldn’t help but add that I thought the court hadn’t pressed the principle as far as I thought it should go. The justice smiled and nodded, and hired me on the spot.

Confidentiality rules make it difficult to use more than that anecdote to demonstrate just how much the justice managed to keep the conflict that always surrounded him and his work at arm’s length, perhaps to ensure it didn’t affect the person he is. And he succeeded at that and more: Justice Kennedy is as genteel and polite as his public persona suggests — he is so darn nice that his clerks like to think we are each his favorite. Even 20-plus years into his time on the court, the justice has never spoken an unkind word to any of us. He thanked us for our work on every case, and he would always share when a particular memo or draft was especially good, but never when it may have been especially bad.

It may have helped in keeping things nice that the justice managed to find agreement with both wings of the Supreme Court in major, high-visibility cases, a propensity that contributed to his being labeled as the “swing” justice. The justice didn’t care for that moniker, and after my clerkship, I understood why it is wrong. The word “swing” suggests the justice goes back and forth in his views. But the opposite is true: He has a readily apparent set of commitments to principles such as federalism and free speech, including a deep skepticism of the government’s ability to decide what speech is permitted and what speech isn’t. No one could seriously doubt the sincerity with which he holds those views, which have sometimes led him both to positions he didn’t support as a matter of policy and to decisions he was especially proud of.

It’s true the justice extensively considered his votes in cases, but he did that because he was committed to getting things right, and sometimes getting things right required him to get into the weeds. The term I clerked, the Supreme Court heard a statutory interpretation case that had fairly low stakes — it was never going to garner any headlines, and it affected only a small number of people. In his office, we mapped out the various statutory provisions, when they were enacted and how they related to one another. We did that both on a big drawing board and later on the justice’s computer, occasionally overlaying the litigant’s characterizations of the provisions from the briefs and argument, until the justice was satisfied he had arrived at the right answer. He never ended up writing a single word about the case, and he knew that he probably never would. But that didn’t matter; getting the right answer did, no matter how long it took.

Other times, however, the justice may have managed to avoid conflict by existing up in the clouds rather than down in the weeds. Instead of the pointed zingers that his colleagues directed at him (some of which should probably have never made their way into the U.S. Reports), the justice chose to write about the inherent goodness of America — not necessarily who America is, but who America should be, at least from the justice’s perspective. So, for example, the justice wrote: “At the founding, speech was open, comprehensive, and vital to society’s definition of itself; there were no limits on the sources of speech and knowledge.”

Two other passages from OT2011 contain similar undercurrents of the justice’s faith in the American constitutional project, and a desire to (re?)make America in that idealized image. The joint dissent in National Federation of Independent Business v. Sebelius, for example, underscores both the importance of federalism and the Supreme Court’s role in preserving it:

[T]he restraints imposed by federalism … are less romantic and have less obvious a connection to personal freedom than the provisions of the Bill of Rights or the Civil War Amendments. Hence they tend to be undervalued or even forgotten by our citizens. It should be the responsibility of the Court to teach otherwise, to remind our people that the Framers considered structural protections of freedom the most important ones, for which reason they alone were embodied in the original Constitution and not left to later amendment.

The justice’s opinion in Arizona v. United States also adopted an instructive, almost admonishing, tone, this time about the importance of civility and rationality in politics. He wrote: “With power comes responsibility, and the sound exercise of national power over immigration depends on the Nation’s meeting its responsibility to base its laws on a political will informed by searching, thoughtful, rational civic discourse.” But what happens if a nation’s immigration laws aren’t informed by searching, thoughtful, or even rational discourse, I’ve found myself wondering recently.

At the end of the term, I got my answer—nothing. The justice who said and did so many things that reflected a muscular commitment to judicial supremacy finally balked, and he did so in his final writing on the Supreme Court. What he gave us, with his last words, was a rare statement that courts are not able to fix everything.

Indeed. (Although, as this term hinted, they can certainly make things worse.)

The justice’s intense preference for being nice isn’t an act, and all of his (counter-)clerks benefited from his kindness in many ways. Sitting around the lunch table, the justice would tell stories about the people who had sat around the table before us. Every story made clear how proud the justice was of his clerks, and how much he had enjoyed having them in chambers. There is the hilarious story of the clerk who volunteered for a securities law case without knowing what Rule 10b-5 was, but went on to be a wildly successful lawyer who practiced securities law, among other things; there is the inspiring story of the clerk who gave the best oral argument the justice had seen, maybe of all time, but definitely during that particular term; and so on. One time, the justice showed me an email he had received from one of his former clerks who had just secured her first murder conviction. He was so proud of her, and he couldn’t wait to show future clerks similar emails from my co-clerks and me.

The justice’s pride in and loyalty to his clerks came out in other ways as well. One of the few times I ever heard a harsh word from him was when he spoke about former clerks who had been treated unfairly in the judicial confirmation process. A part of me wonders if he retired under the (not unreasonable) assumption, and perhaps not-so-subtle suggestion, that one of his former clerks would replace him. The justice’s loyalty even extends to former law clerks’ sons and daughters, several of whom he hired as law clerks themselves.

When the justice hired me, I was excited to work for him, but I was also nervous about fitting into chambers. In the interview, the justice had brought up “Legally Blonde,” and a part of (blonde) me wondered why. (It turns out the justice has quite the affinity for the movie; it’s on a reading list he made, titled “Understanding Freedom’s Heritage: How to Keep and Defend Liberty,” and he regularly brings up the movie in public appearances.) I also looked at the photos of all the former clerks that hung in his chambers, and the photos didn’t include very many “lady law clerks,” as he called us. If memory serves, there were around 15 out of 90-plus clerks.

I shouldn’t have been worried, at least not really. The last year has drawn attention to some of the challenges that women face in the workplace, including clerkships. Writing presciently several years ago, Dean Heather Gerken observed:

It is sometimes hard for an older man to mentor a young woman without crossing a professional line. Older bosses sometimes treat young women like daughters, or they indulge in the sort of hazing rituals that are routinely inflicted on male upstarts but inevitably feel uncomfortable when applied to their female counterparts.

Justice Kennedy was not exactly woke on issues related to gender equity. But the man tried to be fundamentally decent to the people around him. And he was decent and unfailingly kind to this lady law clerk, even though she was a bit of a know-it-all, and even though societal and cultural norms against assertive women might have caused him to act otherwise.

I’m still a bit of a know-it-all, and that’s probably why this post isn’t the piece of schmaltz that tributes to judges or justices tend to be. That genre is about saints who have never made a wrong decision and who always follow the law, free of any preconceived beliefs about the world or experiences in their lives. But that milquetoast story would be just that, a story; I’ve never met that person, and I’m pretty sure they don’t exist, so why pretend they do? Supreme Court justices are people, after all.

What Justice Kennedy showed us, or at least he showed me, is that you can be good and do good even if you are imperfect. Sure, the best things about him sometimes got the best of him, but even without any whitewashing, Justice Kennedy is still a person worth honoring.