Empirical SCOTUS: The state of the states before the Supreme Court (Corrected) 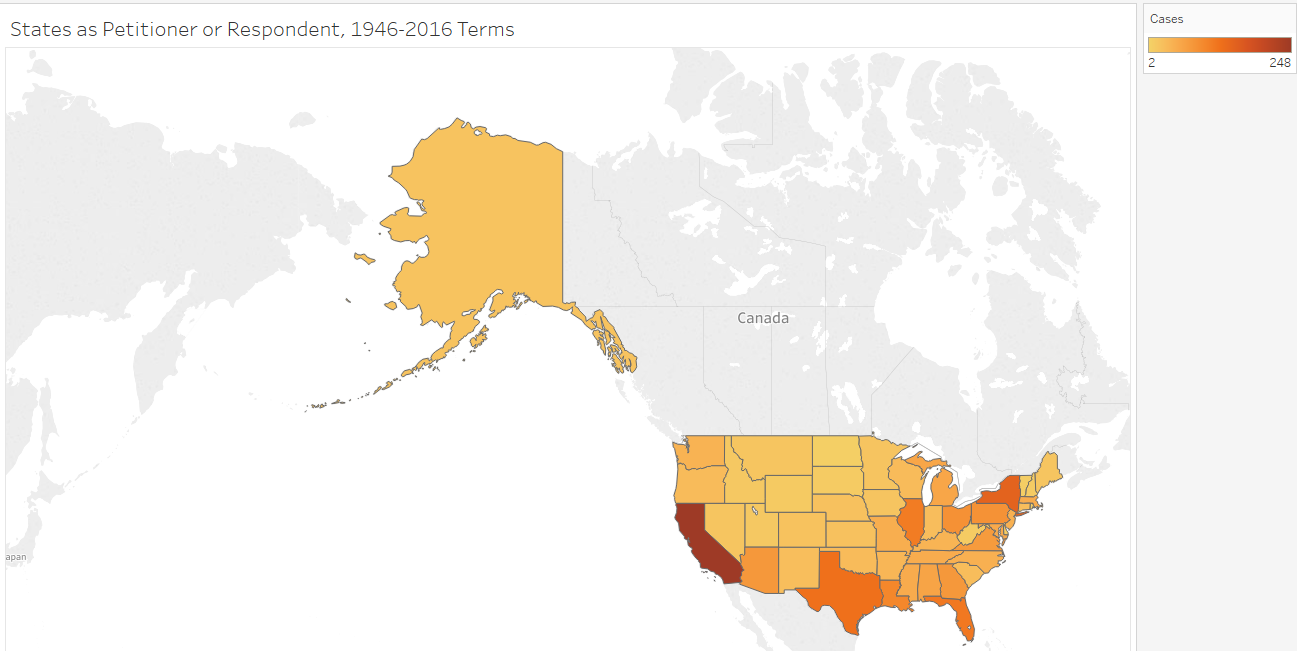 Rather than originating from a federal court of appeals like the majority of cases before the Supreme Court, the most discussed case of this term came from a state court. Masterpiece Cakeshop v. Colorado Civil Rights Commission was petitioned to the Supreme Court after a decision from the Colorado Court of Appeals, and Colorado’s solicitor general, Frederick Yarger, handled the argument for the respondent, the Colorado Civil Rights Commission.

As the highest court in the land, the Supreme Court is the only appellate court to hear cases from both state and federal courts. This term, the court heard arguments in seven other cases along with Masterpiece Cakeshop in which the court below was a state court. [The following links for these cases are to the lower-court opinions: Cyan Inc. v. Beaver County Employees Retirement Fund, Masterpiece Cakeshop, Artis v. District of Columbia, Collins v. Virginia, Currier v. Virginia, McCoy v. Lousiana, Upper Skagit Indian Tribe v. Lundgren and South Dakota v. Wayfair.] Aside from cases that start in state courts, many other cases, like the recently decided Murphy v. National Collegiate Athletic Association, have vast implications for the states and state laws. Because many of the court’s most well-known cases come from federal courts of appeals, however, cases in which states are involved or that come from state courts can be overlooked. These cases play an incredibly important role in the Supreme Court’s annual docket and the decisions often have vast implications for state populations as well as for the nation as a whole.

What types of issues arise in state-court cases that are later brought before the Supreme Court? To begin by examining a slice of these cases, the court regularly reviews state courts’ death sentences. Along with the continuous stream of stay applications and other emergency motions the court receives, the court reviews a handful of state-court decisions in capital cases on the merits. Some of these decisions have drastically altered the practice of capital punishment nationwide, including the decision that halted the practice, Furman v. Georgia, and the one that reinstated it, Gregg v. Georgia. When we look at the capital-punishment cases the court has chosen to review on the merits since the beginning of the Warren court in 1953, cases from several states in particular take up a disproportionate share of the court’s 8th Amendment capital-punishment jurisprudence (according to the United States Supreme Court Database’s coding). 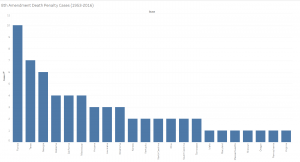 Several recent high-profile death penalty decisions came from Florida, including the 2015 decision in Hurst v. Florida, which held Florida’s division of labor between judge and jury in capital cases unconstitutional. The court heard the second most cases from Texas, the state with the most executions over the past several decades.

Cases involving state actors or beginning in state courts are not always easy to locate just by looking at a case’s title, especially when the party is an actor within a state. Although eight cases came to the Supreme Court from state courts this term, 21 state government attorneys, mainly solicitors general, argued before the Supreme Court. That is an increase from ten such cases last term and 20 in the 2015 term.

Several of these state attorneys are regular participants before the Supreme Court. Looking over the past three terms’ oral-argument data, the following state actors argued before the court: 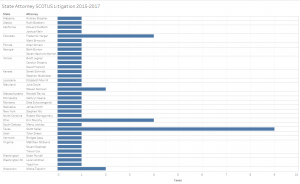 As is apparent above, the lion’s share of state-related cases over the past several terms originated in Texas and were argued by Texas Solicitor General Scott Keller. Previously mentioned Colorado Solicitor General Frederick Yarger, along with Ohio Solicitor General Eric Murphy, also argued a large number of cases in the Supreme Court between the 2015 and 2017 terms. This term, for instance, Eric Murphy argued in National Association of Manufacturers v. Department of Defense and Husted v. Randolph Institute, Scott Keller argued in Abbott v. Perez and Texas v. New Mexico and Colorado, and Frederick Yarger also argued in Texas v. New Mexico and Colorado as well as in Masterpiece Cakeshop. 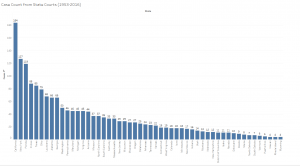 The Supreme Court has heard many more cases that originated in California state courts and were appealed from the California Supreme Court or from a California court of appeals than cases from any other state’s courts. A large portion of these state cases also came from New York, Florida, Illinois and Texas, with only a scant number from less populated states like Wyoming, Rhode Island and Hawaii.

This look at the raw counts of cases from state courts misses the time element – specifically, how frequently the justices hear such cases. The next figure looks at the percentage of cases the Supreme Court heard after a decision from a state court by term since 1953. 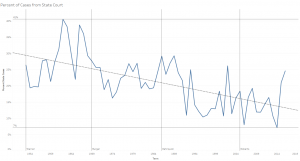 The Supreme Court used to take a larger share of cases from state courts, and this has been almost cut in half as we move toward the present. The largest share of cases that the court heard after a state court in a term was 42 percent, while the smallest was seven percent. 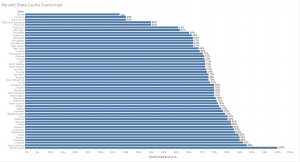 The Supreme Court reversed fewer than 50 percent of the cases from only three states — Maine, Vermont and Puerto Rico (treated as a state for the purpose of this analysis). On the other end of the spectrum, the court overturned all four cases it heard from Rhode Island courts. The court has also overturned over 60 percent of cases from both California and New York courts.

Another way to look at state involvement in the Supreme Court is through instances when states themselves are direct parties to Supreme Court cases. While the distribution mostly parallels that of the cases from state courts, these two sets of cases are far from identical. (State government attorneys, for instance, participate in many cases that do not involve the state as a party.) 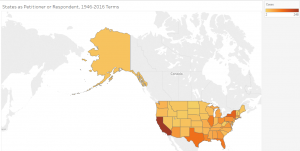 As with the state-court distribution, California is the leader in terms of party participation. Several states in the northeast are regular participants before the Supreme Court, although none as frequent as California. Texas and Florida are also darker shades than many other states because of their greater level of participation.

States have not participated in the Supreme Court at a static rate over time though. Looking at four of the most regular participants — Florida, Texas, New York and California — we can see the changes in their Supreme Court litigation over time. 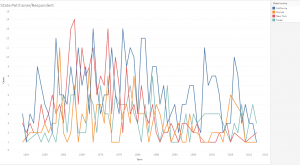 California was not always the most active participant of the bunch. New York took this most active position during several of the Warren court years. Florida has had several terms when it was the most active state of the four before the Supreme Court. Texas has remained consistent in its participation, at a rate generally below those of both California and New York.

Of course, along with participation, another way to look at involvement in Supreme Court litigation is through relative success. The first way to do this is by viewing the absolute numbers of wins and losses for states both as petitioners and respondents before the Supreme Court. The following figures, beginning with the petitioners’ figure, use data from the 1946 through 2016 terms. 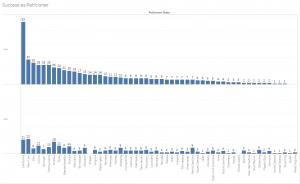 California is by far the most dominant petitioner state both in terms of wins and overall cases. New York has the second most wins, with less than half as many as California. The only state on the petitioner list with zero losses is Oregon.

States, however, are more often respondents in the Supreme Court. This is primarily due to criminal-procedure-related cases, which compose almost 50% of the types of cases in which states are respondents. The following figure tracks states’ wins and losses as respondent parties before the Supreme Court since 1946. 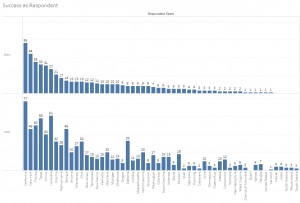 The final figure breaks these states’ wins and losses into overall success rates. 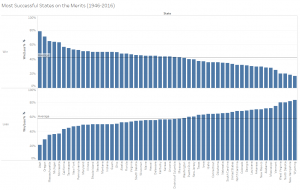 Cases from state courts make up a smaller share of the Supreme Court’s docket than they did in the past, but certain cases from state courts, including Masterpiece Cakeshop, are tracked by large numbers of court-watchers. Furthermore, attorneys on behalf of several states including Texas and California will likely continue to be regular participants before the Supreme Court. Certain attorneys like Scott Keller and Eric Murphy have had as much experience before the Supreme Court as some of the more experienced repeat players from private practice and have developed corresponding reputations for their expertise. If states win big-name cases like Masterpiece Cakeshop, it will only amplify their status as formidable parties before the Supreme Court that can hold their own against any other party, firm and attorney with significant Supreme Court expertise.

An earlier version of this post did not include Robert Montgomery as a state government attorney arguing before the Supreme Court last term.

Recommended Citation: Adam Feldman, Empirical SCOTUS: The state of the states before the Supreme Court (Corrected), SCOTUSblog (May. 16, 2018, 2:21 PM), https://www.scotusblog.com/2018/05/empirical-scotus-the-state-of-the-states-before-the-supreme-court/