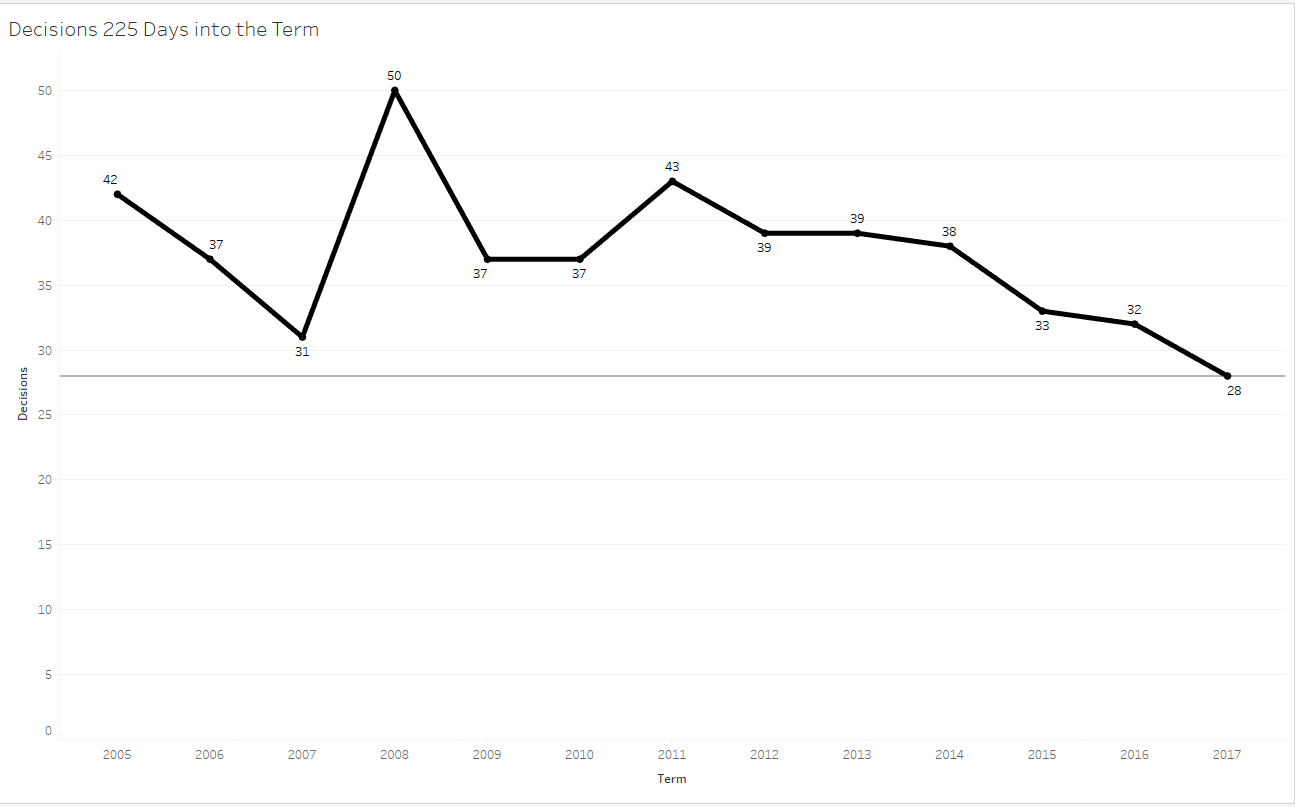 Yesterday marked the 225th day of the 2017 Supreme Court term. The court compensated for a slow term so far with five new decisions. Even with these rulings — Murphy v. NCAA, Dahda v. United States, Byrd v. United States, United States v. Sanchez-Gomez and McCoy v. Louisiana — the court is still behind its output every other year under Chief Justice John Roberts. Counting the output from days since the first oral argument of the term seems the most appropriate way to normalize the court’s output rate across terms. This figure shows where the court stands now in terms of decision output and how this compares to all of the terms since 2005. 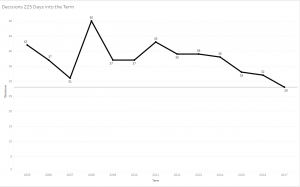 The Supreme Court’s previous low count for opinion output after 225 days was in 2007, with 31 opinions.

When we look at output per justice 225 days into the Supreme Court term, all justices are at or below their average output rate this far into a term under Roberts. 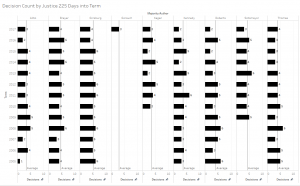 Roberts and Justice Anthony Kennedy each issued an opinion yesterday, matching their previous low output counts of two majority opinions apiece 225 days into the term. With only three majority opinions, Justice Sonia Sotomayor is the only justice to set a new record for herself at this point in a term.

Other measures show similarity between this term and the preceding terms under Roberts. Although the Supreme Court has taken a long time between oral arguments and decisions in cases this term, especially with the 195 days between the oral argument and the decision in Jesner v. Arab Bank, the court was moving even slower on average at this point in the term in 2009, as the following figure demonstrates: 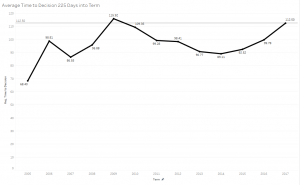 The court is, however, still moving considerably slower this term than it has in all terms since 2010.

With 34 decisions left on the court’s slate, the justices still have to generate decisions in more than half of the cases argued this term. Even so, because the court has also been hearing fewer cases, the justices had more outstanding decisions at this point in three terms under Roberts. 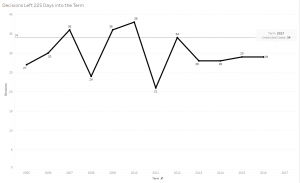 Finally, even with the divisiveness between justices evident in split decisions with multiple separate opinions, as was the case in Murphy v. NCAA, the court has been more fractured on average this far into a term several times under Roberts. The following figure tracks the average difference in majority versus minority votes by case 225 days into the term. 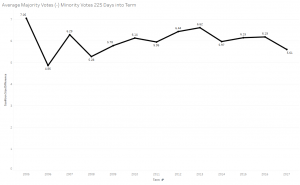 The Roberts court has twice had lower average coalition difference sizes 225 days into the term. Although the court is still on the low end for this aspect of voting, it is not looking to set records in this respect.

By accelerating its output with five decisions yesterday, the court is on a closer track to its position in previous terms. The justices still have not decided many high-profile cases argued earlier in the term, including Gill v. Whitford and Masterpiece Cakeshop v. Colorado Civil Rights Commission. The length of time since the arguments in these cases leads to speculation that the justices are having difficulty forming coalitions. With many divisive cases still undecided, we may see another slowdown in the court’s output before this term comes to an end.