Argument analysis: When neither baseball nor Vermeer analogies persuade the court 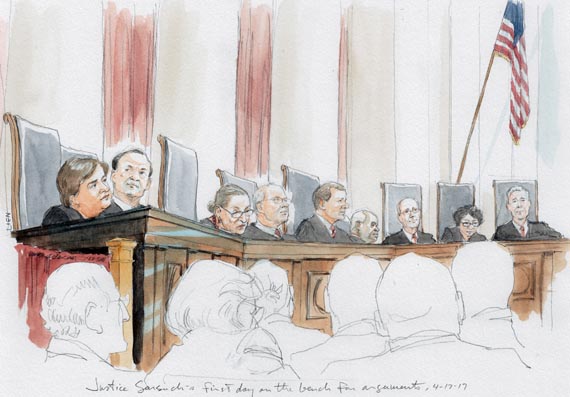 Justice Gorsuch's first day on the bench for arguments
Share

The Supreme Court showed no great interest in the bankruptcy problem at the heart of Lamar, Archer & Cofrin, LLP v. Appling, in which the court heard argument yesterday. From the beginning, the justices asked relatively few questions of either party. Those they did ask did not appear to go well for Lamar, Archer & Cofrin, a law firm seeking to recover a debt from R. Scott Appling, a less-than-honest former client. When the justices finally perked up later in the session, they seemed largely interested in trying to figure out exactly how broadly to rule in favor of Appling.

This case is about whether a debtor’s false statement about a single asset can be a statement “respecting the debtor’s … financial condition.” To use an example adopted by both Justices Stephen Breyer and Neil Gorsuch, if one says, “I own a genuine Vermeer,” does that statement tell the listener about one’s financial condition? This matters because the Bankruptcy Code generally relieves debtors from their obligation to repay debts, but excludes debts obtained by false representations from this relief — unless, as provided in 11 U.S.C. §523(a)(2), those false statements are “respecting the debtor’s … financial condition.” Here, Appling was unable to pay his legal bills, but Lamar agreed to continue working and forbear from collecting on the bills already due because Appling allegedly claimed that he was expecting a large tax refund that would more than cover the outstanding bills. If statements like “I can’t pay my bills now, but I will when I receive my tax refund” are statements “respecting the debtor’s … financial condition,” then Appling’s debt to Lamar is dischargeable under the Bankruptcy Code.

Representing Lamar, former solicitor general Gregory Garre was in a tough spot. To win, he has to persuade the court that the Bankruptcy Code uses a handful of very common words as terms of art. To be fair, the Bankruptcy Code sometimes does this — a gulf separates the bankruptcy meanings of phrases “to avoid” and “preference” from their meanings in everyday language — but the provision at issue here seems not to be one of those times. Garre began by arguing that “financial condition” means something more specific than “finances” and that “respecting” is more specific than “about” or “relating to,” but he struggled to get the justices on board. He parried with Justices Elena Kagan, Sonia Sotomayor and Breyer through a baseball analogy, but he could not come up with a sentence that was plausibly about a player’s batting average, but was not a statement “respecting” a player’s batting average.

Garre then tried a more categorical assertion: that any statement that concerns a single asset cannot be a statement about one’s “financial condition.” Perhaps sensing that his textual argument was not gaining traction, he pivoted to the history and purpose of the statute, which he described as “sort of the gorilla—it’s the elephant in the room.” He argued that Congress passed Section 523 in response to shady lenders “dup[ing] applicants for credit into making false statements by simply omitting debts or assets on those statements, and then using that as coercion once they went into bankruptcy.” But this argument also did not appear to win him any friends. Gorsuch summed up the mood, saying, “I’m not sure I understand how that helps you even on its own terms, assuming I’d be willing to look at it, of course.” As Gorsuch interpreted Garre’s argument, “an omitted liability, one asset or lack – or one debt can reflect on the overall financial condition.” Garre pressed on, but Gorsuch finally expressed enough incredulity to nudge the advocate on to his next argument.

Garre then suggested that the court could apply a reasonable-person test to determine whether a statement about a single asset could be about one’s overall financial condition. But both Breyer and Gorsuch seemed to think that this contextual argument cut in favor of Appling. Garre could fall back only on his broad policy argument that the Bankruptcy Code provides relief to honest debtors but not to dishonest debtors.

Paul Hughes, representing Appling, received a few softball questions from the justices. Justice Samuel Alito invited Hughes to comment on Garre’s argument that statements about the ability to pay are not statements about one’s financial condition, but he did not challenge Hughes’ assertion that “it’s hard … to see the distinction between those two.”

The only pushback Hughes received was on policy grounds. Sotomayor asked if Appling’s reading of the statute would protect debtors. Hughes explained that there are other protections for debtors in place. Ginsburg and Chief Justice John Roberts questioned Hughes about the burden on small businesses. In an amicus brief in support of Lamar, the National Federation for Independent Businesses argued that the holding of the U.S. Court of Appeals for the 11th Circuit would impose additional costs and losses on them, a claim for which NFIB had cited its own report. Hughes deftly observed that the same report also said that bankruptcies are not a significant problem for small businesses.

By the end of Hughes’ argument, the justices seemed most interested in how to rule in Appling’s favor.  They questioned Hughes and Assistant to the Solicitor General Jeffrey Sandberg, arguing on behalf of the United States as amicus curiae, about whether they should adopt Appling’s proposed reading of the statute or that of the federal government, which emphasizes the “context and purpose” of the alleged false statement. Both Hughes and Sandberg conceded that there is no practical difference between their interpretations of the statute. By that point in the argument, it seemed difficult to imagine that the justices would be deciding the case in Lamar’s favor.

On the whole, it seems unlikely that the justices’ ruling will clarify much beyond a few words in Section 523. This case may be in the running for the narrowest decision of the term.