Argument analysis: Does a statute of limitations apply to SEC actions for disgorgement?

Big money is on the line, not just in Kokesh v. Securities and Exchange Commission, but in a number of cases in which the SEC seeks to force wrongdoers to disgorge gains ill-gotten in days of yore. Although prognostication is a risky business, Tuesday’s oral argument would prompt a wager on the side of the petitioner, Charles Kokesh. The justices appeared unimpressed by the prospect of permitting the SEC to avoid an arguably applicable statute of limitations.

Kokesh misappropriated $34.9 million of investors’ funds between 1995 and 2006. A 2009 enforcement action brought by the SEC led, at the district court level, to civil penalties of $2.4 million for misconduct between 2004 and 2006, as well as to an order to disgorge the entire amount diverted beginning in 1995. Because of the length of time and the “tens of thousands” of investors involved, the disgorged amounts would not be returned to victims, going instead to the U.S. Treasury. The U.S. Court of Appeals for the 10th Circuit upheld the entire disgorgement award as not time-barred by 28 U.S.C. §2462, a statute of limitations requiring that “enforcement of any civil fine, penalty, or forfeiture” be “commenced within five years from the date when the claim first accrued.” Although the 10th Circuit’s opinion was in line with that of the other federal courts of appeals previously considering the issue (including the U.S. Courts of Appeals for the 1st and District of Columbia Circuits), the U.S. Court of Appeals for the 11th Circuit subsequently broke from the herd in Securities and Exchange Commission v. Graham.

Kokesh’s main argument is that disgorgement is either a “forfeiture” or a “penalty” and thus subject to Section 2462. This means an enforcement action initiated in 2009 could capture proceeds no further back than 2004.

The government counters that disgorgement is neither a “forfeiture” nor a “penalty” – it simply prevents a wrongdoer from enjoying unjust enrichment. To repeat an analogy used in the argument preview, refusing credit to a student for a plagiarized paper neither punishes the student nor constitutes deprivation of an entitlement – it just keeps the student in the status quo.

What disgorgement is and isn’t

On the eve of the argument, the briefs seemed matched right down to competing arguments based on the canon “noscitur a sociis” (Latin for “known by the company you keep”), which instructs that the meaning of a word can be determined by the words associated with it. The SEC argued that because the “penalties” and “fines” referred to in the statute both are punitive, “forfeiture” must be too, while Kokesh argued that “fines” and “penalties” both are “in personam” money judgments, just like disgorgement. There also were plenty of (non-dispositive) precedents to go around, with the parties reading many of the same cases in their own favor.

Also teetering at the fulcrum were arguments speculating about what Congress meant by “forfeiture” in 1839, when enacting Section 2462’s predecessor. Although disgorgement wasn’t sought as a remedy until 1970, both sides found plausibly supportive historical sources. The SEC’s case, however, may have been stronger: Kokesh’s best “forfeiture” finds related to relinquishment of something a miscreant already owned (like goods he was smuggling) rather than the actual proceeds of crime.

By and large, the justices did not evince much interest in either legal history or old Latin terms, although there was a lot of attention paid to other matters, some of which had not been briefed. For instance, the government almost certainly found it disconcerting that Justices Samuel Alito, Sonia Sotomayor and Anthony Kennedy all specifically questioned the source of authority for the commission to pursue disgorgement remedies at all, while newcomer Justice Neil Gorsuch said, “there’s no statute governing it. We’re just making it up.” Chief Justice John Roberts was similarly skeptical, stating, “we kind of have a special obligation to be concerned about how far back the government can go when it’s something that Congress did not address because it did not specify the remedy.”

Probably coming as a surprise to both parties, a number of questions suggested that the court might consider taking a “non-categorical” approach, characterizing disgorgement as non-penal and not subject to Section 2462 only when the objective of the remedy is victim compensation. According to Kennedy:

The case is presented to us as if disgorgement is this category we must adopt. … It’s always a penalty or it’s always not a penalty. It seems to me that maybe we can give guidance on when it is a penalty.

Adam Unikowsky, arguing for Kokesh, responded that “as a matter of both doctrine and practicality, it should be all or nothing.” At another point, however, citing United States v. Beebe, Unikowsky also made the argument that if the remedy were directed at victim compensation, it properly would be subject to a statute of limitations governing private rights of action, even if the case were brought by the government. 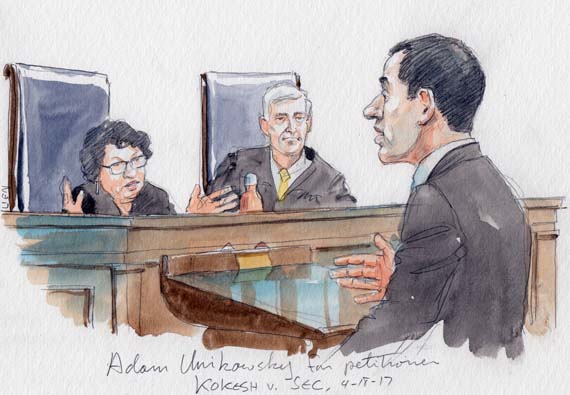 One of Kennedy’s questions about victim compensation elicited new factual information. According to Assistant to the Solicitor General Elaine Goldenberg, arguing for the government, the SEC has calculated that for 2013 to 2016, 43 percent of disgorgement recoveries went to the Treasury, while from 2013 to 2015, the rate was 33 percent. Goldenberg also was able to clarify for the court that disgorgement is something requested by the commission at the district-court level, with a non-binding recommendation as to whether it should be disbursed to victims or paid to the Treasury (from which it might still be paid to victims). Justice Elena Kagan, for one, seemed troubled about the lack of clear guidelines governing SEC recommendations.

Justice Stephen Breyer engaged in the one of the longer, more colorful exchanges of the day. As noted above, Section 2462 covers both “fines” and “forfeitures,” as well as “penalties,” so the SEC must establish that disgorgements are none of the above. In pressing for a list of the ways that disgorgement differs from the specified categories, Breyer posited a city taxing both houses and boats, and a would-be non-taxpayer who owned a houseboat.

It’s not a house. Houses don’t go on water. Not a boat. Look at the French windows, look at the venetian blinds. No tax.

Now, I think that would last about five minutes, that argument.

Several minutes later, Breyer and Goldenberg agreed that the government’s position was that “[fines and penalties take] away from a person something that otherwise he would be rightfully entitled to, and disgorgement takes away … a thing he would not be rightfully entitled to.” Although at other stages of the argument Sotomayor described the SEC’s arguments as “somewhat persuasive,” at this point she seemed distinctly unconvinced, saying “I think making someone whole is a forfeiture … if it looks like a forfeiture, why don’t we treat it like a forfeiture?” Gorsuch urged that criminal forfeitures clearly are penalties and asked, “So why does the form, whether this is civil versus criminal, make all the difference?” 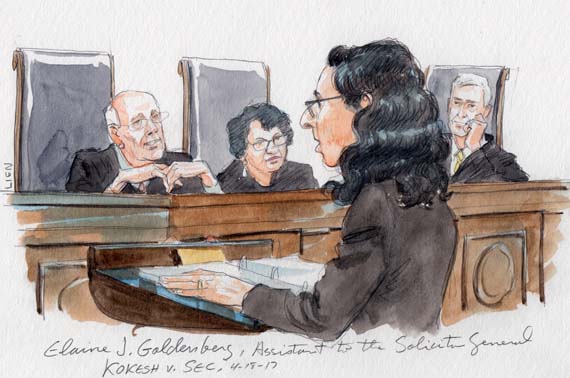 Discussed more than once was the fact that defendants sometimes are forced to disgorge benefits they don’t actually retain, with Unikowsky noting that, in insider-trading cases, tippers often are required to disgorge the profits of their tippees. Earning a laugh, Sotomayor suggested that if she committed a crime and gave half her proceeds to Breyer, she would have benefited from the whole amount. (Securities lawyers will recognize this as essentially the reasoning of last fall’s unanimous insider-trading decision in Salman v. United States.)

Unikowsky succeeded in conveying two main points more clearly and persuasively during the oral argument than he had in his briefs. He made much of the government’s inconsistency in claiming that disgorgement is a penalty for some purposes (including non-discharge in bankruptcy) and not for others. He also left the impression that there is a statute of limitations applicable to virtually every other monetary remedy, public or private, known to mankind, prompting the obvious lingering question, “Why not here too?” Goldenberg’s invocation of the “narrow construction principle” – a presumption against imposing a statute of limitations on the sovereign without clear legislative intent – was clear and on point, but didn’t seem to arouse too much interest. The justices were more engaged when Goldenberg explained the commission’s disincentives to unfairly delay enforcement, particularly in the wake of its recent loss in Gabelli v. Securities and Exchange Commission, which held that Section 2462’s limitation period starts running when the bad act occurs rather than when the SEC discovers it.

If Tuesday’s oral argument were all there were to go on, Kokesh would look like the favorite to win. Factoring the briefs back in (as one properly should) could somewhat even the odds. Something to keep in mind is the possibility that, although neither side is asking for it, the court could devise a “non-categorical” solution that would see Kokesh walk away with a win but keep alive for another day the prospect that Section 2462 will not apply to actions clearly seeking victim compensation.