Tuesday morning’s argument in Bristol-Myers Squibb v. Superior Court of California brought the justices a case at the intersection of class actions and personal jurisdiction. The case involves litigation by several hundred individuals from 33 states (many, but not all of them, from California) for injuries associated with the Bristol-Myers drug Plavix.

The justices were fully engaged, with pointed questions for advocates on both sides. The biggest problem for the defendant Bristol-Myers (represented by Neal Katyal) was the prospect of “piecemeal litigation,” a theme Justice Sonia Sotomayor reiterated throughout the argument. Her concern was that a constitutional rule preventing one forum from adjudicating all the claims against a single defendant would cast a shadow over commonplace procedural devices such as the class action and multidistrict litigation. 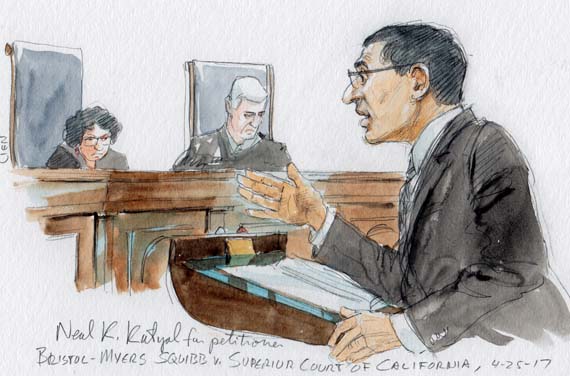 Katyal’s answer was that the rules for due process in federal courts and state court are quite different, emphasizing that federal courts, founded on national sovereignty, have an easy justification for nationwide service of process and the like, while state courts, founded on the limited territorial sovereignty of any particular state, have a much less easy time justifying the exercise of jurisdiction for nonlocal claims involving nonresidents. Justice Anthony Kennedy plainly agreed with that point, commenting that “there’s a different set of criteria [that] you apply” when assessing due process concerns at the two levels; “[t]he States are limited in their [ability to exercise] jurisdiction … nationwide, the Federal government isn’t.”

But Sotomayor was far from satisfied. As she stated, “I have no idea how you draw that [state-federal] line.” Sotomayor’s questioning was particularly pointed during the presentation of Rachel Kovner, an assistant to the U.S. solicitor general who argued in support of Bristol-Myers. For example, positing a hypothetical about a foreign defendant, Sotomayor pointed out that “[u]nder your theory, [a] foreign corporation might be sued in the particular State in which an injury occurred. But since it has no home State in the United States, that means that in that situation, there’s no place for plaintiffs to come together and sue that person, correct?” Similarly, returning to her concern about the need for efficient nationwide litigation, she asked Kovner: “If due process says that you can’t hale someone into a court with which they’ve had no contacts, how do you justify the many criminal statutes we have – RICO, CERCLA, there’s a whole bunch of them – that permit the joinder of all of these defendants in one indictment?”

Parallel to that problem was a “so what’s the big deal” theme, put most clearly by Justice Elena Kagan. All agree that Bristol-Myers is subject to suit in California at the behest of the hundreds of California residents who used Plavix, and all agree that Bristol-Myers can hardly be surprised at the location of that litigation given its marketing and distribution in the state. Given those points, Kagan asked, “why is it unfair to glom on Texas claims and New York claims to the California claims, once we already have a mass action which will have multiple jury trials? … [Y]ou already know because this is … nationwide marketing … that you’re subject to jurisdiction in any of the 50 States.”

That’s not to say that it was smooth sailing for Thomas Goldstein (appearing on behalf of the non-resident plaintiffs, trying to preserve the California forum). Several of the justices seemed firmly set against his argument that Bristol-Myers’ contacts with California residents should have any weight in assessing its vulnerability to a California suit brought by nonresidents. 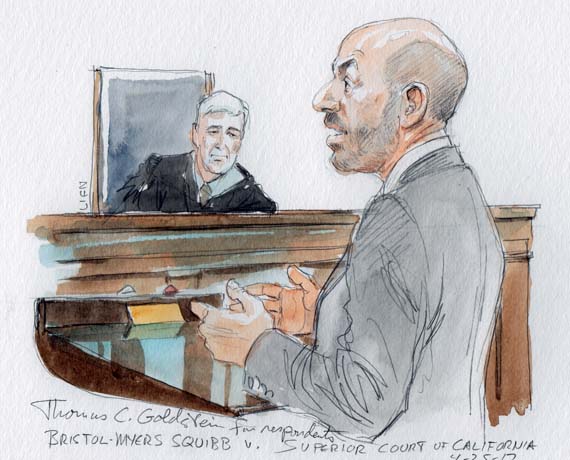 So, for example, one group of justices thought his argument failed to give due weight to the states outside California. In Justice Anthony Kennedy’s view, Goldstein was offering “a very patronizing view of federalism. California will tell Ohio ‘Oh, don’t worry, Ohio. We’ll take care of you.’ That’s … not the idea of the Federal system. The Federal system says that States are limited.” In the same vein, Kagan asked what Goldstein had to say “about the interest of the State the Bristol-Myers resides in? In other words, they might have an interest in not having their citizens haled into court against their will in another part of the country.”

More generally, Kagan seemed to find Goldstein’s proposed due process framework inconsistent with her understanding of the cases. She likened his argument to a Rube Goldberg arrangement in which “the claim relates to another claim that relates to contacts with the forum.” In her view, by contrast, the law requires a direct relationship between the plaintiff and the defendant’s contacts with the forum:

Following up on that point with similar skepticism, Justice Stephen Breyer at one point asked “what is it I say in a single sentence that … make[s] it clear to that defendant why he is here?”

In response, Goldstein pointed to the role of McKesson – the California-based distributor through which Bristol-Myers distributed much (though not all) of its Plavix sales. McKesson’s role as a distributor leaves it a defendant alongside Bristol-Myers with respect to many of the out-of-California plaintiffs. Because McKesson is based in California, California plainly has the authority to adjudicate all of the claims of nonresidents against McKesson. Picking up on an earlier interchange between Justice Ruth Bader Ginsburg and Kovner, in which Kovner had acknowledged that under Bristol-Myers’ theory, there might be no other “place where these plaintiffs could sue McKesson as well as Bristol-Myers,” Goldstein suggested that the role of McKesson provided yet another reason why this particular case could be adjudicated in California. That prompted a curt rejoinder from Justice Neil Gorsuch, who found it “a very fact-specific argument.” Gorsuch went on to add that “we took this, I thought, to decide whether we … permit this sliding scale business that California engages in, as a legal matter.” When Goldstein responded that McKesson’s role was integral to the lower court’s analysis and that it would be “very confusing to the lower courts to simply cast it aside,” Gorsuch retorted: “What’s confusing, though, about simply saying ‘here’s the correct test, reverse, remand, go apply the correct test’?”

The most difficult portion of Goldstein’s presentation came when he suggested (echoing Kagan’s point from earlier in the morning) that California jurisdiction is made more palatable by the presence of several hundred indisputably local claims involving local residents. The implicit suggestion of a balancing test involving the number of local residents struck a raw nerve with Chief Justice John Roberts, who interjected that “we’re dealing with a jurisdictional rule, and when we do that, we want the rules to be as simple as possible. … [Y]ou’re articulating a rule that [governs] businesses trying to figure out where to do business and plaintiffs where to sue and courts whether it’s [permissible]. Your rule depends upon some line between [a] handful and … hundreds.”

Then, when Goldstein tried to defend that line, Kagan brusquely cut him off, arguing that Goldstein’s comments to Roberts contradicted his earlier discussion with her:

Somewhat surprisingly, it was only near the end of the argument that the discussion turned to the problem of specific and general jurisdiction that occupied so much of the briefing. Responding to the interchange with Roberts and Kagan by acknowledging some tension between his position and some of the court’s recent cases, Goldstein suggested that it would make sense for the court to adjust the details of its rules for specific jurisdiction (a state’s power to hear a case based on its connection to that particular dispute, the power at issue here) to accommodate its marked narrowing in Daimler AG v. Bauman of rules for general jurisdiction (a state’s power to hear a case based on its connection to the defendant). Raising that topic got the attention of Justice Ruth Bader Ginsburg (the author of the Daimler opinion), who pointedly remarked that “[w]hat you’re suggesting is that the Court was wrong in … Daimler” and added that this case could be viewed as “an attempt to reintroduce general jurisdiction, which was lost in Daimler, by the back door.” As noted here, the discussion of Daimler continued during the next hour’s argument in BNSF Railway Co. v. Tyrrell, in which several justices seemed set on reaffirming or extending Daimler. To the extent that same intuition carries over to this case, it poses a challenging hurdle for the plaintiffs.

At the end of the day, the argument makes it clear that the justices will tread cautiously here, recognizing the broad systemic implications of pronouncements about the constitutional limits on judicial authority. The combination of caution with the intricate framework of the relevant cases suggests that we will be waiting several weeks for a resolution in this one.