Under the Fifth Amendment, “private property” cannot be “be taken for public use, without just compensation.” The doctrine of regulatory takings famously states that if government regulation of a property interest “goes too far, it will be recognized as a taking.” The doctrine has been around for almost 100 years, but some of its defining features remain unsettled. One key dilemma, commonly known as the “denominator problem,” is how to define what property is at issue. The Supreme Court has opaquely instructed courts to look at the effect of a regulation on “the parcel as a whole,” but has acknowledged that defining the parcel has remained a “difficult, persisting question.” When real property is at issue, is the parcel the single lot whose use is most affected by the challenged regulation, the owner’s contiguous holdings, or some broader set of the owner’s affected interests? Is the parcel defined by state lot lines, by other state land use regulations, or by other criteria? The answers matter: A regulation’s burden might look severe when measured against one segment of a property, but slight when compared to a larger property interest. In Murr v. Wisconsin, set for argument next Monday, the court will address the denominator problem once again. 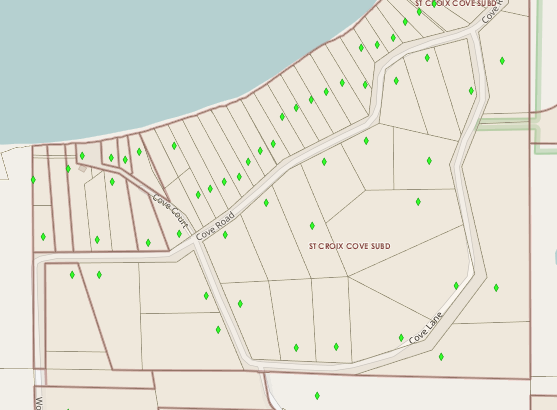 Petitioners, the Murrs, are four siblings who own waterfront property on the St. Croix River in Wisconsin. The Murrs’ parents purchased the property in the 1960s as two separately recorded parcels, known as Lot E and Lot F. The parents held title to Lot E in their own name, and to Lot F (on which they built a cabin) in the name of their plumbing business. In 1976, these lots became subject to new county zoning requirements, adopted for the river area pursuant to state legislative and regulatory directives. Those standards made three key moves that are common in zoning ordinances around the country: They established minimum lot sizes for different zones in the river’s vicinity; grandfathered in pre-existing lots rendered “substandard” by the new requirements; and created an exception to the grandfather clause – a “merger” provision – for adjacent lots under common ownership. Under these standards, the parents’ lots became substandard – that is, smaller than the required minimum lot size. But because the parcels were formally in separate ownership, they were protected by the grandfather clause.

The plot(s) thickened in 1994 and 1995. In two separate conveyances in those years, the Murrs’ parents conveyed the respective parcels to the siblings as a group, bringing the parcels under the siblings’ common ownership. (The briefing now indicates that the parents also owned both parcels at some point in the 1980s, but that was not part of the record below.) The siblings’ common ownership triggered the merger provision. In turn, it precluded the plan the siblings proposed in 2004: to sell Lot E and use the proceeds to upgrade the cabin on Lot F. A county board denied the Murrs a variance, and after losing that appeal, they asserted an unconstitutional taking.

The state courts rejected the takings claim. They conceived of the denominator as Lots E and F together. They explained that when the affected property was considered that way, the Murrs could still make plenty of use of their land. The siblings could keep both lots and locate their cabin on either lot, or they could sell the two lots together. They just could not treat the land as two separately developable parcels – and that limitation alone was not a taking. The Murrs demurred, and the justices agreed last January to hear the case.

The Murrs argue that the correct denominator is presumptively “the single parcel alleged to be taken,” defined by recorded lot lines. In this case, that is Lot E alone – it is Lot E that the state’s merger law prevents them from selling, and thus Lot E that they allege has been taken. The Murrs stress that Penn Central v. New York City and later cases train analysis on the “single parcel” at issue, and they argue that a parcel’s recorded boundaries are the most reliable identifier. They add that there is no practical reason to lump Lot F in with Lot E for analysis; Lots E and F “were purchased at different times, for different purposes, and have never been considered as a single economic unit or jointly developed.”

The respondents – the state of Wisconsin and St. Croix County, supported by the U.S. solicitor general as amicus – argue that the relevant “single parcel” is Lots E and F together. However, each proposes a somewhat different denominator analysis. Citing the court’s decision in Lucas v. South Carolina Coastal Council, Wisconsin argues that it is not just lot lines, but “all of a state’s laws,” that shape the denominator. Specifically, the denominator is defined by a property owner’s objectively reasonable expectations, as informed by state property law. And under the state’s merger law, the Murrs took title in 1995 “to a single merged parcel, not two separate lots.”

The county similarly criticizes the Murrs for trying to “pick and choose among relevant state laws that define the scope of their property rights.” The county also stresses that merger provisions are so prevalent and well-settled that they are surely part of the body of state property law that shapes the denominator. As the county puts it, “anyone remotely knowledgeable about land use law knows the implications of owning adjacent, substandard lots.” The county argues further that no taking occurred regardless of the denominator: The Murrs have plenty of reasonable options for Lot E, even if they hinge on the involvement of Lot F.

Finally, the United States argues that the correct approach is a case-by-case inquiry informed by fairness and justice. The solicitor general states that spatial, temporal and functional factors support treating both Lots E and F as the correct parcel here, because the lots are contiguous, were acquired close in time, and may be used as an integrated whole. Indeed, as Wisconsin points out, the parcels have been used in tandem to some extent – Lot F contains the cabin, and Lot E contains a volleyball court for guests’ use and the propane tank for the cabin. (While the state and county both propose a more rule-like test, each also agrees with the solicitor general that the Murrs fail under a case-by-case analysis as well.)

All told, then, the principal briefs offer the court several different approaches to resolving the denominator problem. As the briefing observes, each has some drawbacks – as befits an issue that has challenged courts and scholars for almost a century. The Murrs’ heavy reliance on state lot lines seems to turn a blind eye to the bigger picture, including the merger provision that had been in place for decades when they took title. At the same time, however, the state’s and county’s apparent suggestion that the denominator is entirely a function of all of a state’s property law seems in tension with both precedent and the federal nature of the protection against uncompensated takings. As an amicus brief of property law professors urges, leaving the takings clause to the whims of state property law may not track the “federal constitutional objective of achieving fairness and justice.” To be sure, the state and county could prevail even if state law as a whole does not automatically define the denominator. But if the court is to pick and choose among state laws that count, it will need a principle to guide it in choosing between the Murrs’ position and that of the state and county. Or it will need to treat state law as just one component of an ad hoc inquiry; that is essentially the solicitor general’s position. But that sort of case-by-case assessment, while promising for doing justice in any given case, might exacerbate the uncertainty and unpredictability that have plagued regulatory takings law.

It is worth noting that the court delayed the argument in this case for roughly six months; many commentators speculated that the court was awaiting a ninth justice to ensure that the case’s contentious issues did not produce a deadlock. As it turns out, only eight justices will hear argument next Monday. (Judge Neil Gorsuch’s confirmation hearing is scheduled to begin the same day.) In the absence of a ninth member, the court may well gravitate toward a narrow holding. Such a holding might rest, as the state and county and some of their amici urge, on the particularly well-settled nature of state-law merger provisions, or it might rest on the unusual facts of this case. It could even conceivably rest on vehicle problems or other procedural grounds. In the end, this may not be the year for the conclusive enumeration of the denominator’s elements.