Argument analysis: Focusing on the facts in 1984 D.C. murder case

Most oral arguments at the Supreme Court focus heavily on principles of law. But today in Turner v. United States and Overton v. United States, the discussion focused instead almost exclusively on the facts – such as the size of the garage in which the body of 48-year-old Catherine Fuller was found and the scenarios that prompted two of the men who allegedly participated in Fuller’s murder to plead guilty and testify for the prosecution. The advocacy in the case was excellent all around, but the justices were curiously subdued, making it difficult to predict how they might rule on the question before them: whether the rights of seven other men who were convicted for Fuller’s murder (an eighth man died in prison) were violated by the prosecution’s failure to turn over evidence that might have cleared them.

It has been over three decades since Fuller was robbed, viciously beaten and sodomized in the District of Columbia’s H Street NE neighborhood. But all three lawyers who argued today displayed such an impressive command of the facts of the case that it sometimes seemed as if the crime had occurred in October 2016, rather than 1984, with the eight justices serving as a trial court. 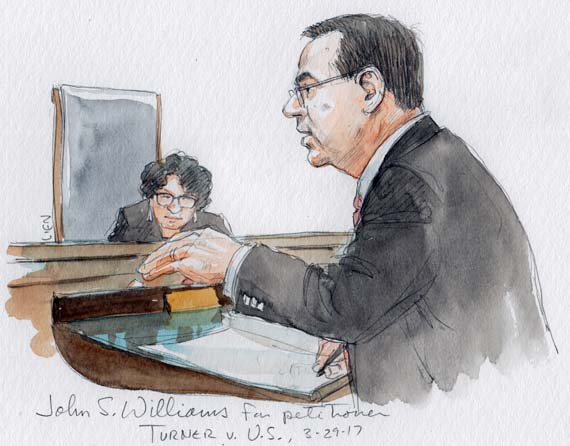 Arguing on behalf of Christopher Turner and five of the other men who were convicted at trial, attorney John Williams concentrated on the government’s failure to provide defense lawyers with information about another possible suspect: James McMillan, whom witnesses had seen “acting suspiciously” and with “something under his coat” in the alley where Fuller’s body was found. McMillan was later convicted of two other assaults that month on women in the H Street neighborhood, as well as a 1992 murder that, defense lawyers say, resembled Fuller’s. If defense lawyers had had that information, Williams emphasized, they could have presented a theory of the case that was an alternative to the group attack described by prosecutors: McMillan committed the crime, either alone or with a single accomplice. There is a reasonable probability, Williams argued, that if the jury had heard that theory it would have had enough reasonable doubt to acquit the men.

Justice Samuel Alito saw that argument as a tough sell. To succeed on the “alternative suspect” theory, he contended, the defendants would have had to convince the jury that two of the government’s main witnesses had pleaded guilty and been sentenced for a crime that they didn’t commit, much less witness, and that the government’s other witnesses were also perjuring themselves. Moreover, he added, it is hard to see how a defendant could argue simultaneously that McMillan and perhaps one other person had committed the crime and that even if the murder was instead the result of a group attack, as prosecutors claimed, the defendant was not part of that group.

Justices Anthony Kennedy and Sonia Sotomayor also saw flaws in the details of Williams’ argument. Kennedy asked Williams why, if McMillan had committed the murder, he would have been “hanging around” the scene. After offering two possible explanations (that McMillan may have been trying to get rid of the object used to sodomize Fuller or that he may have returned to retrieve evidence left in the garage that might have identified him), Williams theorized that, as a more general matter, the justices shouldn’t give too much weight to McMillan’s possible presence because “criminals aren’t clever.”

Sotomayor agreed with Williams that McMillan’s 1992 murder was similar to Fuller’s, but she observed that any “alternative suspect” theory would have rested on the October 1984 assaults for which he was convicted, which bore less of a resemblance to Fuller’s murder. Because the men who went on trial for Fuller’s murder were hardly angels themselves, she noted, and had their own criminal records, how would McMillan be “such a potent alternative” suspect? Williams countered that McMillan’s October 1984 crimes were indeed “very violent” – so much so that one victim, D.C. Councilwoman Nadine Winter, thought that McMillan was trying to kill her.

Arguing on behalf of Russell Overton, Deanna Rice focused on the prosecution’s failure to turn over key evidence about one witness, Carrie Eleby. That omission mattered, she stressed, because the jury had repeatedly deadlocked with regard to the charges against Overton, suggesting that additional evidence that undermined Eleby’s credibility might have made a difference in the jury’s decision. Rice explained that, although the government had given Eleby’s grand jury testimony to the defense attorneys, it did not provide them with information indicating that Eleby had encouraged another witness to lie. When Justice Elena Kagan noted that the government had characterized Eleby’s actions as creating false corroboration for something that was true, Rice responded that the other witness had had no independent basis for her testimony. That led to one of the lighter moments of today’s argument, as Kagan told Rice that she was being “kind.” “Creating false corroboration,” Kagan suggested, “is fabricating evidence.” 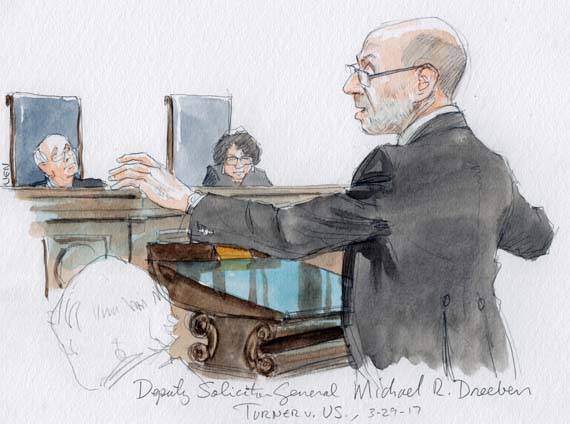 Arguing on behalf of the government, Deputy Solicitor General Michael Dreeben assured the court that it could “have confidence in the integrity of these verdicts.” Even if prosecutors had provided the defendants with the information about other possible suspects and the defendants had pursued the “alternative suspect” theory, he contended, there was no reasonable probability that the additional evidence would have created reasonable doubt for the jury.

But Justice Ruth Bader Ginsburg chided Dreeben that defense attorneys wouldn’t have needed to put “all [their] marbles” on McMillan. Unlike Alito, she seemed to believe that it might be enough for a defense attorney to say that McMillan was the perpetrator, but that even if he wasn’t responsible, that particular attorney’s client was not there.

Kagan agreed. She reminded Dreeben that without an “alternative suspect” theory the case boiled down to a “circular firing squad” in which each defendant pointed a finger at someone else. And that, she concluded, “created the worst of all possible worlds.” And, Kagan added, one defense attorney – Michele Roberts, whom Kagan described as having “incredible expertise” – had testified that, if she had known of the evidence implicating McMillan, she “certainly would have run” with the “alternative suspect” theory.

Sotomayor also weighed in. She noted that the jury had acquitted two of the original defendants and nearly deadlocked on two others. Given that something seemed to be holding up the jury, she suggested, why wouldn’t it take very little to say that even some of the suppressed evidence would have made a difference for those two defendants?

Dreeben – who displayed an extraordinary command of the case, right down to the different defendants’ “street names” and the geography of the H Street neighborhood – countered that the connections between McMillan and Fuller’s murder were “tenuous” at best. It is not surprising that witnesses placed McMillan in the vicinity of the crime, he observed, because he lived there. And Dreeben characterized the October 1984 crimes as mere “snatch and grab” purse snatchings; indeed, he suggested, the government would have had difficulty introducing them as evidence if McMillan had been charged with Fuller’s murder. Dreeben also pushed back against the idea that the 1992 murder for which McMillan was convicted resembled Fuller’s: Both were “horrific crimes,” he agreed, but they were actually quite different.

As I noted in my preview, the fact-intensive nature of the case and the justices’ decision to substitute a simple question presented – whether the men’s convictions “must be set aside” – suggested that they were likely to rule for the defense. That may still be true, but the justices were hard to read at today’s argument. At a minimum, this may turn out to be a closer and harder case than any of us expected.