The unanimous first opinion of the term: A vacated conviction may be considered in assessing the preclusive double jeopardy effect of mixed acquittals and convictions

Today the first-argued case of the term yielded the first full opinion of the term. In Bravo-Fernandez v. United States, the court unanimously concluded that when a jury has returned inconsistent verdicts in a multi-count criminal case – acquittals on some counts but a conviction on another – the fact that the conviction count has been vacated on appeal due to jury instruction error does not bar retrial on that count under the double jeopardy clause. Because “inconsistent verdicts shroud in mystery what the jury necessarily decided,” the court concluded, the issue preclusion doctrine of Ashe v. Swenson cannot be applied. Justice Ginsburg wrote for the court, and Justice Thomas provided a solo concurrence. 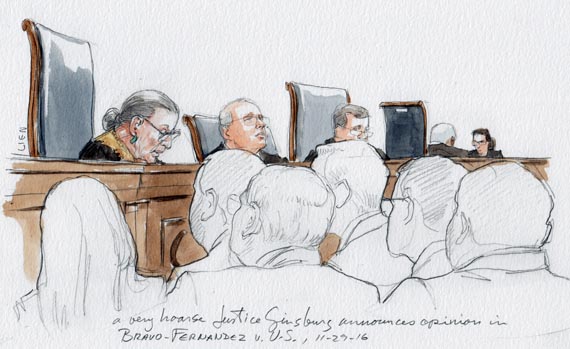 Facts and proceedings below

As previewed, Bravo and his co-defendant Martinez were indicted in separate counts for federal program bribery, conspiracy to commit that bribery, and traveling in furtherance of the bribery. (There were also other counts not relevant to the decision.) Because the defendants conceded that they had in fact both agreed and travelled, “the only contested issue at trial” was whether the offense of bribery had in fact been committed. After a three-week trial, the jury acquitted on the conspiracy and travel counts but returned a verdict of guilty on the substantive bribery count. Then on appeal, the U.S. Court of Appeals for the 1st Circuit vacated the conviction on the bribery count, ruling that the jury instructions had erroneously permitted conviction on a “gratuity” theory although the relevant statute permits conviction only for quid pro quo bribes, not gratuities. (In a pointed footnote, the court noted that this holding was “contrary to the rulings of most circuits.”) But because the evidence easily would have been sufficient to sustain a bribery conviction under proper instructions, the case was remanded for retrial.

On remand, however, Bravo and Martinez argued that the double jeopardy clause prohibited their retrial, because the jury’s acquittals demonstrated that the jury had “necessarily decided” that they had not committed bribery. They invoked the familiar law-school chestnut of Ashe, which held that when a defendant was acquitted of robbing one player in a six-player poker game, and identity was the only disputed issue, the government was precluded from trying the defendant for the same robbery of the other five players. This preclusive doctrine, called “collateral estoppel” in Ashe but referred to today (“more descriptive[ly]” in the court’s view) as “issue preclusion,” was extended in 2009 in Yeager v. United States to acquittals that are accompanied by a hung jury “on a different count turning on the same critical issue.” A jury’s failure to reach a verdict is a “legal nullity,” the court concluded in Yeager, which cannot be considered in assessing what the jury “necessarily decided,” so acquittals can collaterally bar retrial even on the hung count. Bravo and Martinez argued that a vacated conviction should be treated the same way as the hung count in Yeager, that is, as a legal nullity not to be considered, in which case the jury’s acquittals should control.

The district court, and, on interlocutory appeal, the 1st Circuit, disagreed. They noted that the Supreme Court has also ruled, in United States v. Powell, that when acquittal and conviction verdicts in the same case are logically inconsistent, both verdicts stand. “Inconsistent verdicts make it impossible to determine what the jury necessarily decided,” the 1st Circuit concluded based on Powell. Because convictions that are vacated are still a “reality” that is part of the “complete record” that Ashe directs courts to consider in a “practical appraisal,” Powell rather than Yeager should control, and a retrial on the vacated conviction count, even if inconsistent with acquittals on related counts, should not be constitutionally barred. This conclusion was in accord with three other courts of appeals, but conflicted with at least one state supreme court.

In a sixteen-page opinion – still lengthier than perhaps was needed because it surveys much double jeopardy precedent as well as the civil doctrines of claim and issue preclusion – the court ruled that defendants have “the burden of demonstrating that the jury necessarily resolved in their favor” critical issues that might bar retrial, and that “a defendant cannot meet that burden where the trial yielded incompatible jury verdicts.” “The ordinary consequence of vacatur … is a new trial shorn of the error” on which vacatur was based – not preclusion under the double jeopardy clause — under a “continuing jeopardy rule” that “reflects the reality that the criminal proceedings have not run their full course.” (The court did not grapple – nor did it need to — with the logical coherence of a “continuing jeopardy rule” in contrast to another settled rule, quoted earlier in its opinion, that “the Government cannot secure appellate review of an acquittal, even one based upon an egregiously erroneous foundation.” Needless to say, the constitutional law of double jeopardy is, as scholars have noted, a “Sargasso Sea” of arguably inconsistent rationales.)

“That petitioners’ bribery convictions were later vacated for trial error does not alter our analysis,” said the court, because “realism and rationality” are required under Ashe, and even a vacated conviction is a “reality” that should be “appropriately considered.” Here, the inconsistency in the jury’s verdicts could have been due to jury leniency and compromise rather than “necessarily decided” factual decisions about the defendants’ innocence. These are factors that can forestall issue preclusion in the civil arena – and so too here.

Interestingly, Justice Ginsburg did not discuss the much-briefed argument that because of the modern “proliferation of overlapping statutory offenses,” the government can almost always charge multiple counts that turn on the same basic facts, and that a strong preclusive doctrine in multi-count criminal cases is needed to protect against government overreaching. But silence on this perhaps controversial point seems unsurprising, because a narrow resolution based on straightforward application of precedent was unanimously available in this case.

In addition to providing an extensive recitation of double jeopardy doctrine, Ginsburg’s opinion carefully noted two possible “safe harbors” in which double jeopardy would apply even when conviction verdicts are returned but subsequently vacated on appeal. First, if a conviction is vacated for insufficient evidence, a defendant “could not be retried … of course,” because reversal for insufficient evidence “is equivalent to an acquittal,” which, as previously noted, is unreviewable. Similarly, if the error that caused vacatur “could resolve the apparent inconsistency in the jury’s verdicts,” a retrial also would not “be tolerable,” because the inconsistency which “shrouds in mystery what the jury necessarily decided” would be wiped away.

But neither of these two safe harbors applies here. Although Bravo and Martinez are protected absolutely from retrial on the acquitted counts, and they also receive “the benefit of their appellate victory” by gaining a new trial on the count on which the jury convicted them, they simply “cannot establish the factual predicate necessary” to gain the complete preclusive effect of Ashe.

In a two-page concurrence, Justice Clarence Thomas noted that Justice Antonin Scalia dissented in Yeager (in an opinion that Thomas joined), arguing that the “original meaning” of the double jeopardy clause comprehended no “issue-preclusion prong” at all. As he typically does in a case where he disagrees with precedent on which the majority relies, Thomas wrote that “[i]n an appropriate case, we should reconsider the holdings of Ashe and Yeager.” No other justice joined him (at least not expressly) in this concurring view.

The justices generally like to start the term with a unanimous opinion, and Bravo-Fernandez provides an accessible vehicle that will not be an earth-shattering addition to double jeopardy jurisprudence. Rather, the outcome is virtually dictated by the precedents of Yeager, Powell and Ashe. It seems doubtful to me that trial prosecutors actually base their charging decisions on possibilities that seem remote even on appeal – there are many other reasons for a prosecutor to file multiple counts based on the same events. This holding is unlikely to play much of a role in that pretrial decisionmaking process. Meanwhile, Ginsburg’s opinion does a good job of preserving the protective double jeopardy doctrines that are currently in place. The more defendant-friendly justices may be keeping their powder dry for further battles that seem likely in the court’s future.

Recommended Citation: Rory Little, The unanimous first opinion of the term: A vacated conviction may be considered in assessing the preclusive double jeopardy effect of mixed acquittals and convictions, SCOTUSblog (Nov. 29, 2016, 9:15 PM), https://www.scotusblog.com/2016/11/the-unanimous-first-opinion-of-the-term-a-vacated-conviction-may-be-considered-in-assessing-the-preclusive-double-jeopardy-effect-of-mixed-acquittals-and-convictions/