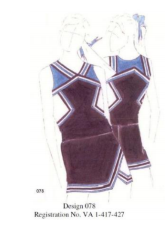 Star Athletica v. Varsity Brands presents the justices with a classic intellectual-property problem: the use of copyright to protect functional objects. The issue in this case is whether the respondent, Varsity Brands, has a protectable interest in the design of cheerleading uniforms arguably copied by the petitioner, Star Athletica.

The case starts from Section 102 of the Copyright Act, which protects “original works of authorship fixed in any tangible medium of expression.” Under Section 113 of the act, “the exclusive right to reproduce a copyrighted … work … includes the right to reproduce the work in or on any kind of article, whether useful or otherwise.” At the same time, it has been recognized since the 19th century that copyright protection extends only to the “expressive” content of the work. It does not reach functional ideas or objects; only patents can protect those attributes of a creative work.

Courts have struggled for decades to define the line between the copyright-protected expressive aspects and the utile aspects of tangible objects. The leading case is the Supreme Court’s 1954 decision in Mazer v. Stein, which upheld copyright protection for a statuette that was intended for use, and was used, as the base for a table lamp. The court explained that the Copyright Act protected the expression – the particular statuette in question – but not the idea of using “statuettes of human figures in table lamps.” Thus, competitors could make table lamps with other human figures as bases; they could not, however, copy the particular sculptural work created by the plaintiff in Mazer.

The court has not revisited this topic often, but lower courts have struggled in articulating consistent tests for the relatively fact-specific problem of drawing the line between the expressive (protected) and functional (unprotected) aspects of useful objects. Among other things, it has become increasingly obvious that broad protection for industrial designs provides considerable market power for industry leaders. This case, for example, involves a relatively small firm (Star Athletica) founded by a former employee of the dominant industry leader Varsity Brands; the market niche of the smaller firm seems to be selling garments similar to those of the market leader at substantially lower prices.

Against that backdrop, the insurgent Star Athletica argues that copyright protection categorically should exclude garments. Because Congress has considered many times adopting a statute to protect industrial designs, but has never done so, Star Athletica argues that courts should adopt a presumption against affording protection to any garment. In Star Athletica’s view, protection should be available only if the design feature in question is entirely separate from the useful functions of the garment. In this case, because the principal design features – stripes, chevrons, zigzags and the like – are essential to the use of the article as a cheerleading uniform, they cannot be regarded as conceptually “separable” from the uniform. If they are not separable from the uniform, then they can receive no copyright protection.

Varsity Brands, by contrast, argues that a work is conceptually separable if it can exist in a tangible medium other than the uniform. Because a graphic design can exist on a piece of paper, or any piece of fabric, Varsity Brands argues for a bright-line rule protecting all two-dimensional designs. For Varsity Brands, the only hard cases are those that involve three-dimensional designs, because a three-dimensional object (such as a statue) can hardly exist apart from its shape, and if its shape has functional attributes, it then becomes difficult to determine whether a copier has copied the expressive aspects or merely the functional aspects of the shape.

The solicitor general’s brief in support of Varsity Brands is powerful. Among other things, it shows that the U.S. Copyright Office has had an unbroken tradition of accepting registration of graphic designs used on clothing for many decades. The best part of the brief is a series of images of clothing designs that reproduce famous works of art. Demonstrating that “a picture is worth a thousand words,” the brief displays dresses that include images immediately identifiable as taken from paintings by Vincent van Gogh and Gustav Klimt. The garments speak for themselves because they are so indisputably “copied” from the expressive aspects of the famous paintings that the reader’s overwhelming intuition is that the dresses must violate the artists’ copyrights. To be sure, Star Athletica’s legal rule would allow protection for those dresses (because the paintings plainly exist separately), but my guess is that the presentation will leave the justices doubtful about erecting any presumption against the protection of designs on garments. And once it is clear that the designs of garments are protectable, the court presumably will be reluctant to adopt a rule that limits protection to designs that are “high” art (like the Van Gogh and Klimt dresses) as opposed to “low” art (like Varsity Brands’ cheerleading uniforms).

Under the Roberts court, it is usually quite difficult for either party to win outright in a case like this one, which essentially asks the justices to articulate a form of words that draws a line to resolve a commonly arising fact-intensive dispute. The usual practice of the court in such cases is to do its best to articulate a test and then remand the case to the lower court for application in the first instance. This has been especially true in intellectual-property cases, in which the court has taken a strongly minimalist approach, plainly concerned that broad pronouncements might cause undue disruption in rapidly developing markets.

To be sure, the solicitor general and Varsity Brands present some bright-line rules that would make it easy for the court to select a rule under which the design would be so plainly protectable as to obviate any need for a remand. We should know a lot more about the inclination of the bench after the argument. It will be interesting to see if the justices’ frustration with the imprecision of ideas about separability will bleed over from the Samsung v. Apple argument on the last day of the October session (which I also covered) to this argument on the first day of the November session.