Argument preview: Can an appellate court consider a challenge to the amount of a restitution award as part of an appeal of the underlying sentence?

When defendants are convicted of federal crimes, district courts will often enter two different judgments: an initial judgment of conviction and sentence, and a subsequent, amended judgment of restitution after a hearing under the Mandatory Victims Restitution Act. In its 2010 decision in Dolan v. United States, the Supreme Court held that, so long as the initial judgment includes a deferred order of restitution, an amended, post-hearing judgment fixing the specific amount of restitution does not have to comply with the MVRA’s 90-day deadline for restitution awards, because the latter judgment was simply attaching an amount to the restitution already ordered by the former judgment. And although the court in Dolan noted the potential consequences of the interaction of such bifurcated restitution orders with appellate time limits, it left resolution of such questions “for another day.” 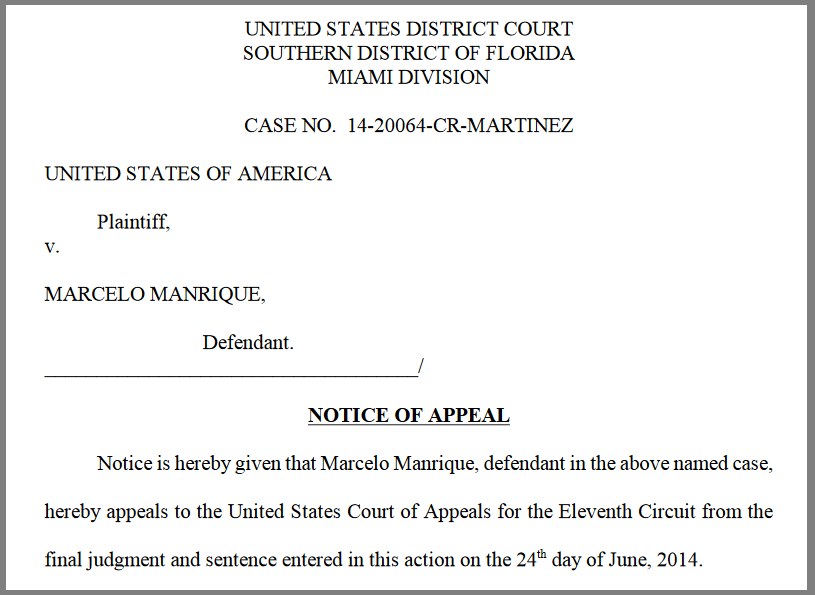 That day appears to have come, with the justices set to hear argument next Tuesday in Manrique v. United States. Marcelo Manrique pled guilty to one count of possession of material involving a minor engaging in sexually explicit conduct, in violation of 18 U.S.C. § 2252(a)(4)(B) and (b)(2), and was sentenced to 72 months’ imprisonment; a life term of supervised release; and deferred restitution – recorded as $0 in the initial judgment, but determined after a hearing to be $4,500. Manrique filed a notice of appeal from the initial sentencing judgment, but not from the amended post-hearing judgment. This shortcoming, the U.S. Court of Appeals for the 11th Circuit ruled on its own motion, deprived the appeals court of jurisdiction to consider a challenge to the appropriateness of the restitution award. Manrique asked the Supreme Court to review the lower court’s decision.

In his brief on the merits, Manrique makes two principal arguments against the appellate court’s reasoning: First, he contends that Federal Rule of Appellate Procedure 4(b)(2) provides that “a notice of appeal filed after a decision is announced, but before judgment is entered on the decision, matures or springs forward to embrace a later-filed judgment.” Thus, Manrique argues, “[w]hen the amended judgment is entered that completes the initial judgment, it merges into the original incomplete judgment, so that the two together become the final judgment.” As Manrique explains, such a reading of Rule 4(b)(2) “is consistent with the Restatement (Second) of Judgments, as well as the decisions of the circuits holding that a single notice of appeal perfects appeal of both judgments, even if it is filed before entry of the amended judgment.” In contrast, he contends, failure to apply Rule 4(b)(2) to amended judgments in restitution appeals would create a “trap for the unknowing litigant,” the very type of trap “the Court effectively abolished by the 1993 amendments to Rule 4.”

In any event, Manrique argues, any irregularity in his notice of appeal did not categorically deprive the court of appeals of jurisdiction, because he did file a notice of appeal. Therefore, he maintains, any remaining timing issue is governed by rule, not statute – and so should be resolved under the “substantial prejudice” framework of Federal Rule of Criminal Procedure 52(a). And because the government would suffer no prejudice – let alone substantial prejudice – from merging Manrique’s challenge to the restitution award into the rest of his timely appeal (since, among other things, it was properly raised and fully briefed before the 11th Circuit), that challenge should have been allowed to go forward.

In response, the solicitor general argues that Manrique’s reading of Rule 4(b)(2) is unsupported by its text – “which applies only where a notice of appeal is filed ‘after the court announces a decision, sentence, or order’ . . . but before the decision is formally entered on the docket.” Manrique, in contrast, had filed his notice of appeal before the district court issued its decision (and amended judgment) imposing $4,500 in restitution. Moreover, the government asserts, Manrique’s argument “would also create some practical and conceptual difficulties in some deferred-restitution cases and could interfere with the government’s opportunity to cross-appeal in other cases.” As for Manrique’s Rule 52(a) argument, the solicitor general contends that the rule “does not apply where, as here, a litigant simply fails to take the steps necessary to create appellate jurisdiction.”

One of the themes undergirding both briefs is the extent to which the problem in this case may be one the court created – or, at least, exacerbated – in Dolan. After all, the Dolan majority agreed that “strong arguments favor the appealability of the initial judgment irrespective of the delay in determining the restitution amount.” More subtly, the animating premise of the Dolan decision was that the actual restitution amount – the subject of the amended judgment – was less significant for purposes of the MVRA’s time-limit than the trial court’s recognition in its original judgment that some restitution was required. If Dolan meant what it said, then merging a challenge to the actual restitution award into a properly appealed challenge to the underlying judgment of conviction and sentence seems consistent with both the spirit of Dolan and of Rule 4(b)(2). The government’s position, in contrast, appears to depend on viewing the amended judgment as entirely distinct from the original judgment – and, thus, necessitating its own notice of appeal in order for the court of appeals to exercise jurisdiction. Which of these positions holds more favor among the justices may well depend upon just how convincing the court finds the government’s concerns about prejudicing its ability to pursue cross-appeals in cases like Manrique’s.

Recommended Citation: Steve Vladeck, Argument preview: Can an appellate court consider a challenge to the amount of a restitution award as part of an appeal of the underlying sentence?, SCOTUSblog (Oct. 4, 2016, 9:33 AM), https://www.scotusblog.com/2016/10/argument-preview-can-an-appellate-court-consider-a-challenge-to-the-amount-of-a-restitution-award-as-part-of-an-appeal-of-the-underlying-sentence/