Argument analysis: Looking for a line in service dog case

The most famous goldendoodle in America was outside the Supreme Court today, accompanied by some of his service dog friends. A Michigan school district’s refusal to allow Wonder, a trained service dog, to go to school with E.F., a student who was born with cerebral palsy and whose mobility is impaired, was the catalyst for the first oral argument of the day, in Fry v. Napoleon Community Schools. Stacy and Brent Fry, E.F.’s parents, filed a lawsuit in federal district court, arguing that the school district violated two federal civil rights laws – the Americans with Disabilities Act and the Rehabilitation Act – when they barred Wonder from E.F.’s school. 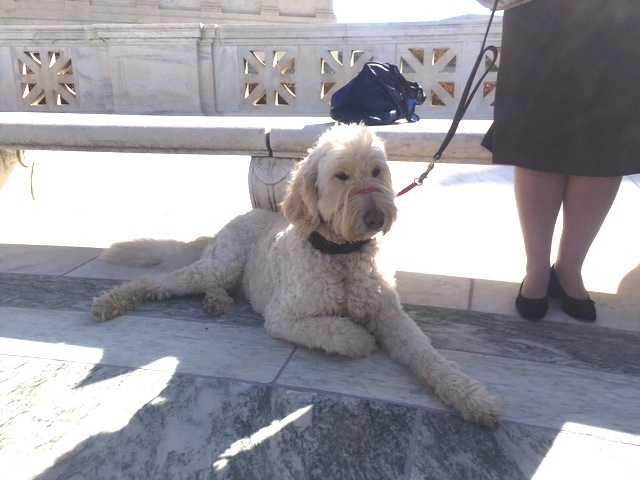 The question before the justices today was whether the Frys could take their case directly to federal court, or whether they were first obligated to go through state administrative proceedings under the Individuals with Disabilities Act, a federal law that requires states to provide students with disabilities with a “free and appropriate public education.” The school board maintains, and the lower courts agreed, that the Frys must go through the administrative proceedings first. But Samuel Bagenstos, the Frys’ lawyer, told the justices today that there is no such requirement, because the Frys are seeking relief that has nothing to do with E.F.’s education and is not available under the IDEA: money damages for the “social and emotional” harms that E.F. suffered from not having Wonder at school – for example, the humiliation of having to use the toilet with the door to the stall open and several adults watching.

During the oral argument, there seemed to be a fairly solid consensus among the justices that this is a classic case in which a family should not be required to go through administrative proceedings, because the Frys are seeking damages for purely emotional harms, which Justice Sonia Sotomayor listed in some detail. How, Sotomayor asked Neal Katyal, who argued on behalf of the school board today, would the IDEA compensate the family for these harms? 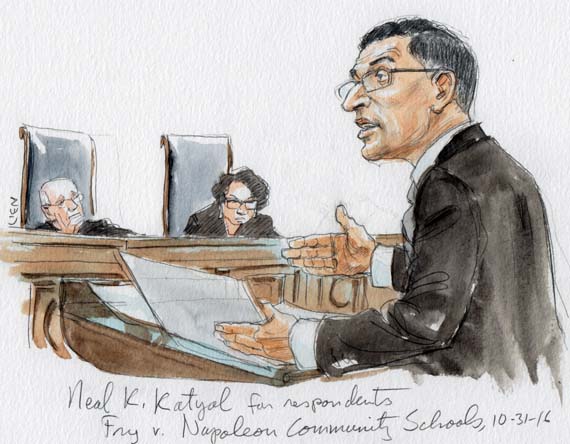 Katyal pushed back valiantly against the notion that the Frys’ particular case is an easy one. He emphasized the family’s request, made in its complaint, for a ruling by the trial court that the school’s refusal to accommodate Wonder violated the ADA and the Rehabilitation Act. That effectively asked the court to rule that excluding Wonder from E.F.’s Individualized Education Plan, the legal document that is developed under the IDEA for each child with special needs, violated her rights, he said – the kind of issue that is at the core of the IDEA.

But the justices seemed unpersuaded. Sotomayor, herself a former trial judge, urged Katyal to look at the complaint as a whole. The Frys, Sotomayor suggested, are not asking that the court issue a ruling on anything related to E.F.’s education itself. In fact, she noted, E.F. no longer even attends school in the school district. Justice Elena Kagan added that the Frys wanted Wonder to be available to help their daughter with things entirely unrelated to her education. And she pointed out that the Frys could have brought a very similar lawsuit if their daughter had been barred from bringing Wonder into a public library. The fact that the IDEA exists for schools, she emphasized, doesn’t mean that the ADA and Rehabilitation Act don’t apply to schools at all. 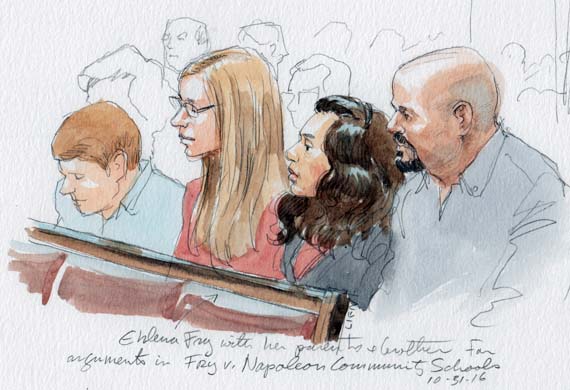 Petitioner E.F. with her parents and brother (Art Lien)

But even if the justices seemed sympathetic to the Frys’ situation, their ruling will extend far beyond that family’s case. The justices therefore puzzled over how to draw the line for future cases. One recurring concern, voiced early in the oral argument by Justice Anthony Kennedy, but also by Chief Justice John Roberts, was the prospect that strategic pleading in a complaint would allow families to bypass the exhaustion requirement in true IDEA cases simply by tacking on a request for damages under the ADA and Rehabilitation Act.

Bagenstos tried to reassure the justices that such an opportunity will often not be available, because not all cases will involve both the IDEA and the ADA, but Justice Stephen Breyer remained skeptical. If we rule for the Frys, he posited, there will be many cases in which families can avoid the exhaustion requirement by suing for emotional harm, which would “seem to gut” the system that the IDEA carefully sets up. And, he observed, many cases that might otherwise reach a negotiated settlement in the administrative proceedings won’t go through those proceedings at all. 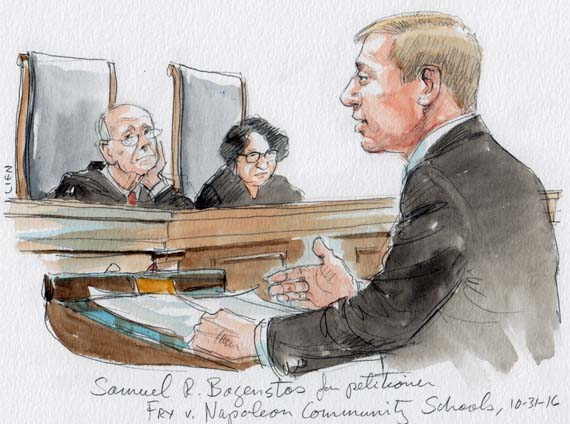 Bagenstos told Breyer that such a result would be precisely what Congress intended when it enacted the exhaustion requirement: Most parents will go through the IDEA process, but others, as in this case, will not. Roman Martinez, an assistant to the solicitor general who argued on behalf of the United States, emphasized that parents will choose the fastest option to get relief for their children, which will generally be state administrative proceedings rather than lawsuits in federal court.

Roberts also worried aloud about the possibility that a lawyer might advise her client to seek more leverage in negotiations with the school board by suing under the ADA for money damages. Bagenstos pushed back, telling the Chief Justice that the exhaustion requirement has no effect on a family’s leverage; they can simultaneously file a complaint under the IDEA and give notice of their intent to seek damages in a lawsuit down the road. The threat of extended litigation provides just as much leverage as going to federal court at the outset, Bagenstos suggested, but the Chief Justice did not agree.

The justices also pondered how their eventual ruling in this case would apply to future cases that, even if the families are not trying to circumvent the exhaustion requirement, are simply closer calls. During Bagenstos’ rebuttal, Sotomayor acknowledged that the Frys’ case “is an ideal situation.” But, she asked, what if the lawsuit had been filed while E.F. was still in school, and it sought (among other things) a change to E.F.’s educational plan?

Bagenstos responded that, under the Supreme Court’s case law, claims that did not implicate the IDEA could go forward, while claims related to the IDEA would “fall by the wayside.” (Katyal seemed to agree with this idea, although not with Bagenstos’ assessment of what claims would or would not be able to proceed.) But Sotomayor noted that a rule that created a “dual-track” system in each case could “raise hesitation” among some members of the court, including her.

If the justices’ quandary was how to draw a line that allowed “easy” cases like the Frys’ to go forward in federal court while ensuring that mine-run cases will begin with administrative proceedings, three possible solutions seemed to emerge. Roberts raised, and then Kagan returned to, the first possibility. You are making two arguments, she told Bagenstos, about why exhaustion of administrative remedies is not required in this case. The Frys are asking for damages for emotional distress, which are not available under the IDEA, and they are not alleging that E.F. was denied the “free and appropriate public education” to which she is entitled under the IDEA. In fact, Kagan noted, everyone agrees that E.F. did receive a FAPE. This is an “easy” case, Kagan hypothesized, because both these arguments are true. Roberts then chimed in, telling Bagenstos that a rule that exhaustion is not required if both criteria are met would address many of the potential problems with other cases. Bagenstos maintained that the Frys should prevail if either criterion is met, but he also readily agreed with Roberts that the Frys would prevail even if the court were to require that their case meet both criteria.

Breyer proposed two other possible rules. First, during Martinez’s argument, Breyer put forward what he seemed to regard as a simple rule: If it would be futile for a family to go through state administrative proceedings, then it would not have to. Martinez agreed with Breyer that the court could adopt such a rule. Or, Breyer suggested, courts could look at the gravamen of the complaint. If the heart of the complaint really focuses on the IEP, then a family will have to go through the administrative proceedings unless it would be futile to do so.

The eight justices will vote on the case at their private conference this week. But it will likely be next year before we learn whether the Frys (and Wonder) will indeed prevail, and if so on what ground.