Opinion analysis: Case on standing and concrete harm returns to the Ninth Circuit, at least for now

Although the Court’s ruling in the challenge to the Affordable Care Act’s birth-control mandate dominated today’s coverage of the Court, it wasn’t even the only underwhelming decision of the day.  Another one of today’s opinions, in Spokeo v. Robins, also proved to be somewhat of a disappointment.  It was a narrow victory for Spokeo, a company that operates a “people search engine,” in the lawsuit filed against it by Thomas Robins, a Virginia man who contends that Spokeo violated the federal Fair Credit Reporting Act when it published false information about him.  But the victory could be only temporary:  the Justices sent the case back to the lower court for it to take another look at whether Robins had alleged the kind of injury that would allow his suit to go forward, leaving open at least the possibility that Robins could prevail – and the case could even return to the Supreme Court. 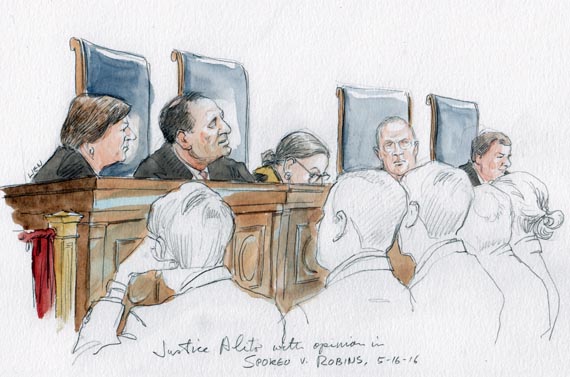 Robins contends that Spokeo published information indicating that he was wealthy, married with children, and worked in a professional or technical field.  In fact, though, he isn’t married and doesn’t have children; he was also out of work and looking for a job.  Those inaccuracies are a problem, Robins contends, because they could make him seem overqualified for the positions he was seeking or suggest that he might want a higher salary or be unwilling to relocate because of his responsibilities to his (non-existent) family.  But are those allegations enough to sue?

Robins filed a lawsuit in federal court, arguing that Spokeo’s publication of the inaccurate information about him violated the Fair Credit Reporting Act, which requires companies like Spokeo to “follow reasonable procedures to ensure maximum possible accuracy” of the information that it makes available for use in credit reports.  The district court dismissed Robins’s case on the ground that he lacked “standing” – the legal right to bring a case – because he could not show any actual harm from Spokeo’s publication of inaccurate information about him.  The U.S. Court of Appeals for the Ninth Circuit reinstated Robins’s case, but the Supreme Court granted Spokeo’s request to weigh in.

In a six-to-two decision written by Justice Samuel Alito, the Court instructed the Ninth Circuit to review the standing question again.  To have standing, it explained, Robins needed to show (among other things) an “injury in fact” from Spokeo’s publication of inaccurate information about him.  Moreover, the Court emphasized, the injury needed to be both “concrete and particularized.”  But the Ninth Circuit’s analysis, the Court reasoned, had “elided” those two requirements, concluding that Robins had alleged a “concrete” injury because it was particularized:  Robins had alleged that Spokeo “violated his statutory rights,” and that his interests “in the handling of his credit information are individualized rather than collective.”

The Court took pains to make clear that the requirement of a “concrete” injury is not “necessarily synonymous with ‘tangible.’” To the contrary, it observed, “intangible injuries can nevertheless be concrete.”  The question, then, becomes where and how to draw that line.  With FCRA, the Court noted, “Congress plainly sought to curb the dissemination of false information by adopting procedures designed to decrease that risk.” At the same time, it cautioned, not all violations of FCRA will automatically result in the kind of concrete harm that the Constitution requires for standing.   For example, the Court suggested, it is “difficult to imagine” how getting someone’s zip code wrong, “without more, could work any concrete harm.”

Because the Ninth Circuit had not analyzed whether the particular violations of FCRA that Robins alleged create a “degree of risk sufficient to meet the concreteness requirement,” the Court sent Robins’s case back for the lower court to do just that.  The Court did not, it reiterated, decide “whether the Ninth Circuit’s ultimate conclusion—that Robins adequately alleged an injury in fact—was correct.”

Justice Ruth Bader Ginsburg dissented from the majority’s ruling, in an opinion joined by Justice Sonia Sotomayor.  Although she agreed with much of the majority’s reasoning, she did not believe that the case needed to go back to the Ninth Circuit because — in her view — Robins had already alleged a concrete harm in his complaint:  “Spokeo’s misinformation,” she insisted, does cause “actual harm to [Robins’s] employment prospects.”

Spokeo and its supporters had no doubt hoped for a decisive, bright-line ruling that would sharply limit the ability of plaintiffs (and their lawyers) to bring lawsuits based on the violation of statutes like FCRA, particularly when it comes to the publication of inaccurate information on the Internet.  And while certainly relieved that his lawsuit would continue, at least for now, Robins and his allies likely would have preferred a broader ruling in his favor.  Today’s eight-Justice Court may have split the difference, but we could very well get something more definitive on these issues from a nine-Justice Court in the not-too-distant future.