Opinion analysis: A compromise, with real impact, on birth control

Without settling any legal issues surrounding the Affordable Care Act’s birth-control mandate, the Supreme Court on Monday nevertheless cleared the way for the government to promptly provide no-cost access to contraceptives for employees and students of non-profit religious hospitals, charities, and colleges, while barring any penalties on those institutions for failing to provide that access themselves.  Thirteen separate cases were sent back to federal appeals courts for them to issue new rulings on the questions the Justices left undecided.  One immediate issue is how soon the government can work out the technical arrangements to provide actual access to the contraceptive benefits.

The Court largely shifted to six federal appeals courts the task of ruling on the mandate’s legality — the task that the Court had agreed last November to take on itself in seven of the cases.  Five appeals courts had ruled in favor of the mandate, and one had ruled against.  All were ordered to re-think those outcomes in the wake of new positions that the two sides in the controversy had made in recent filings in the pending Supreme Court cases.

The Court acted through a per curiam (“by the Court”) opinion — announced in the Courtroom by Chief Justice John G. Roberts, Jr. — dealing with the cases the Court was reviewing, along with three orders extending the effect of that opinion to six other cases that the Court had not yet agreed to hear.  Justice Sonia Sotomayor, joined by Justice Ruth Bader Ginsburg, wrote separately to stress that the Court had not decided any of the legal questions it considered in the cases, under the lead case’s title, Zubik v. Burwell, and to caution lower courts not to read anything into the new opinion and orders about where the Court stands. 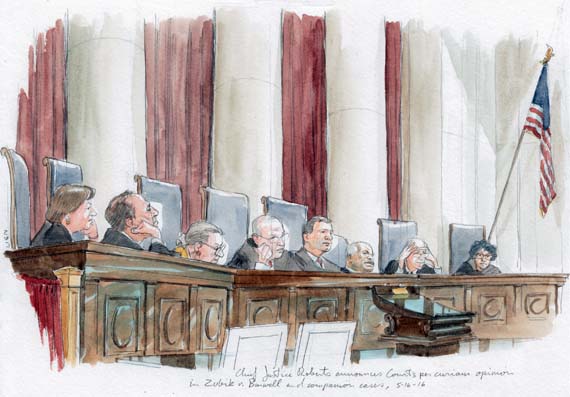 One reading of Monday’s developments was that the Court, now functioning with eight Justices, was having difficulty composing a majority in support of a definite decision on the legal questions.  Thus, what emerged had all of the appearance of a compromise meant to help generate majority support among the Justices.  With this approach, the Court both achieved the practical results of letting the government go forward to provide the contraceptive benefits and freeing the non-profits of any risk of penalties, even though neither side has any idea — at present — what the ultimate legal outcome will be and, therefore, what their legal rights actually are under the mandate.

Those uncertainties are now likely to linger through the remainder of President Obama’s term in office, which ends next January.  The appeals courts may well order the filing of new legal briefs, and may hold new hearings, before issuing a new round of rulings on the controversy.  However, the entire future of the ACA, including its birth-control mandate, may now depend upon who wins the presidential election this year and which party has control of Congress when it reassembles in 2017.

The three issues that the Court had agreed to rule on, and then left hanging at least for now, were whether the ACA mandate violates the federal Religious Freedom Restoration Act by requiring religious non-profits that object to contraceptives to notify the government of that position, whether the government had a “compelling interest” in assuring cost-free access to contraceptives, and whether the move by the government to go ahead and arrange access to those benefits for those non-profits’ employees and students was the “least restrictive means” to carry out the mandate.

Doing on Monday much the same that it had done in several temporary orders at earlier stages of this controversy, the Court accepted that the non-profits already had given the federal government sufficient notice of their objection to the mandate, and that the government could use that notice as the basis for going ahead to provide actual access, at no cost, to the employees and students of those institutions.

The unsigned opinion that the Chief Justice announced included an attempt to explain why the Court was bypassing a definitive ruling on the legal issues.  It cited the replies that both sides had filed, after the cases had been argued, in reaction to a suggested compromise plan devised by the Court. 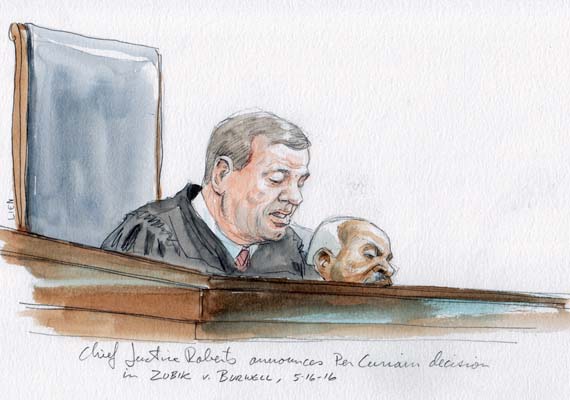 The Court on Monday interpreted those filings as containing concessions that move the two sides somewhat closer together, but at the least provided a basis for letting the federal appeals courts be the first to analyze the meaning and impact of those concessions.   The Court expressed the hope that the two sides would use this new opportunity, in the appeals courts, to work toward common ground that would protect the religious sensibilities of the non-profit institutions at the same time that women of child-bearing age would not be deprived of contraceptive devices and methods.

“We anticipate,” the Court said, “that the courts of appeals will allow the parties sufficient time to resolve any outstanding issues between them.”  That appeared to be an invitation for the lower courts at least to explore whether the two sides could reach agreement without prolonging the court battles.   It conceded, though, that there may still be “areas of disagreement” between the two sides.

There are existing regulations, issued in several versions by the Department of Health & Human Services, on ways to implement the birth-control mandate.  Those regulations, in their present form, depend upon the government working out with the insurance companies that have created health plans for the religious non-profits to provide access to the actual contraceptive benefits.

It is not clear, at this point, whether the government would have to modify those existing regulations, or write new ones, to go forward as a practical matter with providing cost-free access.  It is already clear, however, that the Supreme Court’s action Monday does clear the way for the government to move ahead to do what it would need to do to assure access as a practical matter.  Since the government has already expressed concern about delaying that access, it presumably will move rapidly — at least as rapidly as bureaucratic machinery can be put in motion — to carry out the mandate even as the appeals courts go forward with further review of the legal questions.

While the Court’s opinion on Monday cited three prior precedents upon which it said it was relying, in passing the issue back to the federal appeals courts for a new look, none of those three appear to be exact matches with the sweep — and the creativity — of what the Court had opted to do on the ACA mandate.

Given how activist groups that had been following the case in the Court came out with sharply differing reactions to the result on Monday, it may take some time for observers to sort out just what the Court has done, and its implications.  Among other interpretations that may emerge, one that does seem likely is that this was a new demonstration of how the Court is having to adjust its actions to deal with the fact that it is one Justice short of its normal membership.