The transcript in Ocasio v. United States, argued on Tuesday morning, suggests that the Justices are ready to give “a simple answer” to the question presented, even if more complex questions beneath the surface give them some pause.  Any “brain teaser” elements (see my preview of the arguments) will seemingly be left for another day.  Other than Justice Antonin Scalia (who has dissented regarding the federal extortion statute before), no Justice appeared to be sympathetic to Ocasio’s argument to use the statutory language “from another” to limit a conspiracy conviction to violate the federal Hobbs Act.  Justice Elena Kagan indicated early on that, in her view, the fact that the property at issue came not “from another” but from one of the co-conspirators himself, makes no difference:  “The conspiracy offense is made out if two people agree that somebody should obtain property from another.”  “Simple argument, simple answer,” as Justice Stephen Breyer summarized at the end.

Does “agree” in conspiracy extend to sharing the same intent?

Readers will recall the facts and question presented. According to Ocasio’s description of what was charged and proved to the jury – a description the Justices appeared to accept – Ocasio was a cop who accepted bribes from the Mejia brothers in return for steering damaged cars to the Mejia’s body shop.  (The case actually involved ten other officers; and one could argue that the car owners ultimately paid out the money.  But the Justices seemed ready to accept the case as purely a two-person, bribe payor-payee, conspiracy.)  Ocasio was charged federally with “extortion … under color of law,” and the Court ruled way back in 1992 (Evans) that a public official’s act of simply accepting a bribe is Hobbs Act “under color of law” extortion.  So even though, as Justice Scalia noted, “I dissented I assume” in Evans, Ocasio’s substantive Hobbs Act convictions for receiving bribes are not at issue.

Instead, Ocasio challenges his conspiracy conviction, as follows:  The Hobbs Act requires that a violator obtain property “from another.”  Conspiracy requires that violators “agree” to commit an offense.  Thus Ocasio argues that the conspiracy arises only if the violators “agree” to take property “from another.”  But, says Ocasio, in his case one of the two charged parties was the owner of the property – the Mejias paid the bribes “from their own pocket.”  Ocasio thus argues that because the bribe payors agreed to pay out their own property, they did not agree to obtain property “from another.”  Ocasio’s syllogistic argument is that, if one person intends to obtain their own property, while the other person intends to obtain property “of another,” then there is no “agreement” on that element of the crime.  The defendants do not share the same intent – that is, there is no “unity of purpose” or agreement on “from another” – and the conspiracy conviction must fall.

The Justices appeared to be in agreement today

Although Ocasio’s lawyer, Ethan Davis from San Francisco, performed ably in his first argument, all the Justices who spoke today appeared, one by one, to reject Ocasio’s position.  Even Justice Scalia, a possible dissenter here, said “that makes sense to me” at one point during Assistant to the Solicitor General Allon Kedem’s steady argument for the government.  As Justice Kagan repeatedly explained, all you need to do is “shift perspective.”  From Ocasio’s perspective, he sought to obtain money (the bribe) from another (the Mejias), and the Mejias agreed to help him do that (obtain money from them).  As Justice Kagan said only a few minutes into Davis’s opening argument, “Ocasio is committing every element of the substantive offense … and the body shop owners agreed that he would do so.  [I]t seems to me … there is a conspiracy here.” 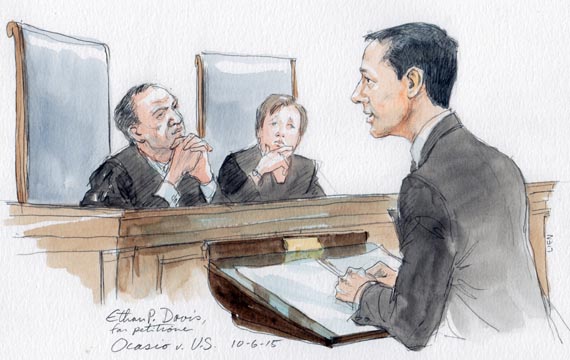 Other Justices echoed this straightforward view, even as they explored other, perhaps more difficult, questions.  Justice Kennedy sought assurances that the government did not intend to turn every state and local bribery scheme into a federal conspiracy, and Justice Breyer echoed: “We are already federalizing vast numbers of State crimes.”  When Kedem advanced the solution that Hobbs Act conspirators must be limited only to “active participants” – as four circuits have done – Justice Scalia asked “where do you get this [non-textual] requirement from?” and Justice Kagan said “I guess I’m with Justice Scalia” on that question.  Justice Breyer noted that Ocasio’s argument was that the Court should not extend Evans and Hobbs Act conspiracies to the payors of bribes (who are not obtaining property “from another”) – or in other words, “don’t make a bad situation worse.”  And Justice Sotomayor pointed out that formulating jury instructions about “active participation” is difficult, while the Chief Justice noted that the jury instructions in this case did not include the term. 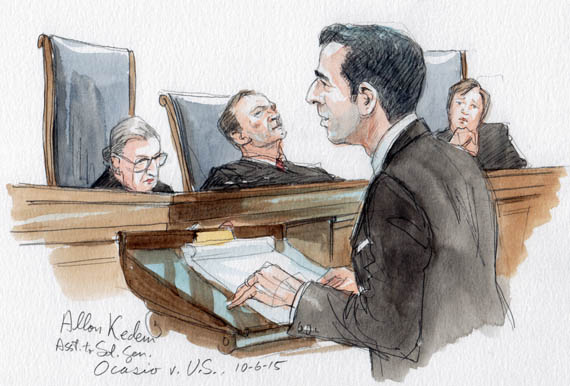 Meanwhile, Justice Scalia expressed general concern regarding the reach of federal commerce clause power, while the Chief Justice noted that a conspiracy charge gives prosecutors “considerably broader” strategic power.  An opinion drafted to capture the entire Court may have to echo some of these more complex, but tangential, thoughts.  However, none of the Justices expressed concerns appeared sufficient to distract a majority from affirming the conspiracy conviction here.  As Kedem explained, “this is not th[e] case” in which to limit conspiracy law: “the criminal conspiracy in this case was a durable, multi-faceted criminal enterprise.”

Predicting results from oral argument is never certain, and no case that reaches the Supreme Court is truly “easy.”  But this case now looks like one in which the Justices could collegially issue a decision before Christmas.