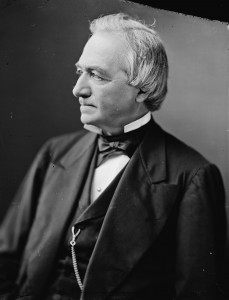 On Wednesday evening, Justice Ruth Bader Ginsburg hosted the second lecture in the 2015 Leon Silverman Lecture Series, which focuses on the Supreme Court and Reconstruction. In her lecture at the Court, Pamela Brandwein of the University of Michigan sought to unravel the conventional wisdom, which originated with historian C. Vann Woodward, that the Court killed Reconstruction.

According to the conventional view, after Lincoln’s death, his wobbly “new birth” for the nation plowed into the Court’s state action doctrine and promptly received the kiss of death from the Compromise of 1877. At that point, Democrats took control over Reconstruction policy; Republicans did the same for economic policy, leading them to abandon their black constituents. In the conventional story, Justice Joseph P. Bradley is portrayed as a key antagonist in the plot against Reconstruction, and as the progenitor of a jurisprudence that crippled the Fourteenth and Fifteenth Amendments.

In keeping with the revisionist theme of this year’s lecture series, which has also, at least thus far, sought to partially redeem Reconstruction-era Justices, Brandwein’s point of departure for the evening was that the conventional wisdom is largely a myth.

First, during the presidency of Ulysses S. Grant, there was an economic panic that led to a deep depression in the early 1870s. Unemployment was at fourteen percent, a quarter of the country’s railroads went out of business, and the grim economics were blamed on the party in charge, the Republicans. Democrats gained control of the House, and with it control over appropriations. This is the moment, in the conventional view, when Republicans abandoned their black constituents. However, Brandwein noted, because Reconstruction depended on resources being funneled into civil rights enforcement, which was expensive and therefore unpopular, the already unpopular Republicans couldn’t afford to fight for those appropriations.

Next, in the 1880s members of the Ku Klux Klan were punished, and there was strong agreement among members of the Court that voting rights for blacks should be upheld, which makes very little sense under the view that the Court’s jurisprudence was meant to block Reconstruction. What should we make of that odd development?

Brandwein explained that, in the last ten years, she and other scholars have begun looking at the “lost jurisprudence” of this era for new insights to this old riddle. Brandwein suggested that the answer could be that the state action doctrine must be understood within the context of a consensus within the legal community which existed in the 1800s – but has since gone out of fashion — that there two kinds of rights, natural and legal.

As background to the jurisprudence which developed out of that consensus, Brandwein first explained a central political debate within the Republican Party at the time. Radicals wanted the federal government to have original control over crime and Klan violence, while centrists preferred to have the federal government step in only if the state neglected to provide redress. Brandwein described the constitutional principle that emerged from the centrist camp as follows. Assume a Klan assault takes place. On the centrist view, the status of that crime depends on whether the state usually punishes assaults. If the state usually punishes assaults, but neglects to provide redress for the Klan assault, then the federal government can step in and punish the perpetrators.

According to the conventional story, state action theory prevented redress for Klan violence because it limited the application of the Fourteenth Amendment to states, as opposed to individuals, thereby protecting Klan members. Pulling the thread on that narrative, Brandwein turned to an “unrecognized milestone”: Justice Bradley’s 1874 opinion in United States v. Cruikshank, a case involving the Colfax massacre, which Justice Bradley heard while riding circuit in Louisiana.

Brandwein contends that, in his opinion, Bradley was “attempting to reconcile all three of the Reconstruction amendments,” and although the Justice was rebuffing Congress to some extent, he was also creating a blueprint for future successful indictments of Klan members. For Bradley, Brandwein explained, the protections that Congress could offer depended on whether the rights that had been violated were natural rights, which were secured by the Constitution but had their authority in God or nature, or instead rights created by the constitution.

In Bradley’s view, states had original jurisdiction over the realm of natural rights, which included rights to property, contracts, witnessing, suing, and equal redress for injury. If a citizen’s natural rights were violated, and the state did nothing to remedy the injury, then the federal government could step in. This, Brandwein proposed, was the beginning of state neglect, Bradley’s blueprint for prosecuting Klan violence in states that were reluctant to redress such injuries.

According to this interpretation, Bradley’s decision in Cruikshank throwing out the indictments against the Colfax massacre perpetrators was not grounded in gratuitous racism, but in the prosecution’s failure to mention racial motivation. Therefore, although the decision looked like a win for the Klan, the truth of the opinion is much deeper.

Brandwein made two points to support her reading against the conventional view. First, when Cruikshank came to the Supreme Court, the Klansmen’s lawyers dedicated their briefs and arguments to attacking Bradley’s state neglect theory, notwithstanding that their clients had prevailed under it – which suggests that they (the Klan’s lawyers) were worried about Bradley’s theory, even if the freed perpetrators were not.

Second, Bradley consulted with the other Justices on his circuit opinion and his state neglect theory, which was highly unusual. Equally unusual was that in the following years, it was Bradley’s circuit court opinion, and not the Supreme Court opinion, which other courts cited. Bradley also circulated his opinion widely among Congress and the Cabinet. All of which suggests he was invested in the opinion for more than what it provided in the outcome of the case.

Bradley did not write the Court’s opinion in the case in 1876. That assignment went to Chief Justice Morrison Waite. Brandwein described Waite’s opinion as a “skeletal” version of Bradley’s circuit opinion that left out the gruesome facts of the case, as well as Bradley’s theory of how to bring cases against the Klan. At the time the decision was issued — shortly before another election, which the Republicans appeared to be losing — newspapers covered the decision not as an outrage, but as “difficult to parse.” It appeared, at the time, to have been narrowly decided on a technicality.

In 1877, after the Republicans won the election, Chief Justice Waite heard another election massacre case while he was riding circuit. Brandwein reported that Waite’s opinion included twelve pages of facts and a very clear articulation of Bradley’s theory — that all that mattered in such cases was racial motive — suggesting that the Cruikshank opinion was intentionally watered down because of the election.

Next, Brandwein turned her attention to The Civil Rights Cases, which – like Cruikshank – have conventionally been understood as protecting racist business owners from the reach of the Fourteenth Amendment.

Brandwein proposed that properly understanding the Civil Rights Cases requires uncovering another distinction that was significant in the 1800s but has since disappeared: “civil rights,” in the 1800s, were narrowly understood to encompass natural rights, such as property, contracts, witnessing, suing, and equal redress for injury. “Social rights,” on the other hand, applied to things like marriages and public accommodations. And, Brandwein suggested, it is in the area of social rights, rather than civil rights, that Republican centrists expressed their white supremacy.

Here, Brandwein made her central point: The distinction between civil and social rights reveals to a modern audience is that it was possible for jurists at the time to be simultaneously concerned with material and physical security of blacks (protecting their natural rights) while remaining equally invested in excluding blacks from social institutions such as interracial marriage and dining coaches. Brandwein noted that Justice Harlan took the radical stance in his dissent in The Civil Rights Cases, arguing that public accommodations were a matter of civil right.

In sum, Brandwein suggested that Bradley’s jurisprudence is best understand as articulating the position that if blacks could show a civil rights violation that the state had neglected, they were entitled to protection from the federal government.

There are two more lectures in the 2015 lecture series, both in October.