Opinion analysis: Reasonable mistakes of law by police do not violate the Fourth Amendment

The exercise of police discretion to stop people on the street is front and center in today’s headlines. In this case, a North Carolina policeman stopped Heien’s car because it had a brake light that did not work. During the stop, Heien consented to a search of the car, which yielded cocaine in a duffle bag and Heien’s ultimate conviction for attempted drug trafficking. On appeal, the North Carolina appellate courts surprisingly ruled that the outdated state vehicle code required only one working brake light (“a” stop lamp, in the words of the statute); therefore, there had been no violation of law that would permit the stop. The officer made no error about the facts; but he had been mistaken about the meaning of the law. However, the North Carolina Supreme Court ruled, the officer’s mistake about this law was “reasonable,” and for that reason the Fourth Amendment right to be secure from “unreasonable … seizures” was not violated. This morning’s opinion in Heien v. North Carolina affirms that holding. 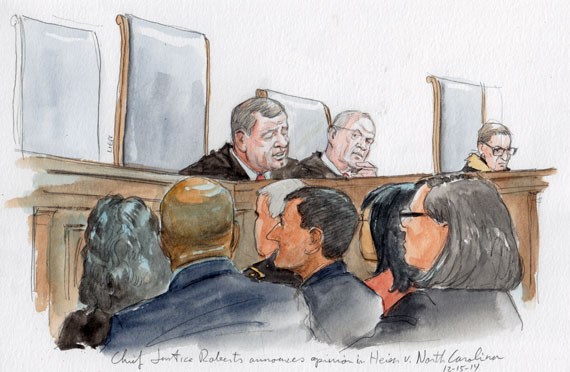 The constitutional law of “reasonableness”
The vague word “unreasonable” in the Fourth Amendment is a lawyer’s playground, and questions about what sort of circumstances constitutionally permit law enforcement seizures have thus plagued the federal courts since the Fourth Amendment was adopted. In 1813, Chief Justice John Marshall wrote that the constitutional standard is “circumstances which warrant suspicion” – a relatively unspecific and therefore unhelpful standard.   But its unhelpfulness flows from the generality of the amendment itself. It is not judge-made “policy”; it is constitutional text.

Over the years the Court has honed its thinking about what constitutes “probable cause” to stop or search (for example, Illinois v. Gates in 1983), and in Terry v. Ohio in 1968 the Court famously ruled that even brief stops on the street require at least specific and articulable “reasonable suspicion,” not just hunches. The Court has subsequently made clear that even when police are mistaken about facts, their stops do not violate the Constitution if their mistakes are “reasonable.”

Today, in an opinion by Chief Justice John Roberts, a majority of eight Justices affirmed that “there is no reason … why this same result” should not apply “when reached by way of a similarly reasonable mistake of law.” The Court conceded – and Justice Sonia Sotomayor, the lone dissenter, agreed – that no precedent of the Court has expressly answered this “reasonable mistake of law” question (“scarcely a peep”). The Court noted, however, that as early as 1809, the Supreme Court ruled that a reasonable mistake of law about probable cause permitted a customs seizure under a federal statute. By 1860, this general principle had been adopted in “numerous [lower court] cases.” While acknowledging that the statutory customs cases were “not directly on point” for the constitutional question, the Court also explained that “no decision of this Court in the two centuries since has undermined that understanding” that reasonable mistakes of law can excuse governmental action. In fact, the Court explained that in more recent cases, such as Michigan v. DeFillippo, it had found no Fourth Amendment violation even when governmental searches were based on state statutes later declared unconstitutional. (Justice Sotomayor strongly disagreed with this reading.)

Arguing for Heien, attorney Jeffrey Fisher had “struggle[d]” to limit the Court’s ruling “solely [to] the exclusionary rule” – that is, the remedy – in lieu of a more general ruling about the right (that is, whether the officer’s stop was an “unreasonable” violation of the amendment). This was likely an attempt to preserve some relief for Heien on remand, because North Carolina purportedly has not adopted a “good faith exception” to the exclusionary rule. But there will be no remand for further proceedings under today’s ruling, which flatly “affirmed” the state court’s ruling. The Court said that DeFillippo was plainly a decision about the meaning of “probable cause,” and thus its holding regarding a reasonable mistake of law cannot be “transform[ed] into an exclusionary rule decision.” So in this case, because the officer’s mistake about the meaning of North Carolina’s vehicle code was reasonable, “there was no violation of the Fourth Amendment in the first place.”

(By contrast, the Court also noted that an individual officer’s mistaken view, “no matter how reasonable,” that he has complied with the Fourth Amendment, does not undermine a reviewing court’s “ultimate conclusion” that governmental actions have violated the Fourth Amendment – even though it might affect the remedy. This significant reservation regarding the scope of the Court’s ruling is emphasized in footnote 1 of Justice Elena Kagan’s concurring opinion, and should not be overlooked.)

Importantly, particularly in light of recent controversies, the Court observed that the standard of reasonableness for mistakes of law is “not as forgiving” as some might have it. An officer’s legal error must be objectively reasonable, and not based on a particular officer’s “subjective understanding” or on a “sloppy study of the laws he is duty-bound to enforce.” Thus, the Court suggested, an officer must “learn[] the law,” and I would expect that the familiar standard of a “reasonably well-trained officer” will be rigorously applied by lower courts when confronted with Heien errors in the future.

In a separate concurrence, while joining the majority opinion “in full,” Justice Kagan (joined by Justice Ruth Bader Ginsburg) emphasized these “important limitations.” Only a “genuinely ambiguous” statute should support a “reasonable” mistake about its meaning, one that would present judicial officers with “interpretive work” that is “really difficult” or “very hard.”

In a solo dissent, Justice Sotomayor argued, not unreasonably, that a “fixed legal yardstick” would be easier to administer than a floating standard of “reasonable” legal mistakes. “The actual state of the law” should control, rather than a “reasonable misunderstanding about the law.” Law enforcement would not be penalized if Fourth Amendment violations were found based on such legal misunderstandings, because “good faith” would prohibit the exclusion of evidence and “qualified immunity” would protect officers. Meanwhile, definite and clear interpretations of laws would be encouraged, rather than elided.

With only slightly veiled references to current controversies involving police confrontations on the street, Justice Sotomayor contended that the Court’s less definite ruling would lead to “further eroding [of] the Fourth Amendment’s protection of civil liberties … where that protection has already been worn down.” Police stops based on reasonable suspicion are “invasive, frightening, and humiliating,” and Justice Sotomayor submitted that today’s ruling “significantly expands this authority.” There are “human consequences … including those for communities and for their relationships with the police.” The majority’s rule, she continued, “will prove murky in application” and difficult for police and courts to administer. Of course, only time will tell whether today’s “reasonable mistake of law” holding will be “narrowly circumscribed,” as both the concurrence and dissent insist it should be.

Ignorance of the law is still (usually) no excuse

Before closing, let’s put one trending, but erroneous, sound bite to rest.   Heien argued that because the common-law maxim “ignorance of the law is no excuse” applies to private citizens who break the law, it should also be applied to police here. Tweeters are now claiming that today’s ruling means the maxim applies to everyone except the police. That not only ignores the very different contexts (criminal law breaking versus justifications for stopping suspected law-breakers), but it’s wrong also in its premise. In fact, the Court long ago ruled that a reasonable “ignorance of the law” can be a defense to prosecution. In Lambert v. California (1957), the Court vacated a criminal conviction because the law at issue could not be reasonably known to the citizenry. This ruling still finds application today, albeit rarely. It seems that the Court may have (even if not consciously) reinvigorated the Lambert concept today at page 12, where it indicated that “the government cannot impose criminal liability based on a mistaken understanding of the law.” If read broadly, this statement could represent a sea change in the modern understanding of Lambert – a decision that Justice Frankfurter called, in dissent, “a derelict on the waters of the law.” But it seems clear that the Court today meant “on [its own] misunderstanding of the law,” not a private citizen’s.

Meanwhile, police who break the law are still subject to the usual maxim: ignorance of the law will not excuse their lawbreaking any more than anyone else’s. But here, police are trying to implement the Fourth Amendment, not break the law. There is of course some tension between the idea that “the law is definite and knowable” versus an officer’s “reasonable” legal mistake. But the Court held today only that when police officers reasonably understand others to have broken the law, they may briefly stop them to investigate without violating the Fourth Amendment. Absent a shift in societal standards for law enforcement – and recently we are witnessing at least a re-examination — this ruling seems unsurprising.

Final thoughts: Enforcing the Constitution is the hard part

Applying its holding to the facts today, the Court had “little difficulty concluding” that the police officer’s “error of law was reasonable.” The “stop lamp” provision of North Carolina’s law “had never been previously construed,” and other parts of the code indicated that all “rear lamps” (plural) had to be functional. As Justice Kagan wrote separately, the officer’s belief here “had much to recommend it.” Indeed, it seems likely that virtually all drivers today believe, reasonably and objectively, that the law requires both their brake lights to work.

Today’s headlines focus on questions of police discretion used to interact with people on the street. But it is the failure to enforce reasonable standards for police intervention that drives this concern, not the accepted legal rule that permits police intervention when there is reasonable suspicion. Factual mistakes seem inevitable within the constitutional standard of reasonableness — all that the Court ruled today is that “reasonable men make mistakes of law too.” The Framers intended reasonableness to be the key – it is up to us to give meaningful enforcement to the term.