Workers who are required to stay after their normal hours on the job to undergo a security screening are not entitled to overtime pay while they wait for that process and then go through it, the Supreme Court ruled unanimously on Tuesday.  The decision in Integrity Staffing Solutions, Inc. v. Busk overturned the one federal appeals court that had ruled in favor of workers in that scenario — an increasingly common practice in the workplace. 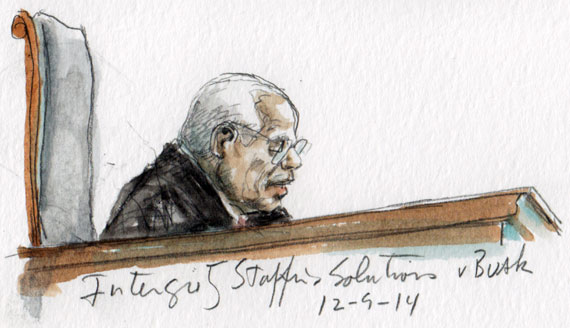 Justice Thomas delivers the opinion of the Court.

That ruling and a second one, clearing up a split among lower courts on how courts should handle a claim that a juror in a trial was dishonest, were the first decisions on argued cases in the current Term.  The second ruling came in the case of Warger v. Shauers.

The overtime pay case involved workers at two warehouses in Nevada, which served as storage and order-filling facilities for the online retail giant Amazon.com.  Two of Integrity’s hourly workers sued the company after it began requiring all workers to go through screening before they left the premises, a policy designed to deter theft of goods.

The two workers, who filed a class-action lawsuit, contended that they had to wait up to twenty-five minutes to be searched, at which point they then had to remove their wallets, keys, and belts and pass through a metal detector. Their lawyers argued that because this procedure was a mandatory part of their job, imposed by their employer, they were entitled to be paid overtime for the additional time.

The U.S. Court of Appeals for the Ninth Circuit ruled that Integrity had to pay overtime for the screening process, concluding that this after-work review was a job requirement and was for the company’s benefit.

Reversing that result, and reaching the same conclusion reached by all other federal appeals courts that had considered the issue, the Supreme Court declared that such screening procedures were not an “integral” part of the job.  Integrity’s staff at the warehouses, the Court said in an opinion by Justice Clarence Thomas, were hired to take products off the shelves and package them for shipment to Amazon’s customers, not to go through security screenings.

The Court also found that Integrity could have eliminated the screenings without affecting the workers’ ability to complete their normal tasks.   The decision commented that the Ninth Circuit was wrong in focusing on whether the employer had required the extra activity at the end of the workday.  If that were the test, Justice Thomas wrote, it would sweep into the realm of paid employment the very kind of activities that Congress had enacted the Portal-to-Portal Act, passed in 1947 to narrow the scope of wage and hour rights under the Fair Labor Standards Act, to address.

Justice Sonia Sotomayor, joined by Justice Elena Kagan, wrote a brief concurring opinion, elaborating on their understanding of the standards the Thomas opinion had used.

The dispute resolved by the Court in Warger focused on the scope of a rule governing evidence in federal court cases. Rule 606(b) specifies that, when a court is ruling on a claim that a verdict or indictment was invalid, jurors may not be summoned to testify about anything said or any incident during jury deliberations, the impact of anything that could have affected how jurors voted, or the mental processes of the jurors.  There is an exception, however, for information about outside influence on jurors.

This case involved a challenge to a verdict reached by a jury in a case stemming from a highway accident in South Dakota.  A Missouri man, Gregory P. Warger, was seeking a new trial after the verdict went against his claim of negligence by a driver whose truck collided with Warger’s motorcycle, causing injuries that included the loss of a leg.

Warger sought a new trial, arguing that the woman who served as the jury foreman had lied under questioning when the jury was being selected at the start of the trial.  That, Warger claimed, tainted the whole process, and thus he should be allowed to use the evidence of the woman’s alleged lie to gain a new trial.

The Supreme Court ruled unanimously Tuesday, agreeing with the U.S. Court of Appeals for the Eighth Circuit, that the federal rule excluding evidence about alleged juror misconduct applied to the jury-selection process of a trial.  Thus, another juror’s affidavit recounting the claimed flaw in the jury selection process could not be used as the basis for a new trial, the Justices ruled in an opinion by Justice Sotomayor.