By the end of Wednesday’s oral argument in Alabama Legislative Black Caucus v. Alabama and Alabama Democratic Conference v. Alabama, it was not clear whether the state of Alabama or challengers to its state redistricting plan would be likely to win the racial gerrymandering claim currently before the Supreme Court. Nor was it clear how the Court would separate permissible partisan gerrymanders from impermissible racial gerrymanders. But the argument left little doubt that, one way or another and sooner or later, Alabama is likely to have a legislative districting plan which helps the state’s Republican legislators and minimizes the voting power of the state’s Democrats and African Americans. 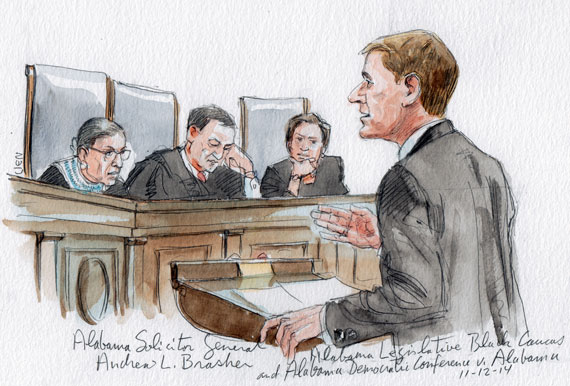 The legal landscape and factual background of this case are exceedingly complex and laid out more fully in this argument preview. The case concerns a challenge to state legislative districts drawn by the Alabama Legislature after the 2010 census. The legislature, newly controlled by Republicans, drew a redistricting plan that contained the same number of majority-minority Senate districts and one additional majority-minority House district compared to the 1990s plan drawn by a court and the 2000s plan drawn by a Democratic legislature. Because of population shifts and declines, as well as the composition of the original 2001 districts, the African-American districts were the most underpopulated of all the districts, meaning that many voters had to be shifted into these districts to comply with “one person, one vote” requirements.

The state legislative leaders in charge of redistricting set as a goal a deviation in population of no more than two percent across districts. Further, the leaders instructed the consultant charged with redistricting to maintain not only the same number of majority-minority districts in the two state houses but also the same percentage of African Americans within each district. The leaders and consultant indicated they kept the same percentage of African-American voters in each majority-minority district in order to comply with the non-retrogression principle of Section 5 of the Voting Rights Act.

The lower majority sided with Alabama, stating that the Republican post-2010 census plan was just partisan politics no different than what the Democrats did in the 2000 round of redistricting. On the specific question whether the Alabama redistricting plan was an unconstitutional racial gerrymander, the lower court majority held it was not: the state’s predominant motive in redistricting was complying with the two-percent population deviation maximum as part of the “one person, one vote” principle, not dividing voters on the basis of race. Further, the court held that any division of voters on the basis of race was justified by the state’s requirement to comply with the non-retrogression principle of Section 5 of the Voting Rights Act.

The dissent disagreed on all counts, arguing that race was the predominant factor in redistricting, and Section 5 did not require the maintenance of the same percentage of minority voters in each majority-minority district. Further, since the Supreme Court’s 2013 decision in Shelby County v. Holder, holding the preclearance formula unconstitutional, eliminated the preclearance requirement for Alabama, compliance with Section 5 could no longer be a compelling interest to justify a racial gerrymander.

At the Supreme Court, the Justices’ questions were all over the map (literally and figuratively), indicating at least three possible resolutions to this case. First, the Court could reject the racial gerrymandering claim, which narrowly seems to be the most likely outcome based upon the questions at oral argument. Second, the Court could remand the case for more fact-finding on the legislature’s motivation in each district. Third, the Court could reject Alabama’s plan, but the result would be that Alabama could draw a new redistricting plan, which could be a brazen partisan gerrymander so long as racial information was not made predominant in the process. And such a plan would no longer be subject to Voting Rights Act preclearance thanks to the Shelby County decision.

First, it is possible that the Justices will uphold Alabama’s redistricting and reject the racial gerrymandering claim. Chief Justice John Roberts and Justice Antonin Scalia both seemed to indicate that states are in a tough situation when redistricting in that they must take race into account to comply with the requirements of the Voting Rights Act but cannot take race too much into account or else they run afoul of the racial gerrymandering “predominant factor” inquiry. The Chief Justice said that legislatures have to find the “sweet spot” in redistricting.

Both the Chief Justice and Justice Scalia seemed to indicate their belief that under the Voting Rights Act’s preclearance provisions in effect at the time of redistricting, Alabama had to maintain not just the same number of majority-minority districts but also the same percentages of minority voters within each district to get preclearance. The Chief Justice, for example indicated that “if Alabama had reduced the number of minority voters in majority­-minority districts in any significant way, the Attorney General would have come down on them like a ton of bricks.” 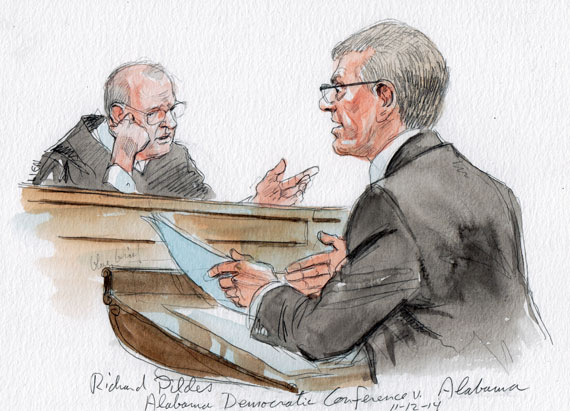 Professor Richard Pildes, one of the attorneys arguing for the plaintiffs, pushed back effectively on the notion that the attorney general would have required the state to maintain the same percentage of majority-minority districts in order to get Justice Department approval for a redistricting plan. In fact, prior practice did not require this. Pildes noted that the real question was whether there were enough minority voters in a district to allow it to elect representatives of their choice. Locking in minority voting percentages in districts where minority voting rates began to equal that of whites would have the effect of diminishing minority voting strength through packing minority voters into a smaller number of districts – something the Department of Justice would not seek to foster.

Even if Section 5 of the Voting Rights Act did not require the state to maintain the same percentages, the Justices might accept the redistricting plan approved by the Alabama legislature if Alabama had a good faith belief it had to do so to comply with the Voting Rights Act.

Justice Anthony Kennedy, who may be the key vote in this case, did not see Alabama as having drawn its lines to comply with the Act. Instead, he saw Alabama as engaging in a partisan gerrymander, something which may be distasteful but is not the basis for the Court to strike down a plan as a racial gerrymander. Indeed, Alabama’s solicitor general, Andrew Brasher, seemed to defend the plan in part as a partisan gerrymander: “Certainly with respect to specific districts here, when they were actually challenged, we were able to respond and say this was for partisan political reasons.”

Justice Kennedy seemed particularly concerned about what he called a “one way ratchet.” If Democrats could move African-American voters out of concentrated districts to serve Democratic Party purposes without such actions being considered a racial gerrymander, why can Republicans not pack them back in to serve Republican Party purposes when Republicans control the legislature? Justice Kennedy seemed particularly attuned to the “race or party” problem: with most Democrats in Alabama being African Americans and most Republicans being white, how does one determine whether a predominant factor in gerrymandering is race or party?

The second option for the Court is a remand for a determination as to whether the state of Alabama had an unconstitutional racial purpose as to specific districts rather than to the state plan as a whole. This is the position favored by the Justice Department, but it was a position which did not seem to gain too much traction. Justice Samuel Alito repeatedly questioned whether a district-based claim was actually preserved and advanced by the plan’s challengers. Justice Elena Kagan appeared to view the challengers’ claim as based upon the state’s overall redistricting strategy, and not something to be resolved on a district-by-district basis. Justice Sonia Sotomayor seemed to be skeptical of the entire racial gerrymandering enterprise, wondering what the injury is in such cases when there is no vote dilution: “it’s an ephemeral injury; race played a part in the overall plan, without an effect in a particular district.”

Justice Stephen Breyer also seemed skeptical of a remand for a district-by-district determination, seeing it as “a lot of time and trouble” to get to the same result.

The third possibility is that the Court sides with the challengers and agrees that Alabama’s preservation of the same percentages of African-American voters in each district made race the predominant factor in redistricting and therefore the entire redistricting has to be redone.

It is not clear that there are enough votes for this approach. That would seem to require either some of the conservatives to come off their (mistaken) belief that maintaining the percentages was required by Section 5 of the Voting Rights Act or more liberal Justices broadly applying a racial gerrymandering rule they had rejected when used by conservatives to rein in majority-minority districts. Justice Breyer for good reason called the pushing of racial gerrymandering claims by African Americans and Democrats in the Alabama case “an obverse and odd situation.” Justice Scalia said that plaintiffs were “making the argument that opponents of black plaintiffs used to make here.”

At bottom, a declaration that Alabama engaged in a racial gerrymander might not be much of a victory for the challengers. Chief Justice Roberts pointed out that (thanks to Shelby County) if the Court struck any or all of the districts and sent it back to the Alabama legislature for a new plan, that plan could go into effect without getting Justice Department approval, under the now-moribund Section 5 of the Voting Rights Act.

The Chief Justice asked Solicitor General Donald Verrilli, arguing for the government, whether he was concerned that the new redistricting would take effect without DOJ approval. (Almost certainly Alabama would engage in just as partisan of a gerrymander, and perhaps an even starker one, while avoiding the legal pitfalls of taking race too much into account in redistricting.) 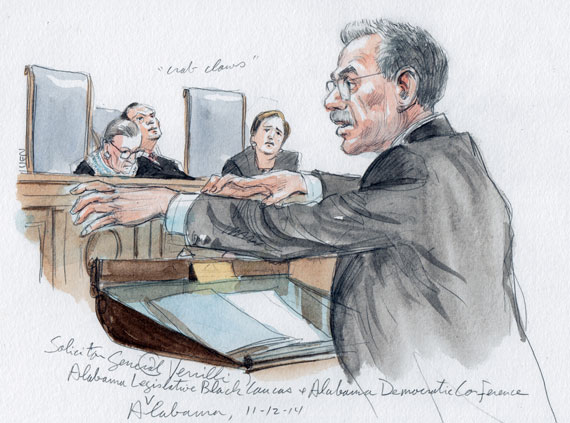 “It is what it is, Mr. Chief Justice,” General Verrilli replied.