Opinion analysis: The triumph of the Lanham Act (and of federal private rights of action)

The Lanham Act is having a very good year.  Initially enacted in 1946, the Lanham Act is currently famous as the nation’s primary federal trademark statute, but the statute also confers private rights of action that allow businesses to sue each other for certain forms of unfair competition other than trademark infringement.  In March, the unanimous Supreme Court decision in Lexmark International v. Static Control Components swept away the “prudential standing” limitations on the Lanham Act’s private right of action (and on all other federal private causes of action) and replaced those limits with a relatively plaintiff-friendly analysis that permits firms to sue their competitors for “false or misleading” commercial statements.  Now, as the Court enters the homestretch of its Term, yesterday’s unanimous decision in POM Wonderful v. Coca-Cola has eliminated another significant hurdle for Lanham Act plaintiffs. 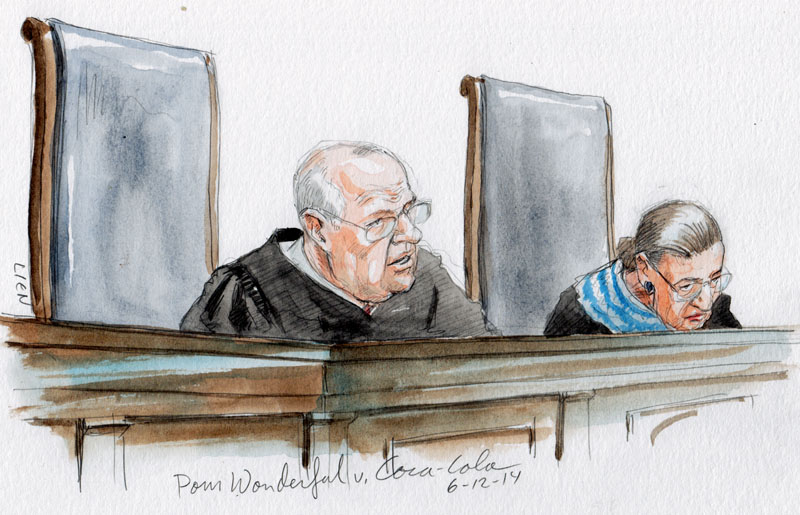 The facts of the case are simple.  POM markets various pomegranate juices, including a pomegranate-blueberry juice.  Coca-Cola, under its “Minute Maid” brand, markets a juice that is 0.3% pomegranate juice, 0.2% blueberry juice, and 99.5% other juices (mostly apple and grape juices).  Coke labels its juice blend “POMEGRANATE BLUEBERRY” (in all caps).  POM alleged both that Coke’s label is misleading and that the misleading label has hurt POM’s sales. Under the Supreme Court’s decision in Lexmark, POM is clearly the type of plaintiff capable of suing under the Lanham Act’s private right of action because POM is a competitor of Coke in the juice market and POM has alleged that it has suffered losses proximately caused by Coke’s misleading statements.

The stumbling block for POM’s suit, at least in the lower courts, was that labels on foods and beverages (including juice labels) are regulated by the Food and Drug Administration under the federal Food, Drug, and Cosmetics Act (FDCA).  In the lower courts, Coke was able to argue successfully that the FDA’s regulation of juice labels precludes POM’s Lanham Act claim because, as the Ninth Circuit reasoned below, “the Lanham Act may not be used as a vehicle to usurp, preempt, or undermine FDA authority.”

At the Supreme Court, the case had been presented by the parties’ lawyers as a choice between two competing canons of statutory interpretation.  POM relied on the canon disfavoring implied repeals of statutes and argued that the Lanham Act’s private causes of action could not be precluded by the FDCA unless the current version of FDCA could somehow be viewed as an implied repeal of the Lanham Act.  Coke argued that the case merely required the Court to reconcile two statutes and, relying on the canon that a more specific statute should control over a more general one, Coke claimed that the more specific statute (the FDCA, which addresses food labeling) should control over the more general Lanham Act (which governs all sorts of commercial deception).

To the Court, however, the case required no such choice.  The Court reasoned that, even without any application of the stringent canon against implied repeals, Coke “is incorrect that the best way to harmonize the statutes is to bar POM’s Lanham Act claim.”  That statement occurs about half way through the Court’s opinion, and it seems – at first glance – to decrease the intellectual importance of the case tremendously.

Even outside the narrow circle of lawyers interested in the intersection of Lanham Act and FDCA, a much broader audience of generalist lawyers might have thought the case would provide some important new teachings about the appropriate way to choose between competing canons of statutory construction.   The Court’s opinion, however, avoids the more general issues of statutory construction and resolves merely the narrow statutory issue presented by the case.

Yet despite the Court’s unwillingness to use POM to resolve any global issues about the correct methodology for statutory interpretation, the decision is still highly notable for at least two reasons.

First and perhaps most importantly from a practical matter, the combination of the Court’s decision in this case and its Court’s earlier decision in Lexmark is almost certain to produce a significant expansion in competitors bringing Lanham Act claims against each other over false or misleading statements.   POM and Lexmark vividly demonstrate the power of those private rights of action and also show that, although the lawsuits might pit merely one business against another, such litigation has the potential to benefit consumers, who may find commercial statements more reliable.  Even if POM’s effect were merely to cement this “triumph of the Lanham Act,” that would be important.

A second important point about POM is that the reasoning in the decision shows the Supreme Court’s increasingly ambivalent approach to administrative regulation.  More than a century ago, administrative agencies were often cast in nearly heroic terms; they were thought to be wise experts who could bring intelligent, centralized regulation to remedy the abusive marketplace tactics.  In yesterday’s decision, however, the Court shows just how little is left of that notion.

Recall that the Ninth Circuit in this case had barred Lanham Act claims because they might “undermine FDA authority.”  The Supreme Court was not much concerned with that possibility because the Court recognized the limits of FDA’s competence.  Competitors, the Court noted, “have detailed knowledge regarding how consumers rely upon certain sales and marketing strategies” and an “awareness of unfair competition practices [that] may be far more immediate and accurate than that of agency rulemakers and regulators.”  The Lanham Act “draw[s] upon this market expertise by empowering private parties to sue competitors to protect their interests.” The combination of private Lanham Act suits and administrative enforcement under the FDCA “takes advantage of synergies among multiple methods of regulation.”

Just last year, in City of Arlington v. FCC[AH1] , three Justices joined an extraordinary dissenting opinion that expressed deep hostility to expansive administrative power.  That opinion asserted that it would be “a bit much” – only a bit! – to describe the modern administrative state as “the very definition of tyranny,” but that “the danger posed by the growing power of the administrative state cannot be dismissed.”  One of the Justices joining that opinion was Justice Kennedy, who also authored the Court’s opinion yesterday.  It is thus hard not to think that some of the reasoning in this case reflects a new skepticism – or perhaps it should be described as a healthy realism – about the capabilities of administrative agencies.  That’s an important and long-term shift, and it’s likely to have other effects in other cases where private rights of action serve as substitutes for administrative regulation.

[Disclosure:  The law firm of Goldstein & Russell, P.C., whose attorneys contribute to this blog in various capacities, was among the counsel to the petitioner in POM Wonderful and among the counsel to the petitioners in City of Arlington.  However, the author of this post is not affiliated with the firm, and I am no longer affiliated with the firm either.]