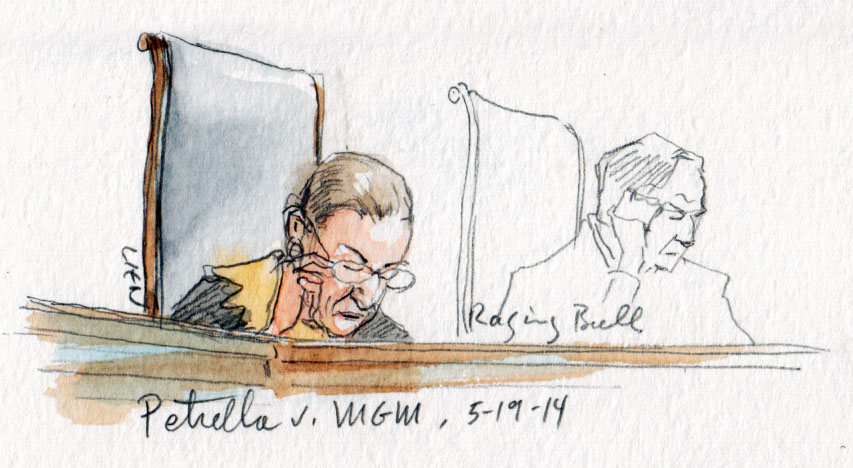 The case involves a question of copyright law — specifically, how to decide if a suit is brought in a timely manner.  The Act has a three-year statute of limitations, so ordinarily you could bring suit for any act of infringement that occurred in the last three years.  As it happens, a literal application of that rule could result in suits brought many years after the relevant events.  For example, this case involves a screenplay written in 1963 (currently held by petitioner Paula Petrella) that arguably is the basis for the 1980 movie Raging Bull.  Although Petrella obviously was aware of the movie, she did not bring suit until 2009.

Under the applicable statute of limitations, she could recover damages for infringements in the last three years (profits from exploiting the movie since 2006), as well as injunctive relief against future infringement (the owners of the movie would have to reach an agreement with her if they wanted to continue to exploit the movie). Respondent MGM argued that, compared with the date of the movie (and Petrella’s awareness of it), the suit had been brought so late that it should be barred by laches even as to the last three years.

The district court and the Ninth Circuit agreed with MGM and dismissed the case, but the Supreme Court disagreed.  Justice Ginsburg (writing for a six-Justice Court) largely adopts the analysis of Petrella (represented by Stephanos Bibas).  The opinion rests on a highly formalistic distinction between damages (legal relief) and injunctions (equitable relief).  Because laches is an equitable doctrine, it can have no role in determining the timeliness of an action for damages.  The Court acknowledges that courts often have applied laches to assess timeliness for causes of action without a statute of limitations, but it insists that the Court has never relied on laches to invalidate a suit brought within a time limit set by federal statute. There is, then, no basis for dismissing the suit for damages.

The opinion is written as if the argument for statutory primacy carries the day entirely.  The most substantial contrary argument seems to be the argument that suits brought so late will pose a risk of lost evidence. The Court is satisfied to point out that the Copyright Act necessarily contemplates suits decades after a work is written, given that the renewal provisions that only kick in twenty-eight years after the work is created.

Perhaps the most interesting part of the opinion relates to injunctive relief.  The Court starts by saying that the doctrine of estoppel might bar the claim entirely – if, for example, Petrella had told MGM that she would not bring suit (something MGM apparently cannot establish).  And even the doctrine of laches could bar equitable claims, at least in “extraordinary circumstances.”  The Court offered an example, a Seventh Circuit case in which the defendants, with the full knowledge of the plaintiffs, built a 168-unit housing development that arguably relied on plans copyrighted by the plaintiffs; the Court agreed with the Seventh Circuit’s conclusion that the copyright owners could not thereafter require the building to be destroyed.

Having offered that example, the Court was emphatic in its conclusion that this case does not present extraordinary circumstances, in part because the relief Petrella seeks “would not result in total destruction of the film, or anything close to it.”  The Court suggested that the trial court might take Petrella’s delay into account in fashioning relief, but it was plainly wrong to reject the suit at the outset.  Copyright lawyers will be pleased that the Court included the discursive explanation of when circumstances might be “extraordinary”; many writers would not have added that analytically unnecessary passage to an opinion.

Justice Breyer, joined by the Chief Justice and Justice Kennedy, dissented at considerable length.  His general thesis was that actions like these seemed to him in fact inequitable, and to impose unreasonable burdens on those who exploit copyrighted works.  He also believed that the frequency with which copyright owners bring these long-delayed actions made it important to rein them in.  That argument, of course, cut the other way for most of the Justices, who thought that the frequency of late-copyright lawsuits suggests that there is nothing unusual about this suit.

The most surprising thing about the opinion to me is the stark formality of the doctrinal analysis. The firm distinction between legal and equitable remedies seems quite outmoded.  A strong amicus brief by well-known remedies scholars offered a number of alternate analytical frameworks that could have modernized the doctrinal framework.  But that work I suppose will have to wait for another day.

PLAIN LANGUAGE SUMMARY: The owner of a screenplay brought suit against MGM almost twenty years after the release of the famous movie Raging Bull.  That law suit is not too late, even though there is no obvious reason why the owner could not have sued earlier.