Yesterday, the nine Justices of the Supreme Court convened in a packed courtroom to hear oral arguments in two high-profile cases.  But the real drama came before the oral arguments even started, when Chief Justice John Roberts announced that Justice Anthony Kennedy would deliver the Court’s decision in Schuette v. Coalition to Defend Affirmative Action, the challenge to an amendment to the Michigan constitution that bans the use of affirmative action by public universities there.  (My earlier Plain English coverage of the case is available here.)

Justice Kennedy began by explaining what “this case is not about.”  It is not about whether state universities can voluntarily consider race in their admissions process, nor is it about whether it’s a good idea for them to do so.  Instead, Kennedy emphasized, the question before the Court is whether voters can choose to prohibit state universities from considering race.  And the answer to that question, we learned yesterday, is yes. 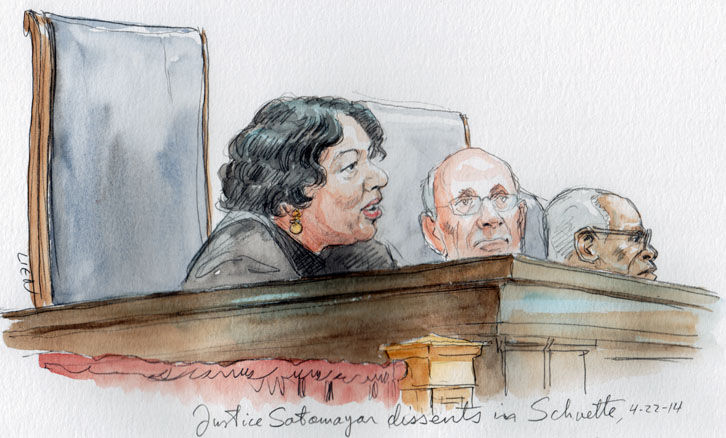 A lower court had struck down the Michigan ban.  It had relied on two decades-old decisions by the Supreme Court, which it interpreted as requiring a very strong justification for measures with a “racial focus” that make it comparatively harder for minorities to get legislation that benefits them passed.  But that interpretation read too much into those cases, Kennedy wrote yesterday, because their facts were different.  And, Kennedy continued, that rule would be all but impossible to implement:  among other things, courts would have to assume that members of the same race all think alike (about which Kennedy expressed serious doubt) and define individuals according to their race (not always an easy task these days, Kennedy noted).

Instead, Kennedy concluded, whether public universities in Michigan should use racial preferences in their admissions process is a question for the voters of Michigan, who “exercised their privilege to enact laws as a basic exercise of their democratic power.”  Here Kennedy pointed out that the Constitution protects not only individual rights, but also the collective “right of citizens to debate so they can learn and decide and then, through the political process,” take action together.  The Court can’t decide that an issue like affirmative action is too hard or too “delicate” for voters to take on; doing so would be both an “unprecedented restriction” on the voters’ ability to exercise their joint right and “demeaning to the democratic process.”  And, in any event, Kennedy predicted, the voters may eventually change their minds and vote to reinstate affirmative action.

Much like the rest of the country, yesterday’s decision displayed the wide range of views among the Justices on questions of race.  Only the Chief Justice and Justice Samuel A. Alito joined Justice Kennedy’s opinion upholding the Michigan ban.  Justice Antonin Scalia (in an opinion joined by Justice Clarence Thomas) agreed that the ban should survive, but he would have overruled altogether the older decisions on which the lower court relied.

Justice Stephen Breyer, whom many think of as part of the Court’s more liberal wing, provided a sixth vote to uphold the Michigan ban.  (Justice Elena Kagan did not participate in the case, presumably because she was involved in it when she was the Solicitor General of the United States.)  But his reasons were different.  He relied on two factors:  Michigan’s state universities had been considering race in their admissions process not to address past discrimination, but for the less significant reason that the universities believed that a diverse student body had educational benefits; and the Michigan amendment transferred the authority to make decisions about affirmative action from “unelected faculty members and administrators” at the universities to Michigan voters themselves.

In an interview with Yale Law School’s Linda Greenhouse earlier this year, Justice Sotomayor explained that the practice of reading a dissent out loud in the courtroom had “become a signal of how fiercely someone believes that the Court is wrong.” For the first time since she became a Justice in 2009, Sotomayor dissented from the bench herself, in a lengthy summary which left little doubt about the strength of her disagreement with the Court’s decision.  In an opinion that was joined by Justice Ruth Bader Ginsburg, Sotomayor – who grew up in the housing projects of the Bronx and has described herself as “the perfect affirmative action baby” – did not pull any punches.  She accused her colleagues of reaching a decision that “fundamentally misunderstands the nature of the injustice” created by the Michigan amendment.  She emphasized that, although the Michigan amendment had strong support among voters, it is a bedrock principle of constitutional law that there are limits on what the majority of voters can do.  They can’t, she argued, “change the ground rules of the political process in a manner that makes it more difficult for racial minorities alone to achieve their goals.”

But, she continued, the Michigan amendment does exactly that, by making it much harder to advocate for and implement admissions policies that consider race.  The only way to eliminate Michigan’s challenged ban on affirmative action is to amend the state constitution again, which can be a tedious and expensive process.  But if you wanted to make other changes to a university’s admissions programs – for example, to make it easier for children of alumni to gain admission – you can just go to the board of trustees.

Sotomayor also outlined her views on race more generally, which (it will not be surprising) bear little resemblance to those expressed by her colleagues in the majority.  She explained why “race matters”:  because of the “long history of racial minorities being denied access to the political process”; because of the “persistent racial inequality” that remains today; and – in a paragraph that appears deeply personal – because “of the slights, the snickers, the silent judgments that reinforce the most crippling of thoughts:  ‘I do not belong here.’”  In a not-so-subtle jab at the Chief Justice’s 2007 statement that “the way to stop discrimination on the basis of race is to stop discriminating on the basis of race,” she wrote that “[t]he way to stop discrimination on the basis of race is to speak openly and candidly on the subject of race.”  (As Mark Walsh reported yesterday for this blog, the Chief Justice’s only reaction to this dig came in his written concurring opinion, in which he observed that, although “people can disagree in good faith on this issue, . . . it . . . does more harm than good to question the openness and candor of those on either side of the debate.”)

What will the decision mean going forward?  At the most basic level, it means that Michigan’s ban on the use of affirmative action by public universities will stand.  Several other states are likely to follow suit, banning affirmative action not only in the realm of public higher education but in other areas – such as employment decisions and public contracting – where governments currently consider race.  The Justices’ respite from the fight over affirmative action may be brief, and the Court may soon be asked to consider once again the constitutionality of an affirmative action program adopted by the University of Texas.  When that case arrives, we’ll be sure to cover it in Plain English.

Disclosure: Kevin Russell of Goldstein & Russell, P.C., whose attorneys contribute to this blog in various capacities, was among the counsel on an amicus brief in support of the respondents in this case, but I am not affiliated with the firm.