A “view” from the Court: Big arguments, preceded by an even bigger opinion

It’s the second-to-last week of oral arguments of the Term, and some of the last big cases are being argued. The courtroom is packed and filled with anticipation, not so much for the first case to be argued today but the second.

The first case is Susan B. Anthony List v. Driehaus, in which the underlying issue is Ohio’s statute prohibiting false political speech, though before the Court is a drier question of who may challenge such a law and when. This is a pretty interesting case in and of itself, especially if one reads the amicus brief of the Cato Institute and the humorist P.J. O’Rourke. 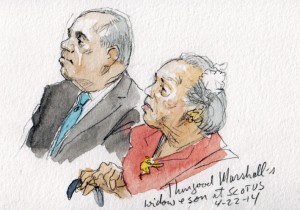 Thurgood Marshall’s son and widow seated in courtroom as opinion in Schuette is announced. (Art Lien)

But most of the dapper lawyers filling the bar section this morning appear to be here for the second case, American Broadcasting Cos. Inc. v. Aereo Inc., about the legality of the upstart Aereo’s plan of taking broadcast signals using tiny antennas and offering its customers live TV signals over the Internet without paying re-transmission fees to broadcasters

These well-dressed members of the telecommunications bar will be tapping their Gucci loafers a little longer than they expected before getting to that case. Such an anticipated case might normally be argued first in the day. But when a member of the Court has recused himself or herself, that case is often scheduled as the second argument, allowing the Justice in question to take the bench for the first case, then relatively inconspicuously slip out during the brief break between the first and second cases.

That may explain why the Aereo case was scheduled second today, because Justice Samuel A. Alito Jr. was originally recused. (The Justices typically don’t publicly explain why they are removing themselves.) Last week, however, the Court announced that Justice Alito would be participating in the Aereo case after all.  Presumably he sold his stock in one or more of the corporate parties in the case, and thus no longer had a conflict, but there was no confirmation of that.

Before either case is argued, we will get opinions this morning. In my capacity as someone who writes frequently about education law, I received (secondhand) an email from a prominent education organization on Monday suggesting that today was the day for the Court’s long-awaited decision in Schuette v. Coalition to Defend Affirmative Action, about Michigan’s ballot-enacted prohibition on considering race in college admissions.

It’s not unusual for these types of emails to circulate in Washington, especially in June, when groups claim to know that a particular decision is coming down on a given day. Since the Court does not announce what’s coming in advance, most reporters pay little heed to such messages, which usually turn out to be wrong. Still, since it is only April, I think to myself that the education group’s prediction is unusually specific.

Among the visitors to the Court today is Cecilia Marshall, the widow of the late Justice Thurgood Marshall, who is a frequent presence for big arguments and other events. She is joined in the front row of the public gallery by her son Thurgood Marshall Jr., known as “Goodie,” who has served in government but is now a lawyer in private practice.

Just minutes before the Justices take the bench, Christopher J. Dodd, the CEO of the Motion Picture Association of America and a former Democratic senator from Connecticut, takes a seat near the Marshalls. I’m assuming that while as a former politician he may well be interested in a state law that bars false political speech, he is probably here for Aereo.

The Justices take the bench, and Justice Clarence Thomas has the first opinion of the day, in Navarette v. California. In announcing a five-to-four decision upholding a police traffic stop that turned up a large stash of illegal drugs in the bed of a pickup truck, Thomas has a rare spontaneous moment in his opinion delivery. A motorist “probably shouldn’t carry around thirty pounds of marijuana,” he says to light laughter in the courtroom. This Fourth Amendment case is one where the court’s usual ideological lineup is shaken up, with Justice Stephen G. Breyer joining the majority and Justice Antonin Scalia writing for the dissenters. (Though that lineup has not been so surprising in recent years in Fourth Amendment cases.)

It will not be the last time today that Justice Breyer refrains from joining his liberal allies.

Next, confirming the speculation of a certain education group, the Chief Justice says that Justice Anthony M. Kennedy will announce the Court’s judgment in Schuette. This is a big deal, and that prompts some consternation in the press rows, since it is already a busy day with two big arguments to come.

Justice Kennedy quickly notes that he has the judgment of the Court, and not a majority opinion, though the line-up isn’t clear right away. He also quickly addresses what the case “is not about.”

“It is not about the constitutionality, or the merits, of race-conscious admissions policies in higher education,” he says. “This case is not about how the debate about racial preferences should be resolved. It is about who may resolve it. There is no authority in the Constitution of the United States or in this Court’s precedents for the Judiciary to set aside Michigan laws that commit this policy determination to the voters.”

We’re pretty sure he said this last part in court, though Justice Kennedy, unlike some of his colleagues, does not routinely provide the text of his bench announcements — the summary the justice reads from the bench — to reporters. The announcements, though they hew closely to the text of the actual decision, are often slightly more conversational or have other minor differences.

“Here Michigan voters acted in concert and statewide to seek consensus and adopt a policy on a difficult subject against a historical background of race in America that has been a source of tragedy and persisting injustice,” Justice Kennedy continued.

“Perhaps, when enacting policies as an exercise of democratic self-government, voters will determine that race-based preferences should be adopted,” he says. (Again, pretty sure he said that in court, too.) “The constitutional validity of some of those choices regarding racial preferences is not at issue here. The holding in the instant case is simply that the courts may not disempower the voters from choosing which path to follow.”

Justice Elena Kagan did not participate in the case.

Justice Sotomayor begins reading from it, noting at the top that “Justice Ginsburg and I respectfully dissent.”

“My colleagues fundamentally misunderstand the nature of the injustice worked” by the Michigan ballot measure, she says. (No copy of Justice Sotomayor’s bench announcement either.)

“This case is not about ‘who may resolve’ the debate over the use of race in higher education admissions,” she says. “I agree wholeheartedly that nothing vests the resolution of that debate exclusively in the courts or requires that we remove it from the reach of the electorate. Rather, this case is about how the debate over the use of race-sensitive admissions policies may be resolved—that is, it must be resolved in constitution-ally permissible ways.”

The view essentially embraced by the six Justices in the judgment that questioning the wisdom of race-conscious admissions is at odds with the Court’s recognition “that race-sensitive admis- sions policies are necessary to achieve a diverse student body when race-neutral alternatives have failed. More fundamentally, it ignores the importance of diversity in institutions of higher education and reveals how little my colleagues understand about the reality of race in America.”

Sotomayor goes on for more than fifteen minutes from her fifty-eight-page dissent. During this time, her colleagues look rather grim, often peering down at briefs or other paperwork. An exception is Justice Kagan, who in keeping with the Court’s practice stays on the bench even as a decision she did not participate in is announced. She looks around the courtroom with a smile that suggests, “I had no role in this.”

Justice Sotomayor continues, often reaching what seems like it might be her rhetorical closer, only to continue for several more minutes each time. But she saves her sharpest lines for the end.

“The way to stop discrimination on the basis of race is to speak openly and candidly on the subject of race,” she says, “and to apply the Constitution with eyes open to the unfortunate effects of centuries of racial discrimination.”

She didn’t say so in the courtroom, but it is immediately evident she is responding pointedly to Chief Justice Roberts’s best-known line from his majority opinion in Parents Involved in Community Schools v. Seattle School District.  In that 2007 decision, which curtailed the permissible ways that elementary and secondary schools could take account of race, the Chief Justice had said: “The way to stop discrimination on the basis of race is to stop discriminating on the basis of race.”

Roberts has no visible reaction as Justice Sotomayor reads her last lines. Only upon digging into the written opinion will we see that he has responded in his short concurrence, saying that “people can disagree in good faith on this issue, but it … does more harm than good to question the openness and candor of those on either side of the debate.”

Justice Scalia, in his own written concurrence, has some sharp words for Sotomayor as well. He says it is “doubly shameful,” to equate, as he suggests the dissent has, the majority behind Michigan’s ballot initiative with the majority responsible for Jim Crow.

Three weeks ago, despite their serious differences in the contentious campaign-finance case of McCutcheon v. Federal Election Commission, Chief Justice Roberts and Justice Breyer practically fell over each other in displays of civility as the decision was announced from the bench.  (The Chief Justice lauded the dissent for doing its job to make him think hard about his conclusions, while Justice Breyer said the majority opinion was well-written, even though he didn’t agree with it.)

Today, the rancor of the Court’s bitter spring of 2007, which included sharp opinions and dissents not only in Parents Involved but also Gonzales v. Carhart (on so-called partial-birth abortion) and Ledbetter v. Goodyear Tire and Rubber Co. (on women’s pay equity), has returned, at least for a day.