Update on the October Term 2013 docket

Four months into the new Term, several trends are beginning to appear in the Court’s docket. The Court is likely done granting cases for argument during the Term, it has heard more than half of all oral arguments, and about one-fifth of all opinions have already been issued.

Pace of Grants: An unusually large number of cases have been dismissed after being granted for consideration on the merits.  Already this Term, seven cases have been dismissed, dwarfing the totals from recent years: one during OT12, four during OT11, and two during OT10. The cases dismissed this Term met their fates for several different reasons. Three were dismissed because other courts acted on the cases in ways that rendered them unfit for resolution right now (Burnside v. Walters; U.S. Forest Service v. Pacific Rivers Council; Cline v. Oklahoma Coalition for Reproductive Justice), two were settled by the parties (Mount Holly v. Mt. Holly Gardens Citizens in Action, Inc.; UBS Financial Services Inc. v. Unión de Empleados de Muelles de Puerto Rico), and two were dismissed after oral arguments at which quirks in the cases could not be patched up (Madigan v. Levin;Unite Here Local 355 v. Mulhall).

The number of dismissals this year – both before and after argument – have thrown some complexity into our normally simple tally for the number of merits opinions expected during the Term. This year, because there were seventy-five cases granted for oral argument, five dismissed before argument, and two dismissed after argument, we expect to see sixty-eight signed opinions on the merits. By adding the two summary reversals, we reach a tally of seventy total opinions expected on the merits. 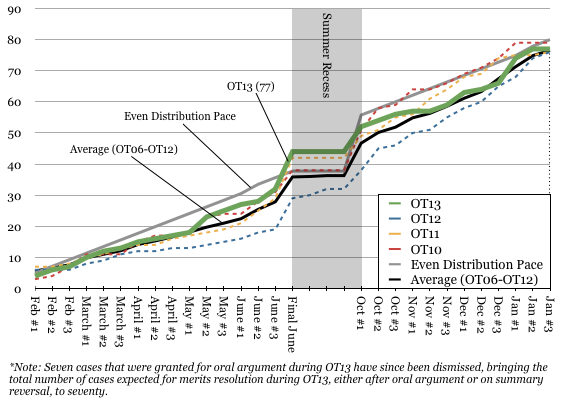 If the Court ultimately decides only sixty-eight cases after oral argument, OT13 would fall squarely within a range set in recent years. During the Roberts Court (OT06-present), the Justices have decided, on average, 70.3 merits opinions after oral argument, with individual Terms yielding between sixty-five and seventy-five opinions. If the Court had issued rulings on the merits in all seventy-five cases that were granted for argument, it would have been only its third time doing so during the Roberts Court.

Pace of Opinions: During OT13, the Court has followed its usual pace of issuing opinions, releasing two summary judgments and thirteen merits opinions after oral argument. During the Roberts Court, the Justices have issued an average of sixteen opinions through the end of the January sitting. 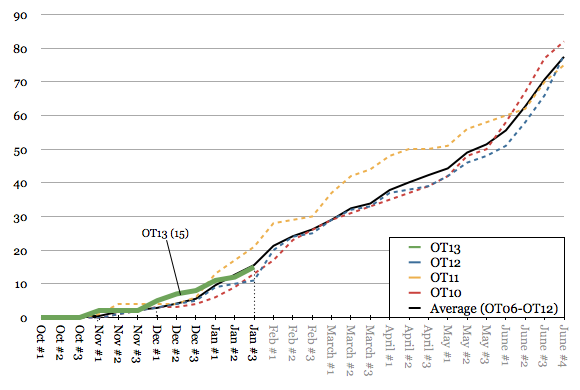 Outside of the Office of the Solicitor General, John Bursch, Paul Clement, Tom Goldstein, and Neal Katyal lead the pack with three arguments each through January. William Messenger, Mark Perry, Kevin Russell, and Eric Schnapper round out the group of advocates who have argued at least twice during the Term.

Of all the repeat advocates, including those coming from the Solicitor General’s office, only William Messenger argued at the Court for the first time during OT13. In fact, the twenty-three advocates who have argued more than once during OT13 have a combined overall total of 593 oral arguments.  Leading the group are longtime Deputy Solicitors General Edwin Kneedler (123) and Michael Dreeben (91). Solicitor General Verrilli, who assumed office in June 2011 with twelve oral arguments, has argued twenty-one times since then.

Make-up of the Merits Docket: For the third consecutive Term, the Court is not expected to issue any decisions on the merits in an original case – that is, a case brought to the Court under its original jurisdiction. Over the past decade the Court has released a merits opinion in two or fewer original cases per Term, typically issuing one opinion or occasionally none.

The Court has granted only three federal habeas cases, an unusually small number. Over the past three years the Court has issued an average of 9.7 merits opinions in habeas cases each Term.