We gave you a chance: Today’s Shelby County decision in Plain English

Four years ago, in a case called Northwest Austin Municipal Utility District No. 1 (NAMUDNO) v. Holder, the Supreme Court reviewed a challenge to the constitutionality of the preclearance provisions of the Voting Rights Act.  As I explained in an earlier post, that portion of the Act was designed to prevent discrimination in voting by requiring a list of state and local governments identified by Congress in the 1960s as having a history of voting discrimination to get approval from the federal government before making any changes to their voting laws or procedures – both major changes and even for something as seemingly innocuous as moving a polling place across the street.  In that case, the Court ultimately dodged the constitutional question, handing the utility district a victory on another ground.  But at the same time, the Court fired off a cautionary shot to Congress, admonishing it that “[t]hings have changed in the South,” where most of the state and local governments that have to comply with the preclearance requirements are located, and that the burdens imposed by the preclearance requirements “must be justified by current needs.” 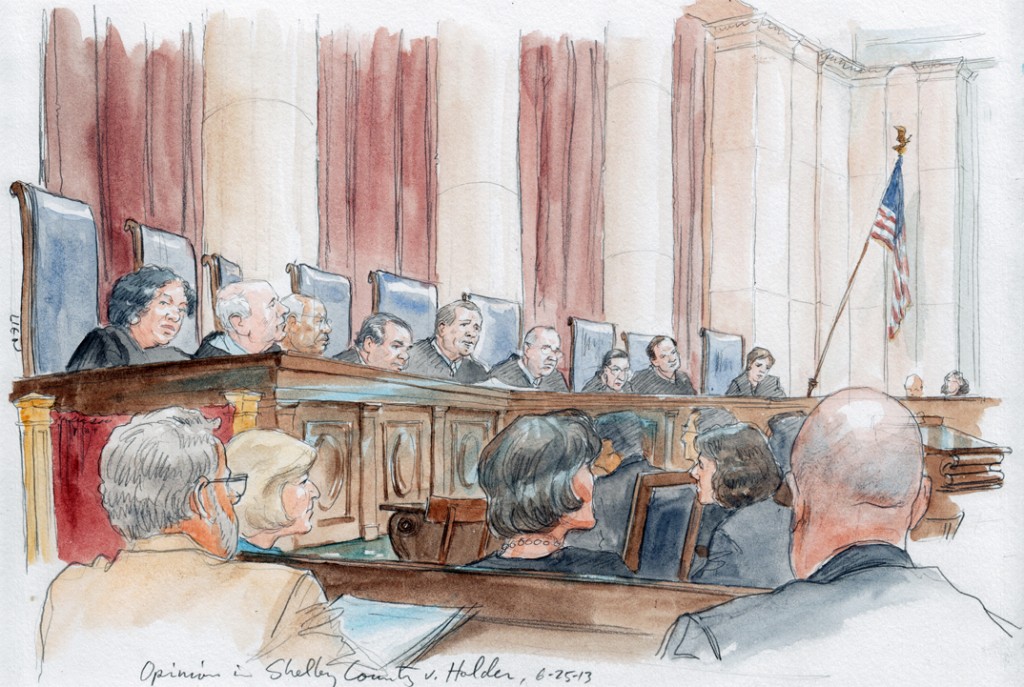 Today’s decision in Shelby County v. Holder, a new challenge to the preclearance requirements, boils down to a new message to Congress:  we warned you, you didn’t listen, and now it’s your problem to fix.  The Court did not invalidate the actual preclearance provision of the statute.  But it did something just as significant:  it struck down Section 4 of the Act, which contains the formula that is used to identify the state and local governments that have to comply with the preclearance requirements.  The upshot is that although the preclearance requirement survives, none of those jurisdictions have to comply with it unless and until Congress can enact a new formula to determine whom it covers – a prospect that, given the current state of gridlock in Congress, might not happen for a while or even forever.  (It is also possible that the federal Department of Justice could bring new lawsuits under a separate provision of the Act to extend the preclearance provisions to new jurisdictions, but today’s decision could make it much harder for the government to win those suits too.)

The Chief Justice delivered the opinion of the Court, which was joined by Justices Scalia, Kennedy, Thomas, and Alito.  The Court began by acknowledging that when the Voting Rights Act was enacted, it “employed extraordinary measures” – in the form of restrictions on the independence of the covered states – to combat the “extraordinary problem” of widespread voter discrimination.  In 1966, the Court explained, these restrictions, which were intended to be temporary, were justified, and the formula used to determine who should be covered “made sense” then.

But today, fifty years later?  Not so much.  In the Court’s eyes, “things have changed dramatically.”  When judged by a variety of measures – such as voter registration, voter turnout, and the number of African Americans elected to office — conditions have improved significantly in the states that are covered by the preclearance requirements.  The Court agrees that these changes “are in large part because of the Voting Rights Act”; despite those improvements, the Court complains, the formula that determines who must comply with the preclearance requirement is “based on decades-old data” and practices – such as literacy tests – that were long ago abandoned.  Because it isn’t fair for Congress to “rely simply on the past” to single out a few state and local governments for unequal treatment “based on 40-year-old facts having no logical relationship to the present day,” the coverage formula cannot stand.

The last section of the Court’s opinion is the judicial version of throwing the Voting Rights Act ball back across First Street N.E. to Congress.  Emphasizing that invalidating a federal law is one of its most serious responsibilities, and that it “do[es] not do so lightly,” the Court makes clear that in its view, only Congress is to blame here.  Four years ago, it warned Congress that the constitutionality of the law was in doubt; “Congress could have updated the coverage formula” then, but it failed to do so. “Its failure to act,” the Court explains, “leaves us today with no choice but to declare [the coverage formula] unconstitutional.”

Continuing a pattern that we have seen in several other cases this week, Justice Ruth Bader Ginsburg filed a dissenting opinion, which was joined by Justices Breyer, Sotomayor, and Kagan.   Where the majority had cited improvements in voter registration and voter turnout as support for its conclusion that the Act’s coverage formula was unconstitutional, the dissenters focus on other, more subtle discriminatory tactics, such as racial gerrymandering, that are used to dilute the impact of minority votes.  Congress voted to renew the preclearance requirement and the coverage formula, the dissenting Justices argue, because it concluded – based on a “massive legislative record” – that they were still needed to head off these tactics.    And given Congress’s special role in enforcing constitutional provisions prohibiting racial discrimination in voting, the dissenters would defer to that determination.

When the Court issued yesterday’s decision in Fisher v. University of Texas at Austin, civil rights groups breathed at least a qualified sigh of relief.  After months of worrying that the Court might prohibit the use of affirmative action in higher education altogether, affirmative action survives – at least for now.  By contrast, today’s decision was pretty much as bad as voting rights groups had feared:  although the Court did not strike down the preclearance requirement, it rendered it essentially ineffective until Congress can decide who should be covered by the requirement going forward.  And no one expects that to happen anytime soon.

[Disclosure:  The law firm of Goldstein & Russell, P.C., in which I am a partner, was among the counsel on an amicus brief in support of the respondents in this case, but I was not involved in the case at all.]